ENENews with the latest devastating result of the 2011 earthquake and tsunami crippling Japan’s Fukushima nuclear plant and the radiation that flooded the atmosphere as well as the radioactive water pouring into the Pacific, hundreds of tons daily.

US Naval members from the USS Ronald Reagan crew with thyroid cancers, leukemia, brain tumors, bleeding, blindness after Fukushima disaster, people 21, 22 and 23, years old going blind. Sailors are now suffering the effects of the Fukushima disaster, 70-75 of which are now suing, according to attorney Charles Bonner, who is representing them.

Charles Bonner, attorney representing sailors from the USS Ronald Reagan: They’re not only going to the rescue by jumping into the water and rescuing people out of the water, but they were drinking desalinated sea water, bathing in it, until finally the captain of the USS Ronald Reagan alarmed people that they were encountering high levels of radiation. As a result of this exposure, the 51 sailors that we represent right now have come down with a host of medical problems, including cancers and leukemias, all kinds of gynecological problems […] people who are going blind, pilots who had perfect eyesight but now have tumors on the brain. These service men and women are young people 21, 22, 23 years old and no one in their family had ever (inaudible) any of these kinds of illnesses before.

Bonner: These sailors had none of these kind of medical problems, now they have back pains, memory loss, severe anxiety. They have testicular cancer, they have thyroid cancers, they have leukemias, they have a host of problems, rectal and gynecological bleeding, a host of problems that they did not have before […] And it’s only been 3 years since they went in. […] The Japanese government is in a major conspiracy with Tepco to hide and conceal the true facts. 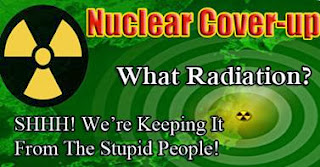