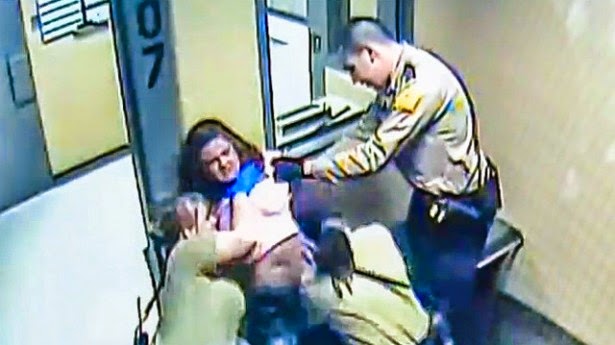 In the very disturbing video below we see a case that has been highlighted and is going national.  A woman, Tabitha Gentry, arrested on a misdemeanor is forcibly stripped naked by four cops in Indiana, left in a holding cell, then pepper sprayed when she started banging on the door pleading for her clothes back.


The original video was released by the woman’s attorney and the actions of the police department are being defended as normal procedure, by an Indiana sheriff.

The video shows Gentry in a jail cell with four officers, and two of them are male. After Gentry tries to stand up, the officers take her to what the jail called a “padded room.”

“Almost immediately upon entering the jail, she’s assaulted by four officers. They grab her around the neck, they grab her body,” Landenwich explained. “They hold her down… There are two male officers and two female officers and they forceably remove her pants, her shoes, her underwear and her shirt and bra.”

“Terrified and humiliated, she’s banging on the door asking someone to give her her clothing and someone comes to the door and says, ‘If you don’t shut up, I’m going to pepper spray you,’ and sure enough, they open the door, spray pepper spray into the room and they leave – and they leave her in there for 40 minutes, naked, in a cell filled with pepper spray.”

Officials at the Floyd County Jail, where this incident occurred, then gave her just a blanket before taking her out through the booking area, where anyone there could see her, to wash her eyes out, before returning her to the cell and leaving her naked, with just the blanket, for another five hours.


This case is discussed by The Young Turks in the video below.