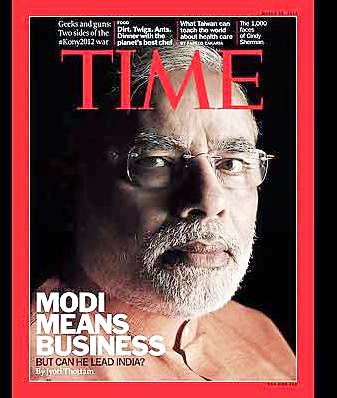 Global Research 21/5/2014
Apparently, the results of the national general election in  mark a turning point. We are told that the nation has spoken and has given the new Prime Minister Narendra Modi and his BJP party a ‘landslide victory’. Despite the euphoria, however, only 31% of votes cast were for the BJP. That’s hardly a ringing endorsement. But it was enough to give the BJP a ‘landslide’ in terms of parliamentary seats. No party in  has ever won over half the seats with such a low share of the vote. The previous lowest vote share for a single-party majority was in 1967, when Congress gained 40.8% of the votes polled.
With calls from some of Modi’s advisors for a Thatcherite-style, pro-privatisation revolution in India (1), it is worth recalling how successive Thatcher-led governments in Britain brought immense damage to the social and economic fabric of the country to profit her rich backers on the back of similar ‘landslide’ victories based on similar shares of the vote (2).
There was never a ringing endorsement in  for the policies of Thatcher. The opposition was weak and split and many bought into to her platitudes about privatisation, the feckless poor, the virtues of the free market and rolling back the state as a proxy for ’s woes at the time. Similarly, notwithstanding a fragmentation of the vote which has helped the BJP into power, disillusionment with the Congress Party in  has led many voters to buy into the rhetoric of the charismatic Modi who is regarded by many as someone that can get things done. Like Thatcher, he is seen as a strong leader who will act when others have fudged and procrastinated.
The type of ‘development’ being pushed through in  is underpinned by unconstitutional land takeovers, cronyism, corruption, violence and the trampling of democratic rights (3,4,5). And for all the talk of the wonders of opening up markets and economic neo-liberalism, the poverty alleviation rate in India remains around the same as it was back in 1991 (0.8 percent), while the ratio between the top and bottom ten percents of the population has doubled during this period (6).
In , which has fully embraced the neo-liberal model of ‘development’ under the leadership of Chief Minister Modi, hundreds of thousands of farmers, fishermen, pastoralists and agricultural workers have been displaced from their land. Since 2001, some 16,000 farmers and workers have committed suicide due to economic distress (7).  has the highest prevalence of hunger and lowest human development indices among states with comparable per capita income. The high level of malnutrition is a consequence of extremely low wage rates, malfunctioning nutrition schemes and lack of potable water supplies and sanitation. Over two thirds of households defecate in the open, resulting in high levels of jaundice, diarrhoea, malaria and various other diseases (8). Unregulated pollution has destroyed farmers and fishermen’s livelihoods and has subjected local populations to diseases and death (9). Moreover, GDP ‘growth’ in  is underpinned by debt. The state’s debt increased from approximately 7,716 million US dollars in 2002 to 23,672 million US dollars in 2013 (10).
Hand in hand with privatisation,  has also witnessed massive corruption (this is not unique to , it is a symptom of neo-liberalism: since 1991, whenIndia began to embrace neo-liberalism, the outflow of illicit money from the Indian economy has accelerated, 11). Writer Rohini Hensmen provides details about the levels of “stupendous” corruption and argues that those who have campaigned against it have “not fared well” (12). He goes on to state that ‘s growth has been achieved at the cost of handing over complete control over the economy to private interests. Economist Shipra Nigram agrees:

“Key sectors — traditionally held to be the preserve of the state — such as ports, roads, rail and power have been handed over to corporate capital. This has meant, inevitably, that the government has abdicated all decision making powers, as well as functional and financial control over such projects. Nowhere else in the country has this abdication of responsibility been so total, nowhere else has the state given over the economy so entirely to the corporates and private investors.” (13)

Fast-tracking plunder
With a new national BJP administration headed by Narendra Modi coming to power and the backing of ’s ruling corporate elite, is this the type of ‘development’ we can expect to see being fast tracked? Can we also expect to witness an accelerated ‘restructuring’ of agriculture in favour of Western agribusiness and more farmers to be forced from their land? Can we expect ever increasing population displacement on behalf of commercial interests and rich resource-extraction companies?
Environmentalist Vandana Shiva has argued that what has been happening constitutes the biggest forced removal of people from their lands in history. According to a 2009 report commissioned by the rural development ministry and chaired by the then minister Raghuvansh Prasad Singh, it involves the biggest illegal land grab since .
It is no secret that officialdom wants to depopulate rural areas. In 2008, the then Finance Minister P.Chidambaram envisaged 85% of the population living in cities (14). That would entail at least 600 million being displaced from rural . And it is no secret who is driving this and who would benefit. US corporate agriculture interests have been granted license to influence key aspects of agriculture and food policy in India via not only controlling seeds and chemical inputs, but by also funding, controlling and thus distorting the scientific biotech research agenda in Indian universities and institutions (15) as a result of it having secured a pivotal role in negotiations between India and the US, not least the Knowledge Initiative on Agriculture (16).
Can we also expect to see the current corporate-driven, undemocratic free trade agreement being hammered out behind closed doors between the EU and  gain added impetus? As it stands, that agreement would see powerful trans-national corporations by-passing national legislation that was implemented to safeguard the public’s rights. We could see the Indian government being sued by multinational companies for billions of dollars in private arbitration panels outside of Indian courts if national laws, policies, court decisions or other actions are perceived to interfere with their investments. This is already a reality in many parts of the world whereby legislation is shelved due to even the threat of legal action by corporations. Such agreements cement corporations’ ability to raid taxpayers’ coffers via unaccountable legal tribunals, or to dictate national policies and legislation (17). Even the threat of legal action can compel governments to shelve legislation.
Is this now to be ’s future? One that mirrors what we have seen in the US, Britain and elsewhere – an unmitigated corporate heist and increased state surveillance via the all pervasive Central Monitoring System to help dampen dissent from those at the sharp end of the full-frontal assault of fast-tracked neo-liberalism and cronyism — because history shows that whenever a state spies on its own people, this is usually the reason why (18).
Can we expect ever more industrial developments built with public money and strategic assets, such as energy sources, ports, airports and infrastructure support for agriculture to be sold off?
Hostage to neo-liberalism
Do people really believe ’s future lies in tying itself to a corrupt, moribund system that has so patently failed in the West and can now only sustain itself by plundering other countries via war or lop-sided ‘free trade’ agreements, which have little if anything to do with free trade?
Neo-liberalism (the paradigm for modern day ‘globalisation’) is by its very nature designed to fail the majority and benefit the relative few. And its outcome is and will continue to be endless conflicts for fewer and fewer resources. Globally, expect more Syrias, more Iraqs, more Libyas, more Congos and more threats, bullying, sanctions and military encirclements of states like we see happening to Iran, Russia or China, courtesy of the US.
Its outcome is also environmental destruction and an elitist agenda by rich eugenicists who voice concerns over there being ‘simply too many mouths’ to feed (19). Those mouths would only take food from their rich bellies — bellies that long ago became bloated from the fat of the land, lucrative wars and the misery brought about by economic exploitation under guise of free market ideology.
We must look behind the rhetoric of those who espouse the virtues of the free market or neo-liberalism. The  achieved its level of affluence by way of thuggery not free market economics. Major General Smedley Butler, the ’s most decorated marine, said as much and listed various corporations on whose behalf he fought for during his various military campaigns. Little has changed since Smedley wrote about his experiences in 1935, if we turn our attention to US-backed conflicts in Libya, Iraq, Afghanistan and Ukraine and the banking, oil, gas and agri-tech firms that fuel and/or are intended to benefit from them.
Corporate-backed politicians in India have also seen little wrong in using the machinery and violence of the state to work hand in glove with rich interests to secure access to the nation’s resources, while attempting to justify its brand of plunder, human rights abuses, killings and cronyism by hiding behind platitudes about ‘opening up’ this or that sector of the economy, ‘progress’ and baseless claims about the wonders of the ‘free’ market.
Is this the type of ‘development’ that Indian people want to see fast tracked? Ultimately, this is what the minority who handed the BJP its landslide victory voted for. This is the type of ‘development’ they could well get.

“Since the cross-ownership of businesses is not restricted by the ‘gush-up gospel’ rules, the more you have, the more you can have… corporations buy politicians, judges, bureaucrats and media houses, hollowing out democracy, retaining only its rituals. Huge reserves of bauxite, iron ore, oil and natural gas worth trillions of dollars were sold to corporations for a pittance, defying even the twisted logic of the free market… leading to the siphoning off of billions of dollars of public money. Then there’s the land grab — the forced displacement of communities, of millions of people whose lands are being appropriated by the state and handed to private enterprise.” Arundhati Roy (20).