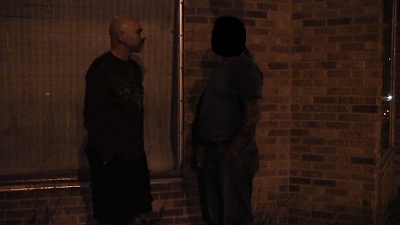 Alpena Mi. 8/25/2013 – In response to a story published by The Truth Is Viral a few days ago, Publisher Bobby Powell has been contacted by
several people with their own stories to tell. Late Saturday evening, in
a cloak and dagger meeting right out of a spy novel, one witness came
forward to tell his story for the record.

This witness,
a combat-wounded Army Ranger who has been an extremely vocal Patriot,
has experienced direct intimidation in the form of black vans with
tinted windows (but without license plates) parking down the street from
his house hacking into his WiFi and surveilling either him or the whole
block, and a visit from a Black Hawk helicopter that flew so low the
pilot could have trimmed the tree with his main rotor.

The
witness, who spoke on camera on the condition that his identity be
obscured, said that a Black Hawk helicopter buzzed his home twice, once
flying no more than 25 feet above the ground over his backyard. The
pilot hovered, he said, looked him dead in the eye for a few seconds,
then turned his aircraft and flew off.

Angered at what was
clearly an act of intimidation the witness said, “They can take my
blood, they can take my life, but they will never take the rights that
God granted me. Those are God-given, and there’s not a man walking on
this Earth that can come up against God and win.”

Operating
under cover of the largest air combat exercise in the country called
“Northern Strike,” the skies over Northeastern Michigan have been filled
with flights of attack helicopters, all fully loaded, flying back and
forth to the gunnery range at Camp Grayling. C-130’s have also been
landing at the Alpena Combat Readiness Training Center filled with
foreign troops taking part in these exercises, which include ground
operations. I personally ran into four individuals in the local Walmart
who bore all the hallmark signs of being Spetsnaz – Russian Special
Forces.

When I was in the Marine Corps, the Commies were still
our enemies. The Berlin Wall was still up, the Iron Curtain was still
down, and the Red Menace represented by China and the USSR were our
mortal enemies. Tasked with knowing our enemy, training on how to spot
enemy soldiers among the civilian population was a skill particularly
harped on by our Company Commander.

Not only did these guys
have the stern, square-jawed appearance of a steroid-popping Type-A
personality, they were speaking Russian; always a dead giveaway. Each
one of them carried one of those European-style man purses over their
shoulders, the bag itself resting on the side of their torso. I KNEW
these guys were packing heat.

Well, so was I. And I got brave for a second.

I followed them for a minute, trying to listen to their conversation to
see if any words stood out; but I followed them for just a minute
because they made me almost right away. I’m sure they saw my military
bearing as well, as if the Marine Corp T-shirt and sidearm weren’t hint
enough (LOL), I was hardly inconspicuous.

That’s when it
started getting hairy. Without breaking stride, one of them broke off
and circled around and started following me! Not wanting to get into a
gunfight with Russian Special Forces in the baked goods aisle of the
local Walmart I broke off myself and went out to the truck to grab my
camera. I came back inside looking for them, hoping to get a
photographic record, but I couldn’t find them.

The episode
containing this interview will be uploaded as soon as I record an
interview with a second source who has a story that is more on the
“inside” if you know what I mean.

Please continue to keep us
in your prayers folks; in fact, pray for our entire nation. Everything
that I’m hearing points to a dramatic change in our way of life before
the year is out. If we are to survive, we will most definitely need the
help and protection of Jesus Christ and His Father, Almighty God. If He
stands with us, who can stand against us.

I echo the sentiments
of my fellow patriot as I pray for the safety of him and his family:
They can take my blood, they can break my body; but they will never
break my spirit. If I am destined to give my life for the Truth in the
service of my Lord and Savior Jesus Christ then so be it. I can’t think
of a better way to die.