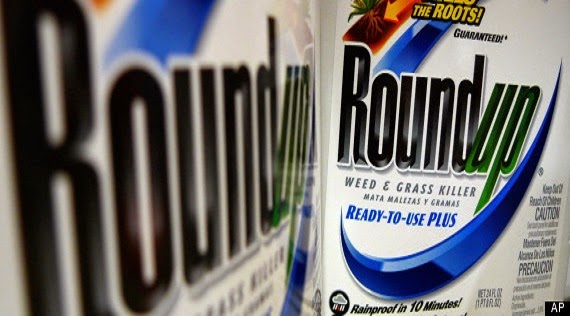 It’s been a bad couple of weeks for Monsanto. The company agreed to pay $600,000 in fines for not reporting hundreds of uncontrolled releases of toxic chemicals at its eastern Idaho phosphate plant. It also paid out a string of lawsuit settlements totaling $350,000 as a result of its GMOs tainting wheat in seven US states. Such amounts represent little more than a tap on the wrist for a company that rakes in sales of almost $16 billion dollars annually.
However, on 20 March the World Health Organisation reached a decision that strikes at the heart of the company. The WHO’s International Agency for Research on Cancer (IARC) said that glyphosate was “classified as probably carcinogenic to humans.” This is just one step below the risk designation of “known carcinogen.”
Glyphosate is the active ingredient in Monsanto’s Roundup herbicide, which was primarily responsible $5.1 billion of Monsanto’s revenues in 2014.  But that’s not all. The herbicide is used to support Monsanto’s Roundup Ready crops, which comprise the vast bulk of the balance of its revenue stream.
According to the US Department of Agriculture, herbicide-tolerant biotech plants were grown on virtually all (94%) soybean fields in the US last year and on 89% of all cornfields. Food & Water Watch found the volume of glyphosate applied to those crops increased almost 1,000% between 1996 and 2012, from 15 million pounds to 159 million pounds. The increase in usage has been accelerating in recent years.
Glyphosate has been detected in human bodies, food, water and in the air. Its use is strongly associated with various diseases (see this and this).
Aaron Blair, a scientist emeritus at the National Cancer Institute who chaired the 17-member working group of the IARC that classified glyphosate as “probably” cancer-causing, says that the classification is appropriate based on current science. Blair also states that there have been hundreds of studies on glyphosate with concerns about the chemical growing over time and added that the IARC group gave particular consideration to two major studies out of Sweden, one out of Canada and at least three in the US.
He stressed that the group did not classify glyphosate as definitely causing cancer:

By the end of last week, Monsanto’s shares had fallen by 2.9% on the back of the IARC’s decision.

Unsurprisingly, Monsanto has wasted no time in trying to rubbish the WHO findings. The work of cancer specialists from 11 countries was speedily dismissed by Monsanto. In a press release, the company argued the findings are based on ‘junk’ science and cherry picking and are agenda driven.
Philip Miller, Monsanto’s vice-president of global regulatory affairs, said:

Miller implies that regulatory agencies used objective reason supported by credible science when sanctioning glyphosate. Nothing could be further from the truth. The sanctioning and testing of glyphosate for commercial was seriously corrupted (for example, see this,this, this and this). Moreover, if Monsanto is going to accuse others of ‘junk’ science and ‘bias’, it has a serious credibility issue given that is has been a long-time leading exponent of  junk science and biased agendas.
For instance, Sustainable Pulse has discovered documents from 1991 that show how the US Environmental Protection Agency (EPA) was fully aware of glyphosate’s carcinogenic potential. In 1985, the carcinogenic potential of glyphosate was first considered by an EPA panel. This committee went on to classify glyphosate as a Class C Carcinogen with “suggestive evidence of carcinogenic potential.”
This Class C classification was changed by the EPA six years later to a Class E category which suggests “evidence of non-carcinogenicity for humans.” Sustainable Pulse concludes that the US government is to blame for allowing glyphosate onto the commercial market because it wanted to push it as part of as global campaign to support the US biotech industry in its attempt to dominate global agriculture. In other words, the health of the public was put before the need to protect company profits and foreign policy aims.
We can now expect to see a massive propaganda campaign by Monsanto to deny the science of the IARC and a huge amount of pressure placed on the WHO to retract the study. We can expect to see the usual cheerleaders proclaiming the faith and mouthing the tired cliches about glyphosate’s safety, regardless of mounting evidence that demonstrates its harmful health and environmental impacts.
But who needs science when the cherry-picked type mixed with a good old dose pro-biotech ideology will suffice? Time to wheel out Patrick Moore again… or maybe not!
According to Dave Schubert, head of the cellular neurobiology laboratory at the Salk Institute for Biological Studies in La Jolla, California:

“There are a number of independent, published manuscripts that clearly indicate that glyphosate … can promote cancer and tumor growth. It should be banned.”

Monsanto has for many decades been covering up its toxic practices and poisonous chemicals and has shown no regard at all for human life (read The Complete History of Monsanto). Banning the commercial use of glyphosate (and GMOs) would be a first but significant step on curbing the corrosive impact of a company that has over the decades caused so much misery and suffering.
However, as we cannot rely on governments or regulatory agencies to act in the public interest, ordinary people should act for themselves. See this by John Rappoport for advice on a practical strategy for activism directed at Monsanto.
Read why glyphosate should be banned