Christians have been persecuted since the Roman Emperor Nero fed them to the lions in the Coliseum. Continuing the tradition, Emperor Diocletian wrapped early Christian martyrs in oily rags and set them alight so he could enjoy his roses at night.

Persecution of Christians is back with a vengeance as the radical terrorists of al-Qaeda and the Muslim Brotherhood – supported by Terrorist-in-Chief Barack Hussein Obama – tear across the Middle East burning churches by the score, and religiously cleansing entire towns and villages.

In Syria, the entire Christian village of Maaloula has been cleansed of “infidels” with the brutality one might expect of religious fanatics whose “holy” book tells them to kill Christians and Jews wherever they might be found. 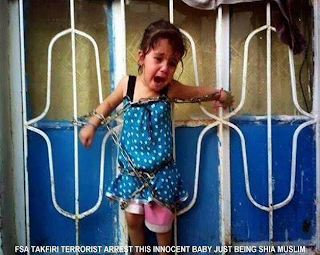 According to news stories and independent video coming out of Syria, Catholic priests have been beheaded {WARNING; NSFW}, nuns have been raped, and little girls have been tortured and have had their limbs cut off; other children have been forced to watch as their parents are beheaded because they refused to renounce their Faith in Jesus Christ, choosing instead to be martyred.

But you want to know what is really sweet? At the link just above this line, you will find my source for the opening segment in this show, the story of an increasingly rare victory for Christians. It seems that after Janet Napolitano labeled Christians (among just about everyone else in the country) as possible domestic terrorists, the Army followed suit with a series of briefings given to commanders and NCOs throughout the Army by decidedly anti-Christian “Academics.”

Fortunately for the Church, Secretary of the Army John McHugh “has ordered all training and instructions that label evangelicals as ‘extremists‘ or possible domestic terror threats be ended. In a memo distributed to troops on Oct. 18, 2013, McHugh addressed media reports that have highlighted US Army training material that is ‘inaccurate, objectionable and otherwise inconsistent’ with current Army policy.”

Score one for the good guys.

But as previously stated, attacks on Christianity are on the increase, even here in the United States. We are entering the time of Tribulation warned about in the Bible, where before Christ returns for His Bride Christians may very well pay the price for their Faith in our Lord and Savior Jesus Christ with their lives. There are reports of 30,000 guillotines already in storage at military bases around the country, ready to be used at a moment’s notice. And I saw thrones, and they that sat on them. And judgment was given to them, and to the souls of the ones having been beheaded because of the witness of Jesus, and because of the Word of God, and who had not worshipped the beast nor its image, and had not received the mark on their forehead and on their hand. ~ Rev. 20:4

Are you ready to give your life for our King? When the Devil’s minions are threatening the life of your child. demanding that you accept the Mark of the Beast, will you stand firm? Will you say, “Praise Jesus, Lord I’m comin’ home!” as the blade falls; or will you allow the threats of men and the fear of mortal death to intimidate you into accepting the Mark?

I wish I could count on the Rapture to spare the Church, my family and myself included, from the coming Tribulation; but the Bible says that we will suffer for Christ. We are not, however, “appointed to wrath,” so at least – according to the Pre-Wrath Rapture scenario towards which I’m leaning- we will be spared the Hell on Earth that awaits the damned.

Let’s just pray that our Father in Heaven will protect us from the schemes of the Devil, who is in the Earth right now seeking whom he may devour. I, for one, intend to give the bastard heartburn if he tries to take a bite out of me or mine. In any case, I know that he can do nothing to me or my family that Father won’t allow; His will, not mine, be done.

If that means I have to lose my head, or suffer watching a member of my family being tortured or killed, then so be it. Our mortal lives, a blink of the eye compared to Eternity, are nothing. Pain is momentary, fear can be overcome; remaining steadfast as we proclaim Christ King, no matter what the cost, is paramount.

God bless and keep you all,
Bobby