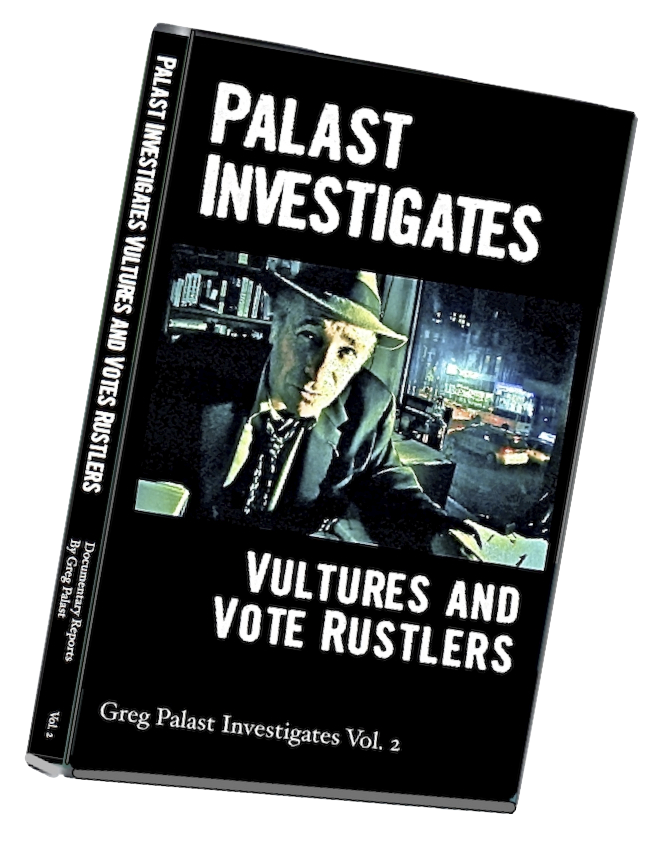 Know why the Guvna of Joyzee is so bloated? It ain’t the burgers: He’s pumped up with billionaire big bucks — from buck-a-roos who happen to be the stars of our new film:

Working with The Nation Institute, the Palast investigative team ripped the cover off this cabal of billionaires who secretly funding the GOP —— and their fave Christie —— through a series of corporate disguises. And who surreptitiously stuffed $115 million into Ann Romney’s “blind” trust.

Find out how this Billionaire Boys Club took down the US Treasury for $4 billion.

And that’s only ONE of the seven investigative reports on this smoking hot, new DVD, the updates of our special broadcasts for BBC Television, Free Speech TV, Democracy Now! and The Guardian.

So how do you get your hands on these killer reports?

We are finishing the edit this week.

Make a tax-deductible donation of $1,000 and we’ll list you as a Producer.

You have until November 28th to get your name on the film credits!

Or… Right now, pre-order Vultures and Vote Rustlers: Palast Investigates Vol. 2 —— for a minimum donation of $40, tax-deductible, and we will send you a copy of the DVD at its December release. I’ll sign it to you myself with my thanks.

Or get your signed 2-DVD combo Palast Investigates Vol. 1 & 2 for a tax-deductible donation of $65.

For more stuff visit the Palast Investigative Fund store or simply make a tax-deductible contribution to keep our work alive!

Check out the trailer. “Great fun” (New Yorker) with “Stories so relevant they threaten to alter history” (Chicago Tribune).

In 7 episodes,
…I take you along with my gonzo cameraman Rick Rowley (Dirty Wars, Fourth World War) up the Congo River to hunt for the man behind Christie’s money.
…to the Caspian Sea for the story of the Deepwater Horizon that you won’t see on the Petroleum Broadcast System.
…and to Ohio, the ballot-box Bermuda Triangle. Vote Theft 2016 is only a ballot burglary away. In Vultures and Vote Rustlers you’ll get the latest on the black-out of Black voters.

7 reports —— crazy, sickening, weirdly funny, eye-opening, more informative and more substantial than anything you’ll find on PBS, CBS or other big network BS.
Michael Moore praises our “Courageous reporting.” But, as Michael knows, it takes more than courage to make our films —— it takes funding. And the Kochs aren’t opening up their checkbook to us.

So we’re asking YOU to be OUR mogul.

Michael Moore calls our work, “Courageous reporting.” And indeed, one of Christie’s billionaires had his goons call BBC-TV to try to stop the broadcast of one of these reports.

But it takes more than courage to make our films —— it takes funding. And the Kochs aren’t opening up their checkbook to us.

As Noam Chomsky says, “Greg Palast upsets all the right people.” And so it’s not surprising that one of Christie’s billionaires had his goons call BBC-TV to try to stop the broadcast of these reports.  BBC wouldn’t back down.  Neither will we.

Help us upset a few more One Percenters. Please support our work with a tax-deductible donation.

Now is the moment to say you will support our continuing investigations —— and get the skinny on the fat cats.