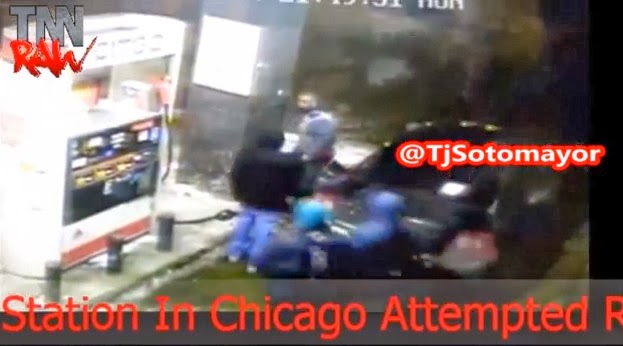 In the video below Tommy Sotomayor brings the story of an off-duty police officer, minding his own business while pumping gas when he is surrounded by three thugs, held at gun point and proves his assertion that they picked the wrong guy to attempt to rob.

Sotomayor’s commentary is golden as he states in his video and the article associated with the video “Not only is the young man dead but it would appear that the officer could have done the world a favor by taking out the other two!”

A gun pointed at his gut, the off-duty sheriff’s sergeant digs through his pockets with his left hand, fumbling for money, as the three robbers surround him at the Far South Side gas station.
The sergeant is surer with his right hand, quickly drawing his own gun and firing point-blank. The gunman, 16, drops at his feet as the two others scatter, according to surveillance video that captured the robbery Monday night at a Citgo station at 103rd Street and Cottage Grove Avenue, across the street from Gately Stadium.

Aside from the commentary, Sotomayor provides footage of the incident in the video shown below.

More over at his blog here.

Warning- Language Alert at the end of Sotomayor’s video below.