My wife DeLynn is going to die.
Barring a miracle, something which is being constantly prayed for and is entirely possible considering the boundless healing power of Almighty God, I have had to come to terms with that reality. While I might not be able to do anything to prevent the cancer that has ravaged her body from taking her life, I should at least be able to make her passing more comfortable; but we are being blocked at every turn by coverage limitations under Obamacare and, even more shockingly, social workers who delight — and profit — from denying benefits to eligible clients.
My wife and I are not the only victims of a social services system run by sadistic ideologues. According to a vendor for the Michigan Department of Human Services, the department is filled with cruel, uncaring, and despicable “social workers.” In an exclusive interview with The Truth Is Viral, this whistleblower says that she has personally held conversations with social workers who called their clients, “leeches, losers, and lowlifes.” She relayed the story of one woman in particular who was raising five children alone after her husband left upon learning that she had cancer. The woman’s worker told the whistleblower, “She should have thought about getting sick before she had all of those kids.”
The whistleblower described the sickening practice of rewarding workers who denied benefits to eligible clients — many times based solely on the fact that the client was white — and how those workers were rewarded. Every time an eligible client was denied a benefit for which they would normally be entitled, the worker gets a “brownie point.” According to the whistleblower, these brownie points can be turned in for pay raises and promotions.
One would think that people choose social work in order to help people who are in need. It is possible, and apparently altogether too common, for social workers to become so jaded that they begin to treat their clients with the disdain normally reserved for junkies or skid row bums stinking of Sterno; and even then, aren’t they human beings deserving of compassion too? When that disdain takes the form of criminal actions that not only adversely affect the lives of society’s most vulnerable, but define anew terms like “corruption,” “avarice,” and “sociopath,” it is incumbent upon society to put an end to those actions and punish those responsible.
I believe that my family is being punished by our social worker and her superiors. We can never get a phone call returned by our worker and her supervisor refuses to meet with us or even consider our request for a new worker despite repeated complaints. Whenever I go to talk to him he’s “In a meeting” or otherwise unavailable. My wife’s Medicaid has been turned off twice since she was diagnosed with cancer. Dealing with the disease is difficult enough without having to fight to keep her insurance for no good reason whatsoever. We are literally afraid to ask them for anything for fear of having new sanctions imposed instead of the help we require.

But the situation here at Casa Powell has reached the point where my wife needs skilled, in-home care; she needs hospice. She’s pretty much confined to bed, as her bed sores will attest, depending on me to steady her and provide what measures I can to make her comfortable. I’m “on-call,” literally 24 hours a day, unable to even leave the house to shop for groceries unless there is another adult available to stay with her.

So last week we called NEMSCA, the Northeast Michigan Community Service Agency which works with Social Services to arrange such things, only to receive a letter informing us that my wife could not be evaluated because their in-home nursing program was “at capacity.” In other words, they don’t have any money. So much for Obamacare “protecting the most vulnerable in our society.”
Does anyone else find it disturbing that the government can find money to supply weapons to terrorist groups in Syria (ISIS thanks you Mssr. Obama & McCain,) and send illegal aliens to school instead of sending them back to the country from which they came, that Bradley Manning can transmogrify himself into a “woman” (boy, will that ever make him popular in Leavenworth,) and aged transsexuals can use Medicare to pay for their gender reassignment surgeries when they turn 65; but a dying woman can’t get skilled end-of-life care? Possibly because she is white?
The very thought makes me want to vomit.
If you would like to do something to change this, share this video on every social media site to which you belong. Post it on Twitter, sending it specifically to the FOX News personalities listed below. If anyone expects MSNBC to touch this story they’re nuts. Post it on Facebook, remembering to post it in all of the groups to which you belong in addition to your timeline. Click the share button under the video on Youtube and it opens up to reveal ten different sites where you can share the video with a couple of mouse clicks. Then send it to all of your email contacts and ask them to do the same. Send up smoke signals if you have to.
Maybe someone who can help us will see this and give a damn.
DeLynn and I want to thank everyone who has been praying for us as we have waged this battle against this most insidious disease. Your kind comments, lengthy written prayers, and moral support have strengthened us more than can be described. We’d ask however, that you not give up yet. We haven’t. Continual prayer may yet have the desired effect and save her life.
I can’t imagine a greater miracle than a cure for her cancer and diabetic neuropathy, and if one is forthcoming I swear now before the entire world that I will be ceaseless in my efforts to proclaim the healing power of Christ to all who would listen. If granting that miracle is not Father’s will, then we will need your prayers to strengthen us for our walk through the Valley of the Shadow of Death.
In any case, please pray. At this point, for anything that matters, Jesus Christ is our only hope.
God bless you all, and Semper Fi,
Bobby and DeLynn
Please Tweet this episode to:
@BretBaier
@megynkelly
@GretchenCarlson
@kimguilfoyle
@ericbolling
@RobertGBeckel
@greggutfeld
@TheFive
@gretawire
@AndreaTantaros
@seanhannity
@RedEyeFNC
@FoxNews
@ShepNewsTeam
@peterjohnsonjr
@Judgenap
@pdoocy
@kilmeade
@ehasselbeck
@GeraldoRivera 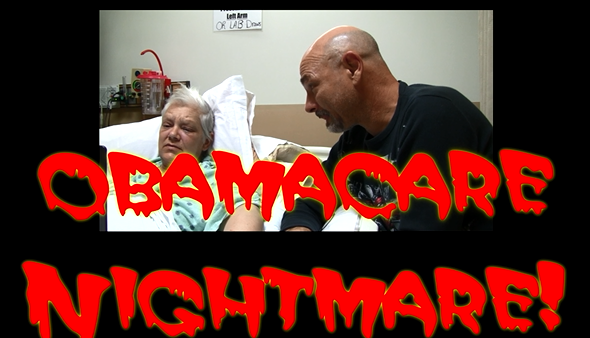