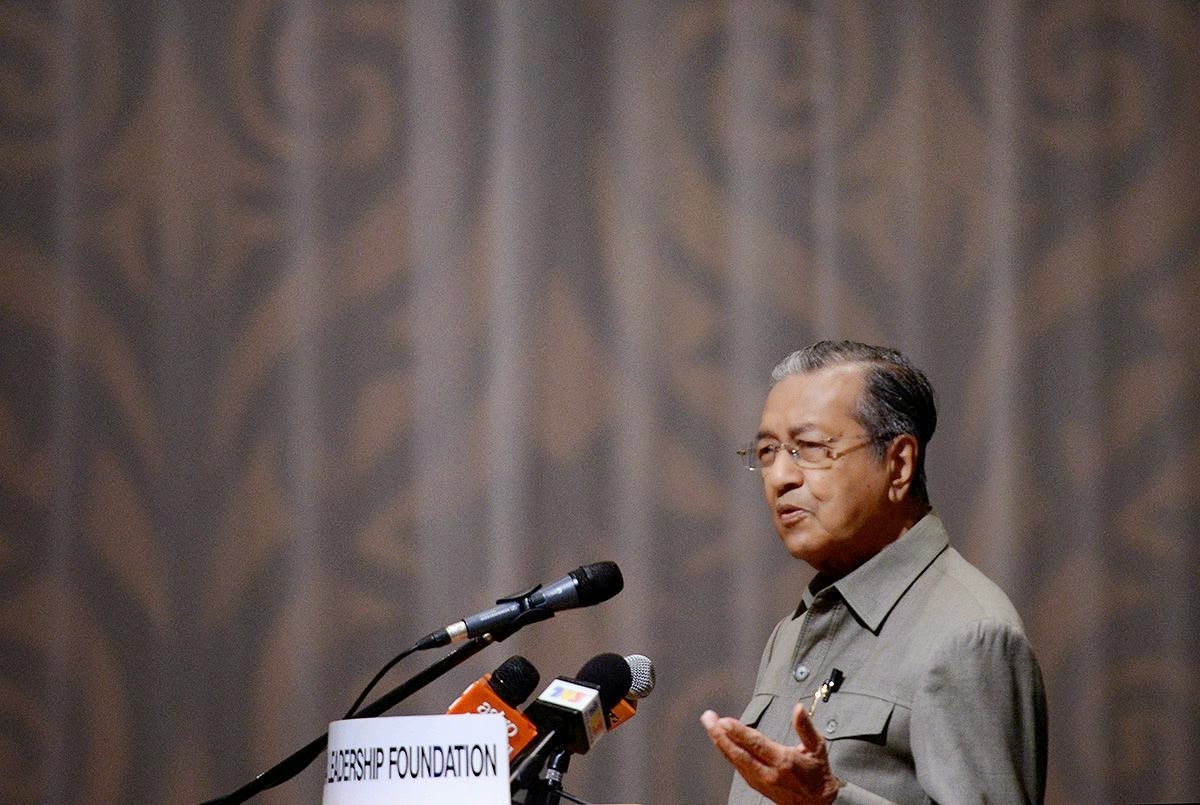 As developed economies of the world still continue their struggle to recover from the global financial crisis in 2008, the lack of confidence in global economic stability has placed greater demand on emerging markets to cushion themselves for the next crash. While woefully unsustainable debt levels deepen and weak regulatory oversight persist, the lack of tangible reforms creates an imperative for countries like Malaysia to stay ahead of the curve.This was the theme of the Perdana Leadership Foundation’s sixth CEO Forum held in Kuala Lumpur last week, where more than thirty panelists analyzed the shaky state of the global economy and offered insights into Malaysia’s strengths and vulnerabilities, as well as the country’s susceptibility to external economic turbulence. In addition to market-related vulnerabilities, panelists also identified inter-religious anxieties between communities as factors that could put national unity and political stability at risk. Tan Sri Dato’ Dr. Lin See Yan, a trustee of the Tan Sri Jeffrey Cheah Foundation, identified how high fences built to withstand economic shocks and de-risk the financial system are seldom designed for all possibilities. He branded the European Union as the weakest link in the global financial system, noting that the bloc’s debt problems kept growing, austerity has proven to be counter productive, the euro currency remains overvalued, and the European Central Bank (ECB) has stagnated in the midst of its bond-buying strategy.Lin also noted the possibility of another crisis originating from within the United States due to vulnerabilities posed by the country’s ballooning $17 trillion debt levels, the growing housing bubble, and the persistence of trading high-risk financial products backed by complex securitizations. He also raised concerns over recent data on the Chinese economy, which has shown a decline in fixed asset investments, raising speculation about whether or not the Chinese authorities would introduce a stimulus package. Tan Sri Azman Yahya, executive chairman of Symphony Life, believes that growth in China will continue to be on the upswing despite concerns of deceleration, even without significant investment, by virtue of Beijing’s prudent economic reforms. China has already announced at the recent G20 meeting of finance ministers that it will not make major policy adjustments in the form of stimulus despite slightly lower growth indicators. Reforms will be prioritized to stabilize employment and contain systemic risks such as widespread default. High government deficits, unprecedented government and private sector debt levels, and low household savings are deeply worrying trends in mature economies, according to Yahya, who claims that eventual tapering by the US Federal Reserve to cease quantitative easing (QE) measures could trigger a loss of confidence in the US dollar, causing an offloading and crash of US securities capable of tanking global markets. Yahya identified the risks posed by the lack of tangible financial sector reforms, the unsustainable US debt bubble, the growing loss of confidence in the US dollar, and surmised that the next crisis may strike within five years. He identified the high growth levels of Asia-Pacific countries as a buffer to crises emanating from stagnate western economies, noting how China’s middle class is set to expand to one billion by 2025, while growth will be increasingly be powered by consumption. Panelists at the forum generally agreed that the Asia-Pacific region is in a far healthier state today in comparison to the 1997 crisis, as China’s growth strategy moves away from the investment-driven template to more sustainable consumption-led expansion. Countries in the ASEAN region are also cooperating at higher levels. Analysts agree that Malaysia has proven to be fairly resilient and adept at crisis management, as it managed to navigate through treacherous economic periods while retaining consistently healthy growth levels over the past two decades. The country defied the IMF’s economic orthodoxy and introduced capital control measures during the 1997 Asian financial crisis to counter the short selling of the Malaysian ringgit by currency speculators, which triggered dramatic depreciation and rapid falls in stock market capitalization. Malaysia recovered faster than its neighbors and consolidated its banking system, putting buffers in place by introducing broader market regulations and strengthening banks to withstand shocks.

During the global financial crisis in 2008, triggered by the bursting of the US housing bubble and the subsequent collapse of large financial institutions trading toxic mortgage-related financial products, the country found itself better prepared. The way the crisis struck in 1997 took Malaysian policymakers totally off guard. The country’s economy was highly stable and experiencing growth at 8 percent; loans were being repeatedly prepaid and Malaysia was stepping in rescue Thailand after attacks on the baht.

The current scenario also demands that countries expect the unexpected. The general consensus among panelists the Perdana forum was that a new financial crisis could present itself at some point within the next eighteen months to five years, with the potential for several mini-crises to bubble up and trigger recessionary depression. It is nearly impossible to accurately pinpoint when the next crisis will hit, but there are numerous flashpoints to consider.

In addition to vulnerabilities stemming from uncontrolled derivative trading and speculative hot money flows, debt and bubbles loom. During the 2008 crisis, insolvent private banks and lending institutions were deemed too-big-to-fail, but today, central banks are on the road to inheriting that status. Debt levels have ballooned to unprecedented levels driven by QE and low interest rates. Stagnate wages and easy credit has goaded consumers to keep borrowing to maintain consumption.

Both the United States and the United Kingdom are experiencing high unemployment levels and dramatic income inequality, giving rise to greater levels of social unrest while the stock markets of both countries have performed above par — surpassing the highs of pre-crisis levels. The sharp ascent of share prices, which has been heralded as proof of an economic recovery, does not correlate with rising activity in the productive economy or with per capita income.

The distinguished economist Ha-Joon Chang has referred to these developments as ‘the biggest stock market bubble in modern history.’ It is clear that share prices do not reflect real economic activity. The core of the problem is that successive rounds of QE have increased liquidity rates and fuelled asset bubbles rather than being channeled into productive assets.

Panelists addressed how many of the new jobs being created in mature economies are low-wage positions that offer little career mobility. The broad appeal of protest campaigns organized by fast-food workers to demand a living wage is a testament to the strains on ordinary people who are unable to meet the cost of living. Americans are pessimistic about their nation’s economic recovery policies because many find themselves facing more trying domestic circumstances.

Tun Dr. Mahathir Mohamad attended the Perdana forum to give the closing keynote address, where he likened the implementation of solutions to avert economic crises to a medical doctor treating a patient, stressing the need to understand the systemic contradictions of the global financial system. Dr. Mahathir denounced fractional reserve banking practices, which result in banks lending far greater amounts of money than they actually possess in cash reserves, and the leveraging practices taken advantage of by currency speculators and hedge funds.

The former Malaysian prime minister accused Europe and the US of being in a state of denial as to how markets are manipulated, primarily because the political classes themselves benefit from speculation. Dr. Mahathir believes that the role of the financial sector is overemphasized in national economies and advised greater market regulation. Governments must be ready to step in to limit the abuses of the banking system, according to Mahathir, who characterized the inherent inequality of the modern age as one where 99 percent of people are beholden to the ultra-wealthy 1 percent, citing the slogan popularized by the Occupy Wall Street protest movement.

Mass protest movements demanding accountability from Wall Street have remained potent because the underlying conditions that generated the crisis have not been addressed in any meaningful way. Instead of steering monetary policies in a sensible direction and broadening regulatory oversight to identify risky financial products and prevent predatory speculation, the banking lobby has strong-armed western politicians into accepting a growth model where short-term profits for the few take precedence over long-term investments in productive assets for the many.

Elsewhere in the world, the economic power and political autonomy of BRICS countries and their plans to establish a development bank to finance infrastructure growth throughout the developing world offers a far more sustainable investment model. To offset the risks of future crises, it is imperative to find the political courage to reduce the importance of the non-productive financial sector in national economies in favor of investments into productive assets that create infrastructure and job opportunities.

Panelists at the Perdana forum argued that even if measures are taken to bolster productive assets, financial and economic crises may strike in unexpected ways: resulting from cyber threat vulnerabilities, sudden geopolitical instability, conflicts over resources and the pricing of resources, and complications that can result from the use of non-traditional currencies.

Malaysia is considered a safe investment destination due to its political stability and imperviousness to natural disasters; the country’s competent young workforce is eager to enter innovative service sector positions, a major asset in contrast to other Asian countries struggling to maintain population growth. To meet the present development aspirations, it is necessary for the country to protect against both external and internal crises.

The Malaysian leadership faces a difficult balancing act on all fronts. It must do more to improve inter-communal harmony without rolling back civil liberties. Despite the country’s strong performance legitimacy, trust and confidence in the government and the integrity of institutions remains low due to endemic corruption. There is a need for a comprehensive social safety net system to address rising income inequality on a needs-basis.

Simultaneously, economic circumstances demand that developing countries remove energy and social subsidies in order to increase efficiency and become a more attractive destination for capital. Navigating through the crises ahead will require bold leadership. Malaysia will be in a better position to withstand turbulence if it takes meaningful steps to reduce income disparities and pursues inclusive social policies that will restore grassroots trust in the leadership.

This article appeared in the September 29, 2014 print edition of The Malaysian Reserve newspaper.

Nile Bowie is an independent journalist and political analyst based in Kuala Lumpur, Malaysia. His articles have appeared in numerous international publications, including regular columns with Russia Today (RT) and newspapers such as the Global Times, the Malaysian Reserve and the New Straits Times. He is a research assistant with the International Movement for a Just World (JUST), a Malaysian NGO promoting social justice and anti-hegemony politics. He can be reached at nilebowie@gmail.com.