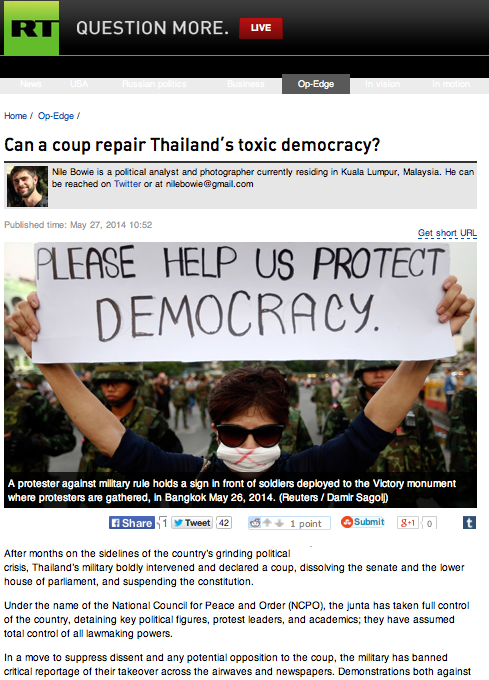 After months on the sidelines of the country’s grinding political crisis, Thailand’s military boldly intervened and declared a coup, dissolving the senate and the lower house of parliament, and suspending the constitution.

Under the name of the National Council for Peace and Order (NCPO), the junta has taken full control of the country, detaining key political figures, protest leaders, and academics; they have assumed total control of all lawmaking powers.

In a move to suppress dissent and any potential opposition to the coup, the military has banned critical reportage of their takeover across the airwaves and newspapers. Demonstrations both against and in support of the coup have sprung up around Bangkok, while the military has issued an ultimatum threatening protestors with lengthy jail sentences if they continue rallying.

Thailand’s ailing monarch, King Bhumibol Adulyadej, has endorsed the military takeover, formalizing coup leader General Prayuth Chan-ocha as the head of government. The military takeover came in response to over six months of protests and counter-protests between the country’s rival political factions, which prompted outbreaks of violence and seizures of public buildings.

General Prayuth justified the coup by highlighting the need to prevent factional infighting and violence on a wide scale, urging the restoration of order as the country teeters on the brink of recession, after prolonged political frictions battered the economy. The junta will now establish an interim constitution, legislative and reform committees. Thailand’s political crisis is complex, and the issue of royal succession is a fundamental dynamic to the multidimensional power struggle unfolding.