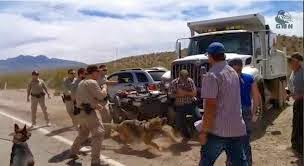 It is a good thing the militias showing up in Nevada to support Cliven Bundy and his family are armed because it looks like this might become a bloody battle, another Waco or Ruby Ridge after all, if the words of Clark County Commissioner Tom Collins ( Phone # – 702-455-3500 or Collin’s personal assistant at 702 – 455-354) are any indication of as he tells Utah residents that are heading to Nevada to support the embattled, terrorized Bundy family, that they “better have funeral plans!”

The comments were revealed by Darin Bushman, a Piute County, Utah, commissioner after he spoke with Collins about Utah ranchers and his colleagues on the County Commission complaining about tactics used by Bureau of Land Management agents during their seizure of Bundy’s cattle in southern Nevada.

“I was just told by commissioner Collins of Clark County NV that all of us folks from Utah are a bunch of “inbred bastards” and if we are coming to Clark Cointy NV to support Cliven Bundy we all “better have funeral plans”. We should “turn our asses around on mind our own f-ing business”. Now there’s some classy leadership for you,” wrote Bushman on his official Facebook page.

The Bundy family has said time and again they do not want violence, they only want their preemptive land rights (their family has been using the disputed land since before the existence of the government terrorists that are assaulting family and supporters and stealing his cattle and destroying 100 year old water tanks) and their foraging rights, acknowledged and respected.

The Bundy family has been fighting this battle against the Bureau of Land Management for over 20 years and it is now coming to a head as the BLM and federal agencies declare areas for the “First Amendment,” set up sniper kill boxes, use K-9 dogs and taser Bundy supporters.

It looks like Mr. Bundy is now a symbol of states’ rights, land owners’ rights against the federal government’s overeach and terrorism against them.

FLOOD THEIR PHONES, EMAILS, FAXES AND IF CLOSE ENOUGH, GO TO THEIR OFFICES IN PERSON AND HAVE A LITTLE CHAT WITH THESE PEOPLE.