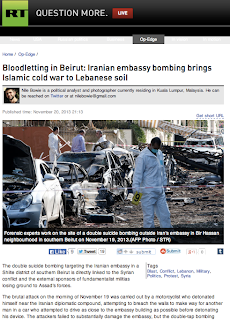 The double suicide bombing targeting the Iranian embassy in a Shiite district of southern Beirut is directly linked to the Syrian conflict and the external sponsors of fundamentalist militias losing ground to Assad’s forces.

The brutal attack on the morning of November 19 was carried out by a motorcyclist who detonated himself near the Iranian diplomatic compound, attempting to breach the walls to make way for another man in a car who attempted to drive as close to the embassy building as possible before detonating his device. The attackers failed to substantially damage the embassy, but the double-tap bombing took the lives of two dozen bystanders and first responders, while injuring over a hundred more.

These tactics directly reflect the methods used by Al-Qaeda against Shiite communities throughout Iraq in the worsening terror campaign raging between Sunnis and Shiites. For the first time, Iranian diplomats were targeted on Lebanese soil, and the attack undoubtedly represents deteriorating relations between Shiite Iran and Sunni Saudi Arabia, the latter serving as the principle financier and arms supplier of the hardline Salafist militias fighting to topple the Syrian government, but losing.

The use of Iraqi-style terror tactics on Lebanese soil could be interpreted by some as a spillover from worsening fighting and lawlessness in Syria, but it is more accurately a measure taken by Salafist fighters in response to strategic victories by Assad’s forces, who have the upper hand and are quickly reconsolidating power.