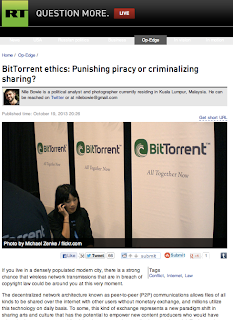 If you live in a densely populated modern city, there is a strong chance that wireless network transmissions that are in breach of copyright law could be around you at this very moment.

The decentralized network architecture known as peer-to-peer (P2P) communications allows files of all kinds to be shared over the internet with other users without monetary exchange, and millions utilize this technology on daily basis. To some, this kind of exchange represents a new paradigm shift in sharing arts and culture that has the potential to empower new content producers who would have otherwise been consumers, while giving rise to a new decentralized economic model. To those who have a stake in maintaining the pre-eminence of copyright laws over the means of distribution, the millions who utilize these new habits of consumption are likened to renegade sea-bandits in arms — pirates — and they need to be stopped.

Most file-sharing is utilized through BitTorrent, and involves a host website that supports an index of .torrent files that can be downloaded in separate client applications. The content itself is not stored on a single centralized hard drive, but rests on the individual hard drives of millions of users who share their files through a P2P network, making file-sharing very difficult to regulate. The kinds of files that are shared range from films and music to software and e-books. All of it is done without monetary exchange, just as one would share the same kind of content with a friend. Much like the printing press, cassette recorders, VCRs, cable television, mp3 players and the like, the film studios of Hollywood and the recording industry view such innovations as an existential threat to their industries – and file-sharing has become the present day object of a witch-hunt led by the Motion Picture Association of America (MPAA) and its counterpart, the Recording Industry Association of America (RIAA).