On October 25, 2013 – A 7.3 Magnitude earthquake hits Japan. Tsunami warnings have been issued, causing concern about the crippled Fukushima nuclear plant already devastated by the 2011 earthquake and tsunami.

Workers at the Fukushima power station had been told to leave waterfront areas for higher ground.

But a Fukushima spokesman later said there was no damage or change in readings at radiation monitoring posts around the plant, according to Reuters news agency.

The Japan Meteorological Agency had warned that a small tsunami – up to one metre (3.3ft) – could reach the eastern coast after the tremor in the Pacific Ocean.

The agency had also issued a “yellow” advisory for Fukushima and the prefectures of Iwate, Miyagi, Ibaraki and parts of Chiba.

But it added: “Though there may be slight sea-level change in coastal regions, no tsunami damage is expected.” 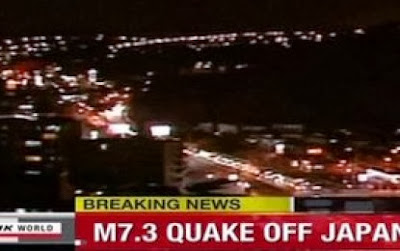