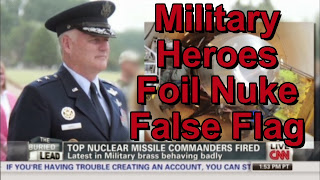 On this episode of The Truth Is Viral, Nobel Peace Prize nominee and former CIA spy Dr. Jim Garrow explains how the actions of these men – an Army General, an Air Force General, and a Navy Admiral – who were in charge of safeguarding the nation’s nuclear stockpile, saved the lives of 300 million Americans from the devastating effects of a planned EMP attack on the United States: A “false flag” EMP attack perpetrated by the Obama administration using our own nuclear weapons.

As reported by Anthony Gucciardi and Infowars, a secret transfer of nuclear weapons from Dyess Air Force Base was ordered by the Obama administration; but according to Dr. Garrow this transfer broke every established protocol concerning the storage and movement of weapons in the nation’s nuclear stockpile and the officers in charge refused to carry them out.

According to seismographic records, on October 8th a magnitude 4.5 earthquake occurred off the coast of South Carolina, giving credence to Dr. Garrow’s claim that one of the weapons was actually detonated at sea to keep it out of the hands of traitors who would destroy the United States; the others, according to Dr. Garrow, are still missing.

Two of the officers have been identified in published reports as Air Force Maj. Gen. Michael Carey and Naval Vice-Admiral Tim Giardana. Both men were in charge of several hundred nuclear missiles each, and according to those reports were fired for alleged drinking and gambling, respectively. The Army general, possible the individual who has possession of the remaining nuclear weapons, has not yet been identified in the press, and Dr. Garrow refused to name him during this interview.