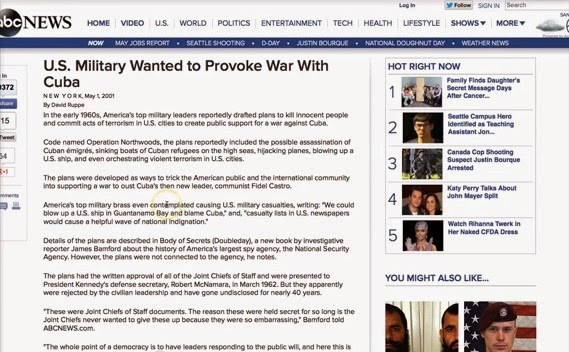 On May 15, 2014, Newsweek published a piece about conspiracy theories and how they “cripple basic governance,” also that they “divert attention from real issues,” and “distort the debate that is crucial to democracy.”

First and foremost, as much as some would like it to be different, America is NOT a Democracy, it is a Republic that holds democratic elections, but despite the MSM’s attempts to distort that very basic fact, that is not the point of this article.

Key Quotes from the Newsweek article:

…..“One of the most common ways of introducing a conspiracy theory is to ‘just ask questions’ about an official account,’’ says Karen Douglas, co-editor of the British Journal of Social Psychology and a senior academic who has researched conspiracy theories at Britain’s University of Kent. “It’s quite a powerful rhetorical tool because it doesn’t require any content, just the introduction of doubt about the official story.”….

But accusing political opponents of serious wrongdoing based on unsubstantiated nonsense plays havoc with social discourse. When each side attacks the other based on wild theories–calling them terrorists, anti-American, murderers, racists and the like–the tribal divisions cripple basic governance.

“The reason we should worry about conspiracy theories and misinformation is that they distort the debate that is crucial to democracy,’’ says Brendan Nyhan, an assistant professor in Dartmouth’s government department who has conducted research on conspiracy theories. “They divert attention from the real issue and issues of concern that public officials should be debating.”

It is a long article, make sure to read it before listening to the video below, where Mark Dice discusses 18 “crazy” conspiracy theories…………. all that were proven true over time, from either declassification of government secrets (years after the fact and AFTER insisting that those that believed those theories were crazy) or leaked information proving them true, again, usually years later.


The point is the MSM is doing everything they can to label those that “ask questions” about an “official” story as loons that are disrupting the process, yet no mention in this hit piece about conspiracy theories that are true, those “loons” were right, the official story nothing but a pack of lies.

Sure there are some theories that are over-the-top and out there, so to speak, but when “we the people” have been lied to over and over again by the very government we elected to represent us, then every single official story becomes suspect……. and they should be!