This is the tenth chapter of a series excerpted from “Maverick Chronicles,” a memoir-in-progress. Previous stories can be found at VTDigger.

Before Burlington’s progressive revolution in 1981, the Vermont Vanguard Press was the Champlain Valley’s strongest voice for change to emerge in years, hosting a hungry crew of young journalists, activists and thinkers who frequently shook up the status quo. Although an alternative newspaper certainly didn’t qualify as a political movement, the dividing line was less than obvious.

Editorial board meetings often became encounter groups where ideology clashed with the desire for respectability and the need for advertisers. It was certainly a voice of opposition, bringing problems like Burlington’s housing crisis, homelessness, environmental threats, the nuclear arms race, the perils of urban growth and the decaying dynasty inside city hall into the mainstream of public consciousness.

Mayor Gordon Paquette recognized the threat, and, after the newspaper published an article criticizing his decision to ban rock music in local venues, he decided to counter-attack. Paquette sued the paper and its editors for libel. The case centered on the allegation that he was drunk on the night when he attended a Supertramp concert in Memorial Auditorium and found some concertgoers too rowdy for his taste.

After we published the story, Paquette tried to force a retraction and get the names of our anonymous sources. When we refused he sued, which led to even more bad press. Convinced that the paper — and its senior editor specifically — was out to get him, the goal was to make the price so high that the Vanguard would be forced to back off. But we didn’t, and in early 1981, on the verge of a remarkable mayoral election, discovery and depositions were pending.

Shortly after that vote* the case was quietly dropped.

Concerned about the power and danger of covert operations and perception management, I had turned my focus to the intelligence community and threats to civil liberties, publishing investigative pieces and speaking at conferences and protests. After the post-Watergate revelations of the mid-1970s Congress moved briefly toward defining a set of standards. By the time the Foreign Intelligence Surveillance Act (FISA) was passed in 1978, however, the mood was already shifting back toward broadening the powers of the FBI and CIA.

Fearing that Supreme Court decisions would be even more damaging to individual rights than congressional actions many civil libertarians supported FISA, which set up a “secret court” to handle wiretap warrants. Emboldened by this legislative victory, the FBI and CIA next sought to legitimize the type of covert activities that had provoked protest only a few years before.

Most of Congress was already eager to liberate the intelligence agencies, which claimed that their covert programs had been hamstrung by Watergate era rules and congressional oversight. Thus, politicians looked away when the CIA or FBI didn’t completely notify Congress about their operations. A chance to blow the whistle finally emerged in early 1980, just days before the launch of the US Census.

Sometimes it takes only a single document — and good timing — to shake things up. In this case it was an FBI report about the surveillance of a nurse practitioner named Jed Lowy. Like many people, Lowy just happened to be in the “wrong place” at the wrong time. In his case, the place was a so-called Vermont “commune” the bureau considered a gathering spot for “extremists.” The difference was that Lowy obtained his FBI file via the Freedom of Information Act and shared it.

One entry in the file revealed that the bureau was trying to identify the driver of a Blue 1970 Volkswagen, which had “previously been observed at New Left locations in Vermont.” The Albany FBI office contacted its Newark, New Jersey counterpart and discovered that the car belonged to a 53-year-old man, Lowy’s father. A search was initiated to see who might be driving it. 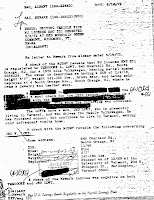 The article I wrote for the Vanguard, published on April 4, 1980, charged the bureau with misusing the US Census. The evidence was a document that said the following: “A (deleted) to (deleted) the (deleted) of a spot check for the 1970 census resulted in a (deleted) with the (deleted) from whom the following was obtained.”

Not much to go on. But in a letter to Lowy the Bureau explained that the deleted portions referred to other people whose privacy rights were being protected and the investigative techniques that had been used. Once they had Lowy’s name, they had zeroed in on him through the New Jersey Department of Motor Vehicles and continued investigating for another six months. Despite the absence of any evidence they kept at it because of an alleged association with the Fresh Ground Coffee House, “a known contact point for extremist(sic) and associated with the Red Mountain Green Commune.”

When I contacted the FBI, an agent in Washington, DC office issued the standard denial: “The FBI does not utilize census information. Period.” Once I read portions of the memo, however, he decided to get back to me. In a follow up call, the new line was that he wasn’t “at liberty to discuss documents that the FBI has.” He didn’t repeat the denial. We had struck a nerve.

The story created an immediate sensation, shooting across the country within hours. Vermont’s congressional delegation said the repercussions could be serious and promised to investigate. By the weekend, our scoop was a national sensation and Lowy was being interviewed on the CBS Evening News. A week after the initial story, the FBI acknowledged that, although census information hadn’t been used, an agent had indeed posed as a census worker.

The technique, a bureau spokesman told the New York Times, was known as “pretext interviews,” in which agents assume false identities. But he added that new FBI guidelines said agents shouldn’t pose as representatives of other Federal agencies without the consent of that agency. That, of course, raised the question of what the Census Bureau actually knew. Unfortunately, the investigation never got that far.

Instead, the FBI released a less deleted version of the memo. What it revealed was that a “pretext call” — the first deleted phrase — to the Lowy home had “resulted in a conversation with the maid…” In other words, an FBI agent had posed as a census worker to find out more about a 30-year-old health worker who had merely visited a “commune.” FBI Director William Webster protested that the technique was legal — but added that all field offices had been told not to do it.

Attorney General Ben Civiletti was a more candid. In a letter to US Senator Patrick Leahy, he said the FBI knew “it is wrong for an FBI agent to pose as a representative of the Bureau of the Census for any reason,” and had so informed its special agents. Webster subsequently put the revised policy on paper: the pretext of being a census worker shouldn’t be used, or even requested.

What we never learned was whether it was an isolated occurrence or a standard procedure. Nevertheless, a small crack had been made in the covert iceberg. An alternative newspaper had broken through the “Washington consensus” to challenge the intelligence community. It wouldn’t be the last time.