She was given five minutes to change her mind and when she refused, she was suspended on the spot.[1]

“Most of the workers at Dunnes in Henry Street went on strike that day, and eight of them joined Mary Manning and Karen Gearon thereafter. They would stay on strike for the next two and a half years, surviving on strike pay of £21 a week, returning to work only after the Irish government prohibited the sale of South African fruit and vegetables in Irish stores.”[2]

This selfless action by Irish workers in 1984 led to extraordinary events as support for their actions grew despite fierce racist reaction by some individuals. Karen Gearon and Mary Manning were invited to meet Desmond Tutu in London and Gearon testified in front of the United Nations Special Committee Against Apartheid. Then things really hotted up when the girls were invited by Tutu to visit South Africa.

““Myself and eight of the strikers flew to South Africa and weren’t allowed in,” says Brendan Archbold, the IDATU official in charge of the strike. “We were held at the airport and weren’t allowed contact our families for over 24 hours.” They were put on the next plane back home. The furore over their disappearance captured the public imagination. “It definitely changed the tide,” says Gearon.”[3] 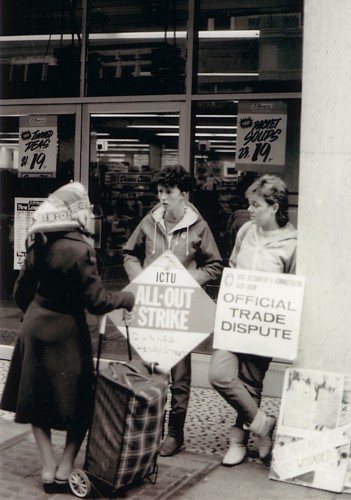 At the time, myself and many others would join the strike on Saturdays, the busiest day of the week for Dunne’s Stores. I was in my last year in art college and decided to base one of my final show prints on the strike. 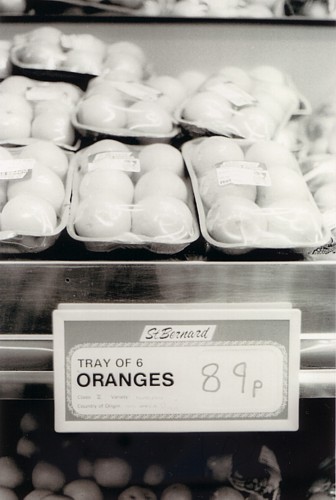 While taking photos of the offending oranges and grapefruit I was stopped by the management who threatened to take my film on the basis that I was ‘stealing their display designs’. The finished print can be seen below. 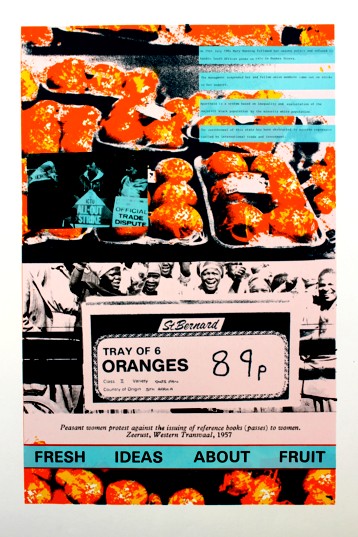 The strike would last nearly 3 years before the Irish government banned South African goods from being sold in Ireland.

Their story entered the popular imagination as the Dunnes Stores strikers had songs written about them by Christy Moore (‘Dunnes Stores'[4]) and Ewan MacColl (‘Ten Young Women and One Young Man’).

Several months after being freed from prison in February 1990, Nelson Mandela met with some of the strikers when he visited Dublin and told them that their stand helped keep him going during his imprisonment. 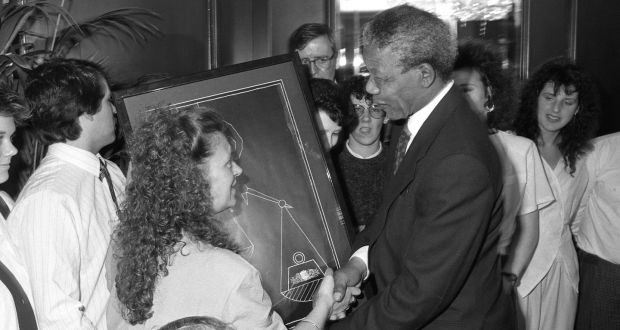 Cathryn O’Reilly, from Finglas, one of the Dunnes Stores strikers, presenting Nelson Mandela with a Robert Ballagh print calling for the release of the Birmingham Six in 1990. Photograph: Frank Miller

In 2008 the workers strike action was commemorated with an official plaque in central Dublin.

The eleven Dunnes Stores workers from Henry Street were:

Caoimhghin Ã“ CroidheÃ¡in (@cocroidheain) is a prominent Irish artist who has exhibited widely around Ireland. His work consists of paintings based on cityscapes of Dublin, Irish history and geopolitical themes (http://gaelart.net/). His blog of critical writing based on cinema, art and politics along with research on a database of Realist and Social Realist art from around the world can be viewed country by country at http://gaelart.blogspot.ie/.