Thomas Edison said, “Dissent is the highest form of patriotism.”  And because I love my country, I frequently criticize America’s shortcomings in the hopes of making her better.

But the truth is that the United States is not unusual … it is just like all other empires which have hit their peak and then quickly crashed.

Political insider and veteran reporter Kevin Phillips has documented that every major empire over the past several hundred years has undergone a predictable cycle of collapse, usually within 10 to 20 years of its peak power.

The indications are always the same:

– The financialization of the economy, moving from manufacturing to speculation;

In 2000, America was described as the sole remaining superpower — or even the world’s “hyperpower”. Now we’re in real trouble (at the very least, you have to admit that we’re losing power and wealth in comparison with China).

How did it happen so fast?

Diamond’s book’s, Collapse: How Societies Choose to Fail or Succeed, studies the collapse of civilizations throughout history, and finds:

Civilizations share a sharp curve of decline. Indeed, a society’s demise may begin only a decade or two after it reaches its peak population, wealth and power…

One of the choices has depended on the courage to practice long-term thinking, and to make bold, courageous, anticipatory decisions at a time when problems have become perceptible but before they reach crisis proportions

How [am I] so sure about this final collapse?

Of all the questions I have about the future, this is the easiest one to answer. Once a society becomes successful it becomes arrogant, righteous, overconfident, corrupt, and decadent … overspends … costly wars … wealth inequity and social tensions increase; and society enters a secular decline.

[Quoting 18th century Scottish historian Alexander Fraser Tytler:] The average life span of the world’s greatest civilizations has been 200 years progressing from “bondage to spiritual faith … to great courage … to liberty … to abundance … to selfishness … to complacency … to apathy … to dependence and … back into bondage”

[Where is America in the cycle?] It is most unlikely that Western societies, and especially the U.S., will be an exception to this typical “society cycle.” … The U.S. is somewhere between the phase where it moves “from complacency to apathy” and “from apathy to dependence.”

In other words, America’s rapid fall is not really that novel after all.

How Consumers, Politicians and Wall Street All Contributed to the Fall

On the individual level, people became “fat and happy”, the abundance led to selfishness (“greed is good”), and then complacency, and then apathy.

Indeed, if you think back about tv and radio ads over the last couple of decades, you can trace the tone of voice of the characters from Gordon Gecko-like, to complacent, to apathetic and know-nothing.

On the political level, there was no courage in the White House or Congress “to practice long-term thinking, and to make bold, courageous, anticipatory decisions”. Of course, the bucket-loads of donations from Wall Street didn’t hurt, but there was also a religion of deregulation promoted by Greenspan, Rubin, Gensler and others which preached that the economy was self-stabilizing and self-sustaining. This type of false ideology only can spread during times of abundance and complacency, when an empire is at its peak and people can fool themselves into thinking “the empire has always been prosperous, we’ve solved all of the problems, and we will always prosper” (incidentally, this type of false thinking was also common in the 1920â€²s, when government and financial leaders said that the “modern banking system” — overseen by the Federal Reserve — had destroyed instability once and for all).

And as for Wall Street, the best possible time to pillage is when your victim is at the peak of wealth. With America in a huge bubble phase of wealth and power, the Wall Street looters sucked out vast sums through fraudulent subprime loans, derivatives and securitization schemes, Ponzi schemes and high frequency trading and dark pools and all of the rest.

Like the mugger who waits until his victim has made a withdrawal from the ATM, the white collar criminals pounced when America’s economy was booming (at least on paper).

Given that the people were in a contented stupor of consumption, and the politicians were flush with cash and feel-good platitudes, the job of the criminals became easier.

A study of the crash of the Roman — or almost any other — empire would show something very similar.

We pointed out in 2010 that more empires have fallen due to reckless finance than invasion. (Whichever side of the stimulus-austerity debate you agree with, spending walls of money on things which neither help people or stimulate the economy is idiotic.)

Finacialization? Yup, we’ve got that in spades … Economist Steve Keen has also shown that “a sustainable level of bank profits appears to be about 1% of GDP”, and that higher bank profits leads to a ponzi economy and a depression). But government policy has been encouraging the growth of the financial sector for decades: 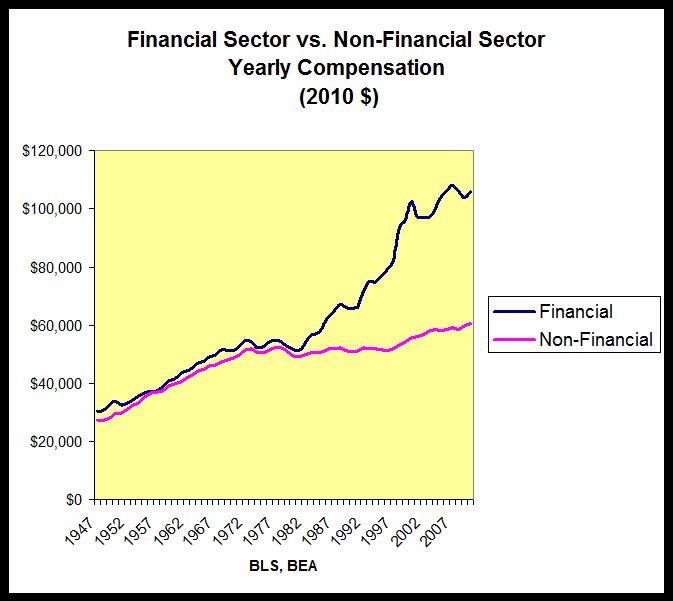 The bigger the bubble, the bigger crash … and we’ve just come out of the biggest bubble in history.

The war in Iraq — which will end up costing between $5 and $6 trillion dollars — was launched based upon false justifications. Indeed, the government apparently planned both the Afghanistan war (see this and this) and the Iraq war before 9/11.

It is ironic that our military is what made us a superpower, but our huge military is bankrupting us … thus destroying our status as an empire.

Empires which fight “one too many wars” always collapse.