A long-held desire of the technocratic worldview involves manipulation and control of a national and even international body politic. “This planetary consciousness,” Zbigniew Brzezinski observes, brings into closer view a single indivisible humanity united by the soft tyranny of depersonalized and omnipresent coercion. “The sense of proximity, the immediacy of suffering,” he wrote at the height of the Cold War, “the globally destructive character of modern weapons all help to stimulate an outlook that views mankind as a community.”[1]

In the perceived absence of such a powerful monolithic threat, mass-mediated tragedy and terror increasingly fulfill a similarly unifying purpose and means to conjure and augment broader political projects.

More so than ever the population witnesses major catastrophic events such as the recent mass shootings in Tucson Arizona, Aurora Colorado, and Newtown Connecticut, and the Boston Marathon bombing through the two-dimensional (audio-visual) lens of major news outlets and social media platforms. A less-examined aspect of this development is how United States law enforcement and intelligence agencies operating under the Department of Homeland Security utilize such media to create and promote news of designer tragedies capable of generating a potent emotional response from the citizenry.

Moreover, the vicariously imagined trauma of such events provides a window of public acquiescence wherein government officials may shape popular sentiment and introduce restrictive legislative programs (stricter gun control in the case of Tucson, Aurora and Newtown) or forthright militarized oppression (the rescinding of posse comitatus and Fourth Amendment protections in the case of the Boston Marathon Bombing) that under normal circumstances would be rejected by the citizenry.

In addition to providing the basis for introducing unpopular policies and practices, mediated spectacles and a digitally interconnected population allow for the precise measurement of public sentiment and reaction to such crises, thereby producing information that is essential for the police state’s continued roll out and effective operation. As social scientist Armand Mattelart argues, such interconnectivity brings to fruition the long held ambition among modern social engineers to regiment the population—a pursuit that can be traced at least to the crude practices of phrenology and anthropometry.[2]

In this vein, the government’s manufacture of tragedy or terror to manipulate the mass mind is hardly a new phenomenon. For example, Operation Gladio sought to control Europe’s political landscape throughout the 1960s and 1970s, and the military and intelligence entities behind it targeted the civilian population with mass shootings and bombings to further their vision. Such projects arguably laid the groundwork for Western governments’ more recent operations including 9/11 and the London 7/7/2005 bombings used to propel the “war on terror.”[3]

With a broadly credulous public increasingly bound to the system of digital networked communication and the 24-hour corporate-driven news cycle, conveying the impression of catastrophe and terror is easily achieved. Indeed, the development and fine tuning of a uniquely-conceived apparatus in this regard has been underway for decades in the US, having come into more formal public view over the past several years. 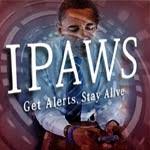 In times of crisis IPAWS “provides public safety officials with an effective way to alert and warn the public about serious emergencies using the Emergency Alert System, Wireless Emergency Alerts, NOAA Weather Radio, and other public alerting systems from a single interface,” the FEMA explains. The new infrastructure “embodies a modernization and integration of the nation’s alert and warning infrastructure and will save time when time matters most, protecting life and property.”[5]

IPAWS was introduced alongside the deployment of a digital transmission architecture that was largely the initiative of the US public broadcasting industry. Indeed, behind the relentless move toward digital broadcast was an intricate and far-reaching apparatus under which the body politic may be united in temperament and purpose through crisis and catastrophe, and where a hierarchized network of information dissemination among officials and major media has made possible designer events that are perceived as real by the broader public at the lower reaches of this communicative pyramid.

In contrast to its analog forebear the digital transmission framework possesses the “dual use opportunity” envisioned by the Bush administration in 2006. John Lawson, President of the Association of Public Television Stations oversaw the $1.1 billion fundraising campaign undertaken by public broadcasting outlets for the transition to digital. His

observations are especially revealing in terms of recognizing the system’s capacities and scope.

Our infrastructure is becoming the backbone of a network of networks that can deliver instant warnings to people wherever they are or whatever they’re doing. Initially this will be a government to government and government to media system. [author’s emphasis] Eventually it will be a warning system for all hazards that can reach practically all devices. You can receive some form of alert on your cell phone or your Blackberry at your kid’s soccer match, or while you’re listening to satellite or broadcast radio, or surfing the net, or watching any of the 500 channels on TV. You’ll be able to receive al–some [sic] form of emergency message almost simultaneously.

…We can send data packets–it’s called data casting. This system, because it’s broadcast, is completely bottleneck-free. It’s totally scalable. It avoids the congestion we saw here and in New York on 9/11 with phone calls and cell phone calls. It can reach a million receivers just as easily as it can reach one receiver, no matter what you’re doing …

Here’s the other point about Digital EAS [Emergency Alert System] and it speaks to the interoperability that the White House has embraced. In the pilot project these packets, these data files, these messages that originated from DHS, were sent out over the air by WETA. They were received by other networks— cellphone companies, pager companies, other broadcasters, cable companies–and retransmitted simultaneously.

Once it’s all packets you can do that–you can move this content around seamlessly. Testing that concept was one of the key goals of the DEAS project. And we established here in the national capital region proof of performance that the concept worked. We had numerous partners in the test in the commercial and television and radio industries, and we plainly established an interoperability was possible which in turn supported one of the key components of the President’s Executive Order. [author’s emphasis]

Lawson’s overview of the DEAS suggest how such a system, used in conjunction with FEMA’s IPAWS, provides the basis for a multifaceted real time orchestration of a mass casualty event that includes careful synchronization with major news media.  Indeed, as discussed further below, National Public Radio is among the IPAWS nework’s 22 “dissemination groups” that includes an array of electronic broadcast outlets and consortia. [6]

As a principal element of its “interoperability” IPAWS uses a Common Alerting Protocol–”a digital format for exchanging emergency alerts that allows a consistent alert message to be disseminated simultaneously over many different communications systems.”[7] This may be used in conjunction with the Geo-Targeted Alert System, another component of IPAWS that can issue alerts and warnings targeted to specific geographic areas. Alongside “Smart 911” and “Reverse 911” technologies capable respectively of profiling individuals and distributing emergency and crisis information to networks of first responders, media outlets, hospitals, and the broader public on a “need to know” basis, the IPAWS system is an all-inclusive network for orchestrating and broadly publicizing staged or authentic crisis events.

[2] Armand Mattelart, The Globalization of Surveillance: The Origin of the Securitarian Order, trans. by Susan Gruenheck Taponier and James A. Cohen, Cambridge: Polity, 2010.

[3] With regard to gun control specifically, the poorly investigated and dubious circumstance surrounding the Dunblane Scotland school massacre and Port Arthur Australia mass shooting–both occurring in the spring of 1996–suggest events that were intended to prompt sufficient public sentiment and calls to further restrict gun ownership.

Republished with permission from: Global Research