A fictitious vision of the future compiled by “western strategists” in which Russia invades Latvia and then launches a nuclear strike on Britain has premiered in a new BBC show titled “World War Three: Inside the War Room.”

The nearly one hour long program, which premiered on Wednesday on the UK’s BBC Two channel, features a war room packed with former top British military and diplomats playing a war game on the European continent.

In the fictional scenario, which as the BBC said was “developed over many months of research and in consultation with military, diplomatic and political experts around the world,” the so-called pro-Kremlin separatists have taken over dozens of towns on the Russian-Latvian border, with Moscow then invading the NATO member state to support them.

A ground offensive against “Putin’s troops” is launched by the US and UK, the show suggests, after which according to the BBC, Russia pushes the red button and launches a nuclear strike on a Royal Navy warship, before the war room is told that Putin has mapped London as the next target.

“Following the crisis in Ukraine and Russia’s involvement in Syria, the world is closer to superpower confrontation than at any time since the end of the Cold War,” said the BBC’s preview for the show, which fused fictional scenarios with archive footage. 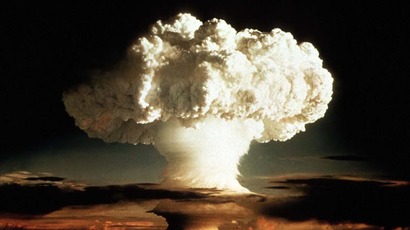 “The way you influence people is by repetition, keeping on with saying the same thing. If you represent Russia as a bad boy and president Putin as an ogre, the one who just threatens the world peace, gradually people will accept that,” he said.

It’s not the first time lately that Russia has been portrayed as an aggressor against a European state. In fall last year, Norway showed its most expensive television series, the ‘Okkupert’ (Occupied), featuring Russian invasion into the state. The Russian embassy in Oslo didn’t express any formal protests and there were no reprisals from Moscow, with the embassy spokesman saying that “hysteria isn’t Russia’s style.”