The anti-war movement is in a race with the Pentagon to stop the U.S. from its goal — pushed back momentarily — of going to war with Syria.

This urgency is what made the International Action Center (IAC) send a delegation from the United States to Syria.

The IAC’s Sara Flounders gives an audio report (below) on the team’s trip so far, featuring an on-air meeting with members of “Over Our Dead Bodies” — the youth encampment of hundreds of voluntary human shields at Syria’s communications centers.

The corporate media shift in tone on Syria, from warlike to congratulatory — falsely applauding the United States for a diplomatic breakthrough — is covering over Washington’s continued war threats.

On Sunday, Secretary of State John Kerry stated that Washington’s goal is to remove Syrian President Bashar al-Assad from power even if all of Syria’s chemical weapons are destroyed.

In an interview with Left Voices’ Andrea Sears, Flounders describes the mood in Syria, explaining that “if anything, support for the government is much stronger now.”

“People in Syria know they face what happened in Iraq, in Afghanistan and in Libya,” she said.

“Democracy will not come with American weapons,” says journalist Oagrit Dandash, organizer of “Over Our Dead Bodies,” whose members have formed a voluntary human-shield encampment of 50 tents in Damascus’s Mount Qassioun.

The IAC delegation will bring back reports after talking with and meeting with some of the more than 4 million people displaced by the U.S.-provoked war, as well as documenting the enormous damage created by this war.

This will include how the Syrian people have mobilized to resist the war and carry out their everyday life, including providing health care.

Participants at the forum in Beirut, Lebanon, besides the delegation, included anti-war leader and MP George Galloway from Britain, ambassadors of Russia, Syria, Lebanon, Palestine, Nicaragua and many leading organizations from Europe, North Africa and Western Asia.

Some of the other organizations sending representatives from the U.S. were the International Anti-imperialist Coordinating Committee (IACC), the Answer Coalition and the United National Anti-war Coalition (UNAC) as well as the IAC. 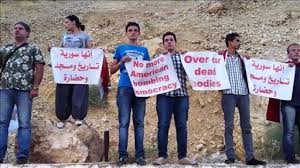