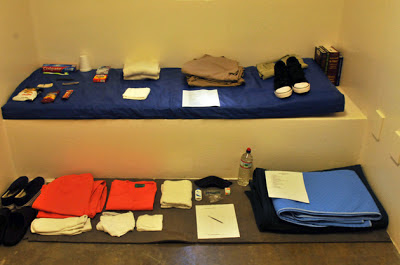 The military has released pictures trying to show how “good” the prisoners have it. The pictures tell a different story.

Stay up to date with the latest headlines via email.

Mother Jones featured a series of pictures released by the military of the equipment used in the Guanatanamo hunger strike the other day. I’ve shown similar ones before here — the tubes, the shackles and the torture chairs.

But the military was clearly trying to show how good the prisoners have it down there so they also showed a picture of the “luxuries” they’re allowed, like “fresh olives.” Here a picture of all the belongings these lucky duckies have:

As Barbara Bush might say, “So many of the people here, you know, were underprivileged anyway so this is working very well for them.” I mean, check this out:

Just look at that comfy old La-z-boy.  They can curl up and watch TV for hours.

Ooops. I accidentally cropped that… 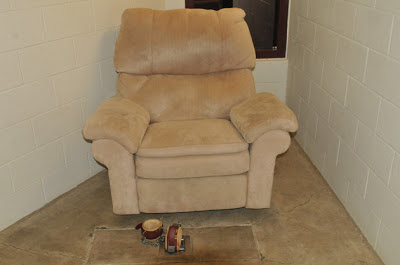 What fun to sit in a comfortable chair and watch TV and movies — shackled to the floor.

I’m sure I don’t have to remind anyone that most of these prisoners have been cleared for release, many of them having been brutally tortured in the past and found innocent of being involved in terrorism.

Michael Shaw has a typically insightful analysis of the pictures  at BagNews Notes:

Although photos from Gitmo have typically excluded the prisoners themselves, not seeing them and knowing they are wasting away makes their absence here that much more palpable. (I think the CYA-minded Pentagon really believes these pictures are informational when they’re not, they’re documentary.) Scenes of olives being delivered that will never be eaten, or full Styrofoam containers getting chucked in the trash, or bottles of Ensure on patient trays next to surgical tubes (to make sure you don’t die on us while the world is watching) can’t help but prompt us to see the prisoners in our own minds (or even imagine we’re getting the treatment).

While the government and the military pretend these photos

This article originally appeared on : AlterNet