The US “war on terror” has backfired, strengthening extremists in Afghanistan and Somalia and turning them into legitimate political actors in the eyes of their local populations, a thinktank said today.

The Senlis Council, which has strongly criticised US policy in Afghanistan in the past, is particularly scathing of the Bush administration’s “abject policy failures” in Somalia.

It said air strikes, support for Ethiopian troops that attacked Somalia last year and the ill-timed designation of a radical Islamist group, al-Shabab, as a terrorist group had been successfully exploited by the insurgency to boost recruitment.

“The lack of strategic acumen present in the ‘war on terror’ in Somalia and Afghanistan is in fact enabling the spread of the insurgencies present throughout both countries,” said Norine MacDonald QC, the council president.

“The US is the common denominator in both countries — instead of containing the extremist elements in Somalia and Afghanistan, US policies have facilitated the expansion of territory that al-Shabab and the Taliban have psychological control over.” 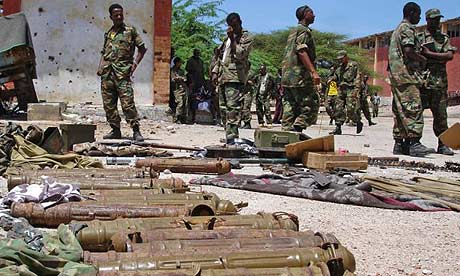 Ethiopian soldiers in Mogadishu, Somalia, guard a cache
of ammunitions they said were used by insurgents during
two days of heavy fighting. Photograph: Mustafa Abdi/AFP/Getty

Aid groups say Somalia, wracked by anarchy and violence for decades, is suffering its worst humanitarian crisis since 1993.

Militias linked to the former Islamic Courts authority, which controlled Mogadishu in the latter half of 2006, are waging a guerrilla war against the occupying Ethiopian troops and the weak central government. With a small African Union peacekeeping force reduced to the role of bystander, several thousand civilians have been killed in the crossfire since early 2007.

The UN, which considers a wider peacekeeping mission too dangerous, says 700,000 people fled Mogadishu last year. A 10-mile stretch of road outside the city now hosts more than 200,000 people, humanitarian groups say – perhaps the biggest concentration of displaced people anywhere in the world. According to Phillippe Lazzarini, the UN head of humanitarian affairs for Somalia, 2.5 million people are in need of food or other aid.

Against this grim backdrop, the Senlis Council, in its 79-page report, directly accused the US of undermining reconciliation efforts by backing the hardline president, Abdullahi Yusuf, instead of the more moderate prime minister, Nur Hassan Hussein.

According to the security thinktank, the US government in February disrupted negotiations with opposition parties – including hardline Islamists – by exerting pressure on the prime minister to exclude certain groups and individuals from a reconciliation process, particularly those on a US list of designated terror suspects.

The council urged Bush to end all bombing operations in Somalia, back a phased withdrawal of Ethiopian troops who are shoring up Yusuf, and create a UN stabilisation force to neutralise the power of Yusuf’s transitional federal government.

“President Bush has the perfect opportunity to adorn the twilight of his final term in office with a success story in his self-proclaimed war on terror — a fast track ‘surge for peace’ to end the current Somali crisis,” the council said.

Yusuf personally heard calls to lead a reconciliation effort during a visit to the US. Norm Coleman, a rightwing Republican senator, yesterday urged the Somali leader to reach out to “all stakeholders not associated with terrorism”.

“The president said he took my words very seriously, and would maintain his commitment to reconciliation,” said Coleman, who represents Minnesota, a northern state where more than 10,000 Somalis have settled.

Last month, the Bush administration granted Somalis living in the US under temporary protected status an extra 18 months as conditions in Somalia remained “dire”.

As for Afghanistan, the Senlis Council said the resurgent Taliban provided a bleak example of how the US-led war on terror had failed there as well.

It said: “The Taliban and al-Shabab are successfully exploiting policy mistakes such as aerial bombings, ongoing poverty, and aggressive foreign military presence to the extent that they are increasingly viewed by local populations as representatives of their legitimate political grievances.”