The February 2, 2018, episode of CounterSpin re-aired a classic interview with the late Robert Parry, first broadcast on November 16, 2007; Steve Rendall interviewed him about his essay “Why We Write.” This is a lightly edited transcript. 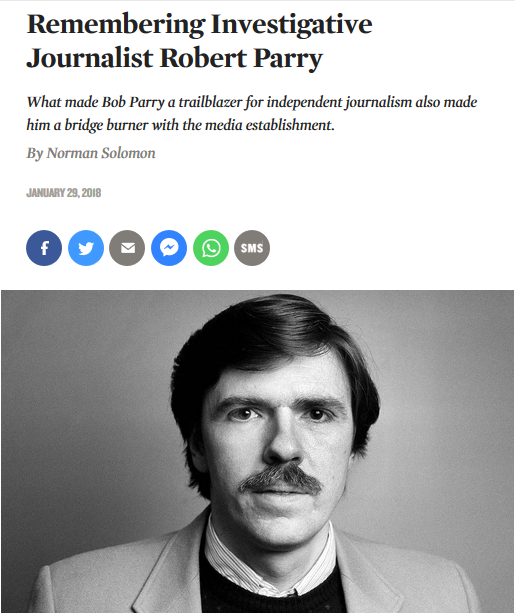 Janine Jackson: When Robert Parry worked at Newsweek, after breaking his first big stories with the Associated Press, he was once told that a story on financial skulduggery by the Contras had to be watered down, because Newsweek owner Katharine Graham was having Henry Kissinger as a weekend guest. It was that sort of thing that led Parry to leave corporate media, but, as Seymour Hersh was quoted in The Nation, Parry didn’t hate media; just lousy journalism. Robert Parry spoke with CounterSpin‘s Steve Rendall in November of 2007. More than 10 years old, this interview’s relevance is undimmed. Here’s Steve Rendall:

Steve Rendall: How bad journalism harms, and how good journalism can make things better, and what role media have played in bringing the United States to its current state of affairs, are basic questions addressed in  “Why We Write,” an essay published by ConsortiumNews.com on November 13, and written by the site’s founder, Robert Parry.

Before founding Consortium News, Parry broke some of the most important stories in the past 30 years, including several scoops on the Iran/Contra scandal for the Associated Press and Newsweek. His latest book, co-written with his sons Sam and Nat, is Neck Deep: The Disastrous Presidency of George W. Bush.

Robert Parry joins us now by telephone from Virginia. Robert Parry, welcome back to CounterSpin.

Robert Parry: Well, thanks for having me.

SR: Robert, near the beginning of your piece, you say that in trying to understand what’s gone wrong with the US political system in the last three decades,

I have come to view the core problem as the use of mass media to inject Americans with a synthetic reality that misrepresents recent history, exaggerates external dangers and ridicules the few citizens who object.

That’s a lot of responsibility for the press. What do you mean by “synthetic realities,“ or, as you refer to them elsewhere, “false narratives”?

RP: The idea of false narrative would be to try to explain to the American people how things are happening, or why things are happening, based on historical facts that aren’t really facts, or, put differently perhaps, cherry-picked facts. And we’ve seen this evolve over the last 30 years in particular, especially after the era of the Watergate period and the Vietnam War protests, which were followed by the American news media becoming more aggressive, doing stories like the Pentagon Papers, which actually revealed real narrative.

So at that point, in around the mid-’70s, we saw this effort—a very concerted effort—by folks, particularly on the right, who felt harmed by the Watergate scandal and by these other events in journalism, to essentially rewrite history and to establish a narrative that would serve their ends. And in many cases, this relied on misinterpreting facts, selecting pieces of information that tended to support the narrative, but were not really accurate or truthful.

So what we had as America moved forward was, increasingly, sets of false narratives. Sometimes they could relate to larger issues, like who won the Cold War, or how it was won, or sometimes it could relate to individuals, as to whether or not they’re liars, or whether they are good public servants. So you had this combination, this ability to present the American people with accounts that weren’t real. And I think as this period evolved, and we saw groups like the neoconservatives step forward, they were particularly adept at setting up these false narratives and pushing them.

RP: One of the early ones, I would guess, would be when you get to the mid-1970s. At that point, the Central Intelligence Agency was beginning to detect signs of a Soviet decline. One of my intelligence sources told me over lunch once that at that point, the best sources the CIA had in Moscow were recounting the technological failures and other stumblings of the Soviet system. It was becoming essentially dysfunctional by that period of the early- to mid-’70s. This information helped shape what Secretary of State Kissinger and then-President Nixon and President Ford called their strategies of détente, that was to negotiate some of the most dangerous elements of the Cold War, so that the world would be a lot safer place. It would essentially bring the Cold War to a conclusion at that phase. 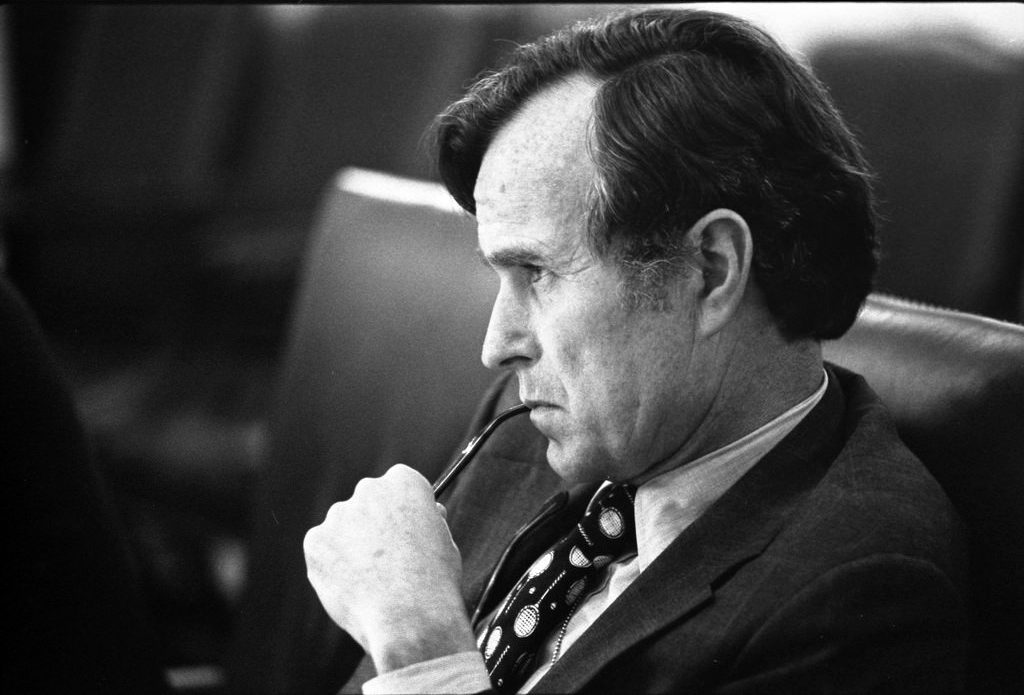 This was seen as a threat to some of the old Cold Warriors, some of their military-industrial backers, and to a group that was beginning to emerge then, a group we now call the neoconservatives. They first sort of arose in a very interesting event, which occured in 1976, when then–CIA Director George H.W. Bush, under pressure from the right, allowed in this team of right-wing ideologues to examine the CIA’s intelligence on the Soviet Union. This became known as the “Team B” experiment. And despite the evidence that the CIA was assembling of the declining Soviet Union, the neocons—this group was essentially headed by a young arms control expert named Paul Wolfowitz—this group essentially cherry-picked the evidence, and concluded what they wanted to conclude: that the Soviet Union was this Leviathan that was surrounding and threatening the United States.

And that idea picked up pace in the late ’70s, as the right wing built their own news media, began to push these ideas. There was a group called the Committee on the Present Danger that was very influential; they talked about the “window of vulnerability,” in which the Soviet Union was going to be able to have a first strike against the United States, and possibly force the US to surrender.

It was all rather alarmist, and as we look back at it, kind of crazy. This was the shape of the false narrative that really took hold of the United States in the 1980s, with Ronald Reagan’s major military buildup, the support of dirty wars in Central America, and insurgencies like that fought in Nicaragua against the Sandinista government, or in Angola against that government. So there was this tremendous push to conduct these kinds of operations, with the sense that there was a great, great danger that was getting worse for the United States—when the reality was the Soviet Union was stumbling toward its end. And, ironically, when you get to the latter part of the 1980s, and the Soviet Union actually collapses, the CIA—which had been under enormous pressure not to see these signs of decay—was accused of missing the collapse of the Soviet Union, but it really wasn’t true; they’d been blinded, so they couldn’t see the collapse of the Soviet Union.

And then, when you get to that period, instead of accepting that maybe the CIA was right back in the 1970s, that the Soviet Union was heading toward a demise, the new false narrative the neocons put together was that Ronald Reagan had won the Cold War by being tough, by having the military buildup, by supporting these wars around the world. And that, essentially, has continued to color how Americans see the world, and who’s allowed to shape that vision up to the present.

The neocons came back in force with George W. Bush’s presidency, and they continued their old tricks: They exaggerated dangers, they cherry-picked the evidence, and that set the stage for the United States going into Iraq. So we still have the same ideas, the idea of creating these notions of larger dangers than really exist, and that then driving US foreign policy.

SR: It seems that the false narratives also inform the debate around a possible Iranian incursion. Bob Parry, why do you think the press is the core problem? Couldn’t it just be that they’re following official agendas, taking their leads, say, from the White House? 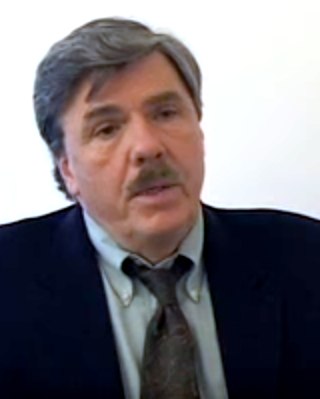 Robert Parry: “Their careers were not well-served by trying to maintain the high standards of journalism—that is, really seeking the truth.” (image: Our Hidden History)

RP:  To some degree, that’s certainly true. But what happened, when you go back, again, to that very important period of the mid- to late ’70s, what the right did was it organized itself, got together its foundations, began to invest heavily in building a media infrastructure, and that included their own magazines, ultimately their own newspapers, radio stations, television networks. They also built organizations to go after individual reporters, groups like Accuracy In Media and the sort of media research groups that the right had.

So they put a lot of pressure on the mainstream journalists to toe the line, and those of us who were in the mainstream press in that time felt this pressure enormously. They would try to lobby our editors to fire us or to demote us. So over a period of time, it became clear to most working journalists, especially in Washington, that their careers were not well-served by trying to maintain the high standards of journalism—that is, really seeking the truth, questioning those in power and those trying to sell them these lines—it became easier to go along with it.

And so I think it was a combination. It was certainly the pressure from people in government and especially the neocons, but it was also true that the American press corps had very little incentive to continue to fight for the truth. And in fact, instead, it went the other way: to go along. So this combination of factors has led the country to the mess it’s in right now.

SR: Many journalists have helped to promote false narratives. Certainly this show has spent a lot of time spotlighting them over the years.  It’s also true that good journalism must be the antidote. Isn’t this the key to your headline, “Why We Write“?

RP:  Sure, the whole point of what we try to do at ConsortiumNews.com, when I founded it back in 1995, was to maintain those old journalistic standards, and just put them into a new medium, the internet. The idea was, this would be a way to sort of circumvent some of the obstructions and pressures that I was encountering, but many other journalists also were encountering. So that was the point, and if there is going to be a hope to reestablish a kind of honest narrative for the country, which is vital in a democracy, I think you do have to have journalists who are truly committed to getting at the truth, not simply “playing along.” So I think in that case, there really has to be a significant investment of time, effort, resources to getting that kind of an operation up and going.

JJ: That was Robert Parry with CounterSpin‘s Steve Rendall in 2007.