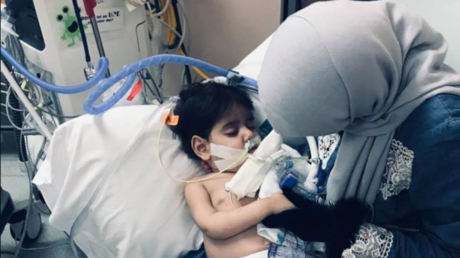 A heartbroken Yemeni mother, who fought for an American visa for months so she could see her dying son, got to spend just 10 days with him before the two-year-old passed away in a US hospital.

Abdullah Hassan passed away on Friday from a rare brain disease, hypomyelination, in a children’s hospital in Oakland, California. His father, Ali Hassan, an American citizen, brought him there five months ago in hopes of saving his son’s life. His mother, a Yemeni national, was unable to be with her baby, because an executive order signed by President Trump in 2017 excluded citizens from seven –mainly Muslim– nations.

Before Abdullah and Ali returned to the US, their family lived in Egypt where they settled after fleeing the war in Yemen in 2016. While Ali Hassan managed to secure an American passport for his son, the mother was denied multiple visa requests starting from August 2017 because of the new travel restrictions.

Finally, following an intervention and a lawsuit from the Council on American-Islamic Relations (CAIR), the boy’s mother Shaima received a visa waiver from the State Department and rejoined her family in California on December 19. Just over a week later her son died.

“I’m a US citizen, Muslim and US citizen. The Muslim Ban kept my wife from coming to the US for over a year. It forced me to choose between my son’s health and keeping our family together,” Ali Hassan said at the funeral, held Saturday, expressing hope that the Muslim community will keep on fighting against the blanket travel restrictions.

Heartbroken and disturbed by the news, the online community expressed condolences to the Hassan family, many wondering how the US immigration system allowed this to happen.

It’s so upsetting that the Muslim ban meant that a Yemeni mother couldn’t be with her dying, 2 year old son who was being treated in California for a genetic related disease. He died just days after his mother arrived to be with him. What kind of humanity is that?

The cruelty America has openly become in just 2 yrs is chillingly shocking to behold!!

We’re going downhill, folks. Our toes are tipping into the top surface of hell! We’re being destroyed frm within! We need a lifeline of renewed faith in decency & humanity to fight this demon!