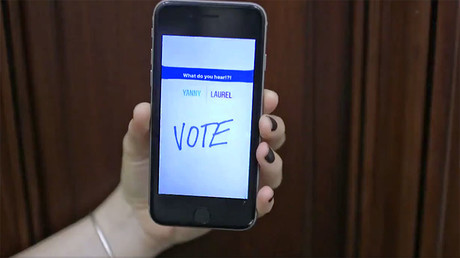 It’s taken the internet by storm, led the US Air Force into a spot of turbulence, and now staff who have escaped the high employee turnover at the White House have gotten stuck in to the debate.

The infuriating audio clip has split people into two camps – can you hear the name ‘Laurel’ or ‘Yanny?’ The online parley is not unlike the ‘Dress’ phenomenon of 2015, when people effectively argued over the color of a piece of cloth.

“So clearly Laurel,” Ivanka Trump, the president’s daughter, remarks in the White House ‘statement’ on the matter, while Vice-President Mike Pence just wants to know who Yanny actually is.

A series of White House senior staffers chime in on the debate, before Trump finally weighs in.

READ MORE: US Air Force apologizes for Yanny/Laurel tweet about A-10 attacking Taliban