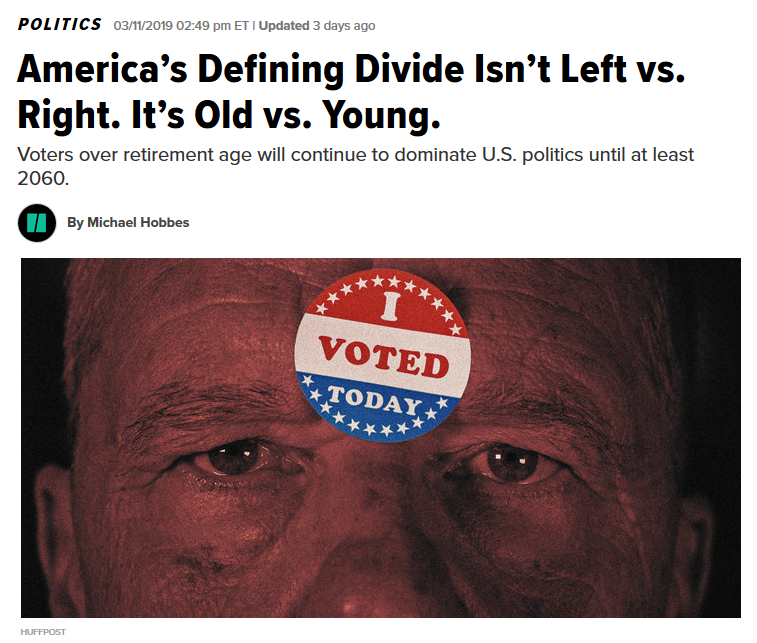 There continues to be a large market for pieces saying the big conflict in the US is generational rather than class. The HuffPost (3/11/19) made its latest contribution this week.

The piece is more than a bit confused, but its headline explicitly gives the intention: “America’s Defining Divide Is Not Left vs. Right. It’s Old vs. Young.” Beyond this basic point—as in, worry about age, not class—it is difficult to figure out what the article is talking about.

The subhead tells readers, “voters over retirement age will continue to dominate US politics until at least 2060.” This might lead us to believe that the piece is talking older voters generically, as in people over age 65 or age 62, but then much of the discussion focuses on the baby boomers. By 2060, the youngest baby boomer will be age 96 and the oldest will be 114. It doesn’t seem plausible that the survivors among this group will be dominating politics. Most of the baby boomers will have died off by 2040, and their influence will be radically diminished by 2030.

But even as a story describing the baby boomers, the piece gets many things wrong. It tells readers:

Four out of five older families own homes, compared to just one in four younger families. Most own stocks and a large plurality are business owners. Nearly 1 in 9 older households are millionaires and, according to a 2015 study, are the only age group in America whose net worth has increased since 1989.

Politically speaking, this means older households have a profoundly different narrative of the US economy than every other cohort. Gen Xers and millennials, who have seen their incomes stagnate and their living costs explode, are gravitating toward candidates who prioritize issues like student debt and income inequality. Older voters, by contrast, will be more likely to vote for candidates who promise to boost the stock market, lower taxes and push up property values.

While most older people own stock, they do not own very much. In 2016, the average amount of wealth outside of a home for the middle quintile of people between the ages of 55 and 65 was $99,200. For the fourth quintile, it was just $25,400. If two-thirds of this wealth was invested in the stock market, it still does not imply a very large stake in the market for most of this cohort. 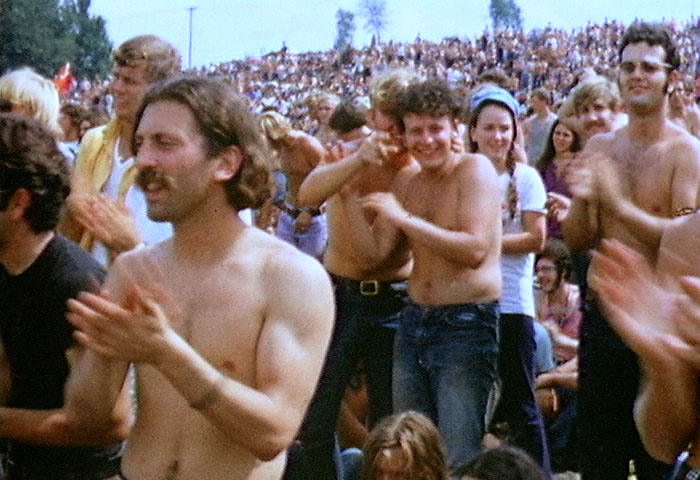 The economic experiences of baby boomers are quite different from earlier generations of retirees. (cc photo of Woodstock concert by Derek Redmond and Paul Campbell)

It is also worth noting that home equity stakes for the cohort between the ages of 55 and 64 declined sharply between 1989 and 2016, falling from 81.0 percent to 58.5 percent for the middle quintile. This means that, while most workers in the middle quintile approaching retirement had their home almost paid off in 1989, most workers in this age group in 2016 could look to paying off a mortgage long into their retirement.

Social Security benefits will also be lower relative to lifetime earnings for baby boomers than earlier generations. The increase in the age for receiving full benefits to 66 for those born after 1946, and to 67 for those born after 1960, amount to a 6 percent and 12 percent cut in benefits, respectively. Changes in the calculation of the consumer price index made in the 1990s will also reduce average benefits through retirement by roughly 5 percent. Retirees today also pay a much larger share of their income in healthcare expenses than was the case in 1989, when a larger share of a smaller bill was covered by Medicare.

The idea that income stagnation did not hit the baby boomers also contradicts reality. Wages began to stagnate in 1973, when the youngest baby boomer was nine and the oldest was 26. Wage stagnation was something the boomers dealt with for the bulk of their working lifetimes.

It’s not clear what it means in saying “a large plurality are business owners.” The overwhelming majority of older households do not own a business.

It then tells readers:

Older Americans, she said, will need better and cheaper government services. Their stances on policy and their dominance of the electorate, however, will increase pressure to raise taxes on everyone but themselves ― i.e., the young and the poor.

“If you ask seniors if we should preserve Social Security and Medicare for their grandchildren, they say yes,” Campbell said. “But their presence in the electorate might prevent that.”

It’s not clear what Campbell—Andrea Campbell, a Massachusetts Institute of Technology political scientist—means by this assertion, but as a practical matter, older voters have consistently opposed to plans to cut Medicare and Social Security, even when most or all of the cuts would hurt younger people who are not yet benefiting from these programs.

The piece concludes by going into the racial composition of the elderly:

The largest gap between older and younger voters is on the issue of race. Nearly 80 percent of Americans over 65 are white, compared to 52 percent of Americans between 6 and 21. In a 2017 survey, 1 in 5 older respondents said they would oppose a member of their family marrying someone of another race, compared to just 1 in 20 millennial respondents.

While the racial gap is large today (presumably “white” refers to non-Hispanic whites), that will be much less the case in 10 or 15 years, when immigrants who came here in the 1980s and 1990s are reaching retirement age. Insofar as we are focused on politics through the year 2060, as suggested by the subhead, some of the non-white young people in 2017 will be hitting retirement age by this point.

We have seen a massive upward redistribution over the last four decades. Efforts to use racism or ageism to distract the public from this fact are likely to persist until and unless it is reversed.

You can send a message to the HuffPost at corrections@huffingtonpost.com (Twitter: @HuffPostPol). Please remember that respectful communication is the most effective.