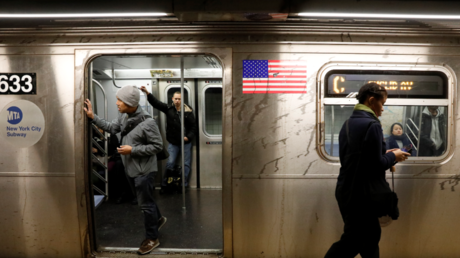 A Brooklyn woman caught on video repeatedly kicking and racially abusing her fellow subway passengers has been hit with charges after being placed under citizen’s arrest by another commuter.

A Brooklyn woman caught on video repeatedly kicking and racially abusing her fellow subway passengers has been hit with charges after being placed under citizen’s arrest by another commuter.

Anna Lushchinskaya, 40, was charged with felony assault on Tuesday morning after she was filmed racially attacking a 24-year-old fellow passenger on the 7:50am northbound D train in the Sunset Park neighborhood, NYPD said.

Lushchinskaya was filmed by early morning commuters as she screamed “f*** off, f*** off!” at the woman while bizarrely preparing herself to fight the calm passenger in a crowded car. The blonde aggressor can be seen taking off her gloves, tying up her hair and securing her belongings in preparation for combat. Police said the altercation occurred after Lushchinskaya bumped into the victim.

Podcaster Juan Ayala filmed the incident which progressively escalated from Lushchinskaya slapping the silent woman’s phone, to repeatedly kicking her, whacking her with her umbrella and attempting to stab her with her keys. The victim suffered lacerations to her face, according to ABC7.

Fellow passengers attempted to intervene by holding the irate woman back and telling her to stop, one man is repaid for his peace-keeping efforts by being called “f***ing retarded” for “not letting me hit her back”.

The situation turned from ugly to racist when Lushchinskaya eventually reveals herself by calling the woman a “f***ing ch**k.” The crowd erupts in gasps at the woman’s tirade, with Ayala shouting: “Your white privilege ain’t working over here, get the f*** out of here with that racist s***.”

Separate footage of in the incident posted to Instagram showed Lushchinskaya spitting and referring to Ayala as a “f***ing Mohammed”. “B***h, I’m Dominican,” Ayala responds. “Did you just try to call me Muslim or some s***?”

After she hits Ayala’s phone from his hand he tackles her to the ground and carries out a citizen’s arrest until the police arrived. “She tried me so I had to detain her until the cops showed up,” Ayala wrote along with a photo of himself holding the aggressor’s hands behind her back. Another photo shows the woman in police custody outside the station.

Lushchinskaya was previously charged with another assault on the same train for an incident on June 28, according to reports.