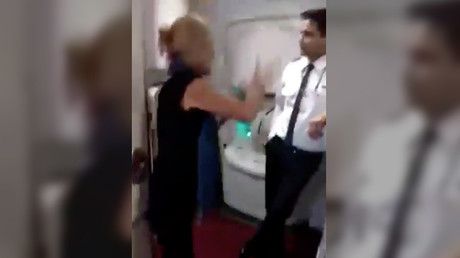 Airline crew on long haul flights have a tough job as it is, but abusive passengers can make an already stressful time much worse for all on board, as was the case in a bizarre, alcohol-fuelled rant caught on camera last week.

An as yet unidentified 50-year-old woman launched a disgraceful, entitled and vitriolic tirade against Air India cabin crew who refused to serve her more wine on a flight from Mumbai to London’s Heathrow Airport Saturday. Mobile phone footage reportedly shot by a crew member of the shocking diatribe has gone viral online.

If an Indian had done this he or she would be handcuffed on board & the entire media would go to town over this for the next 2 weeks. But because she is white all is forgiven. Sad.

“You treat business class passengers like this? I work for all you f***ing people… But you won’t give me a glass of wine,” the woman shouts.

Bellowing at the admirably stoic staff, the passenger went on to claim to be an international human rights lawyer who has “f***ing helped Palestinian people.”

Harrassed by SM regularly for some or other misfortune, #AirIndia crews must be scared to even touch her. Hope you remember what happened to AI staff during #RavindraGaikwad SS MP episode.
Drunken lady is flying & abusing crews, drunken director disposed for life time b4 flying

The crew were advised not to serve the woman any more alcohol after complaining to the captain. This made an already uncomfortable situation far worse as the irate, barefoot passenger launched a bizarre rant against the crew and her fellow passengers, whom she inexplicably said “failed to stand up to injustice.”

Emergency landing for a drunk woman??? 😅😅😅
Its not a bus that u can stop n push out a passenger!

This was a minor incident!

Excellent professional behaviour by Air India crew. What can say about this passenger? Disgusting behavior – she should be on the no-fly list.

As the situation escalated, the woman reportedly spat at the pilot who attempted to calm her down.

READ MORE: ‘Can we even call ourselves British anymore?’ UK govt could ban airport morning drinking

Drunk Irish passenger abuses Air India as she was refused another glass of wine. Passenger allegedly was drunk and that’s why the crew didn’t give her more alcohol and passenger goes on a rant abusing the crew and people of Asia. pic.twitter.com/A0bOkwYrnr

The roughly 10-hour-long flight concluded with the woman’s arrest upon arrival at Heathrow Airport. She is believed to be Irish, although seems to speak with a London accent.

She doesn’t sound Irish at all. She sounds very English to me. But that doesn’t mean all English are like this. Her nationality shouldn’t have been mentioned. This is why drunk people shouldn’t be allowed to be boarded on a plane and also no alcohol should be served in the plane

If she was Irish there would of been a sing song

“At approximately 1.30pm on Saturday, 10 November, a 50-year-old woman was arrested…on suspicion of racially aggravated public order, common assault and drunk and disorderly and taken to a west London police station,” a police spokesperson told RT.com.