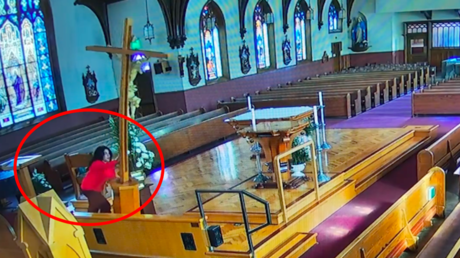 A 23-year-old woman was arrested after CCTV cameras caught her brazenly vandalizing a California church in the middle of the day by toppling a huge crucifix and tearing down art, causing more than $15,000 worth of damage.

Jackeline Chavira was arrested by Watsonville Police over what officers termed a “vandalizing spree” at St. Patrick’s Church in Santa Cruz County on Wednesday.

In security footage released by police, Chavira can be seen entering the church and looking carefully around before stepping onto the altar and pushing over the 15-foot (4.5-meter) crucifix. It takes her a few attempts to knock the huge cross down, and she quickly runs from the scene as it falls to the ground.

The footage, shared on Thursday, has been viewed more than 75,000 times on Facebook.

Afterwards, the young woman allegedly went next door to a prayer room and threw a religious statue on the ground before tearing down two large pieces of artwork, according to police. Two parishioners were praying in the room at the time.

Officers say that Chavira also targeted multiple small businesses nearby in which she broke two religious statues, as well as stealing roses and a soda. She was eventually arrested and booked for vandalizing a place of worship, defacing property, burglary and disobeying a court order, with bail set at $25,000.