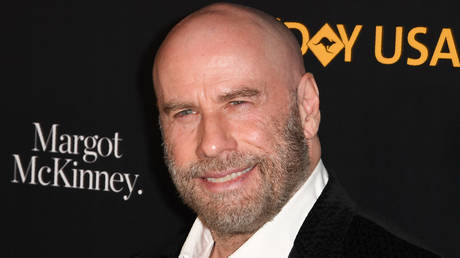 The Hollywood star’s recent trip to Russia – a PR jaunt to a country fascinated by aging celebrities – didn’t escape the eagle-eyed Russia sleuths over at the Daily Beast. “Why is John Travolta palling around with Putin’s cronies in Russia?” the liberal news site asked on Saturday. Raw Story later picked up and rewrote the story.

The ‘Pulp Fiction’ star’s transgressions included meeting with “elite members of President Vladimir Putin’s court,” having his picture snapped by Russian paparazzi, and praising Russia’s culture of “music, ballet, and avant-garde artists.” He also chatted with Kremlin press spokesman Dmitry Peskov about the “Russophobic moods” of American authorities and reportedly said that “ordinary Americans” hold a positive attitude towards Russia, seemingly despite the best efforts of US media.

Travolta’s Russia visit saw the veteran actor attend a music awards ceremony at Moscow’s prestigious Bolshoi Theater. However, the presence of a Kremlin official meant the Beast only saw a sinister propaganda effort. The article sarcastically noted that Travolta “did everything just the way the Kremlin wanted him to,” meaning he smiled at Russian TV cameras and thanked his hosts.

Well, he was hardly going to skip down the road to the Kremlin and snoop through Putin’s office looking for an envelope with ‘Collusion Evidence’ written on it, was he? Still, that wasn’t going to stop the Daily Beast looking for ulterior motives.

For almost two years, the news site has been breathlessly charting every twist and turn of Mueller’s investigation. The Daily Beast reported the now-infamous ‘Steele Dossier’ (which accused President Trump of, among other things, hiring two Russian prostitutes to pee on a hotel bed) as credible, questioned whether the president was actually “a Russian asset,” and promised readers that Mueller “is connecting the dots” and “has got Trump on collusion.”


Raw Story too has been feeding its readers a steady diet of collusion and conspiracy. The site accused Trump of a “desperate cover-up” of his alleged Russian ties, promised “damning evidence” of a Kremlin/Trump plot, and called the Russia non-story “the single greatest scandal in the history of the US.” Trump, it said, was “running scared” from Mueller’s investigation.

Now that that’s not actually happening, the adjustment must be difficult. Indeed, pundits and anchors from all networks have served up an impressive display of denials, evasions, and on-air strokes in recent days. Some, like the Daily Beast, are just determined to keep the party going, even after everyone else has long since gone home.