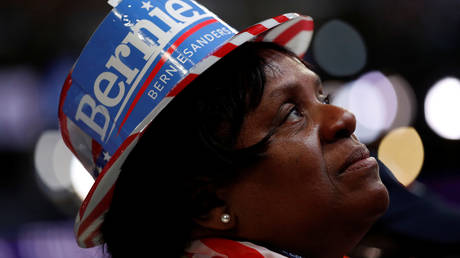 Bernie Sanders enters the 2020 race for president as the most well-known candidate in an already crowded field of Democratic hopefuls, but will enough Americans embrace his progressive agenda, or will he be forced to compromise?

The Vermont senator and self-described ‘democratic socialist’ narrowly lost the nomination to Hillary Clinton in 2016 after being hindered every step of the way by the Democratic establishment, which was revealed to be spinning things in Clinton’s favor — something a few party figures even admitted after the fact.

Sanders built a hugely popular grassroots movement in 2016 which took the media by surprise and shocked the party establishment. It proved there was genuine demand for a more left-wing candidate. The question now is, will he be able to do it again — and this time actually win?

While Republicans are still (for the most part) on board with Donald Trump, one of the most interesting aspects of the 2020 campaign will be the ever-deepening split within the Democratic party between more centrist, establishment-minded candidates and more progressive, socialist candidates.

While some of Sanders progressive positions have become more mainstream since 2016, one of the biggest challenges he faces is the task of winning enough voters over to the progressive movement. If his campaign gets off to a successful start, if he is polling well — and mostly importantly, if he starts winning primaries — it could force the rest of the Democratic field to the left — particularly someone like Kamala Harris, who is already facing criticism for not having a progressive enough record. Despite that, Harris publicly distanced herself from the Sanders wing of the party this week, confirming she is “not a democratic socialist.”

On the other hand, if the likes of Harris steams out ahead, Sanders will need to decide whether he can compromise on his ideals — or considering abandoning the race altogether.

Another question that will likely come up for Sanders is that of his age. Many of his critics have already suggested that the 77-year-old might be too old to run for president again and that the party needs a younger, fresher face in 2020.

There are some hypocrisies here, however, particularly coming from the media. Last year, CNN published a ‘definitive ranking’ of possible 2020 candidates and put Sanders at number 5, citing his status as a “white male” as a potential hindrance to his campaign — but then turned around and put former Vice President Joe Biden (also an old, white male) in the top spot. Biden has not yet confirmed a bid, but it looks like concerns surrounding age, race and gender might be selective.

Also on rt.com
‘I did inhale!’ Kamala Harris pulls a giggly U-turn on pot legalization


Having said that, there’s also the fact that the Democratic establishment relishes the idea of having a candidate who ‘looks’ more progressive on the ticket (regardless of whether their policies reflect that or not). Harris, as a black woman of Indian and Jamaican descent, is their ideal in that sense.

Harris might also have an advantage when it comes to winning black and Latino votes, demographics Sanders struggled with in 2016. Assuming Harris will automatically have the support of black Americans would also be a mistake (not to mention racist), given her less than progressive record as a prosecutor.

who is the real anti-black candidate?

In 2016, Sanders won 14% of the black vote in the South Carolina primary. It will be interesting to see how statements like the one above play out in a primary field where many voters consider a candidate’s race, sexual orientation, gender, and age a critical factor.”

Allegations of sexual assault and sexual misconduct within Sanders’ 2016 campaign will also likely plague the candidate this time around. Former staffers have accused Robert Becker, who headed Sanders’ campaign effort in Iowa, of sexual harassment and making unwanted sexual advances.

Sanders publicly apologized to the women in question and maintained he was not aware of the behavior, although some claim he knew about and ignored the issue. He also claims he was not aware of a $30,000 settlement paid by his campaign to two staffers who filed a discrimination lawsuit after being fired.

While many have chosen to stick with him, the scandal has also sent some former Sanders aides running to seek refuge in other campaigns, viewing the allegations as something that will make things a lot more difficult for him in 2020, particularly in the era of the #MeToo movement.

Then there’s the ‘Bernie Bros’ — the name given to a certain cohort of Sanders supporters who were accused of misogynistic attacks and obsessive trolling against Clinton, her supporters and journalists online. Sanders himself called the attacks “disgusting” and disavowed those supporters, telling CNN: “I don’t want them. That is not what this campaign is about.”

He will no doubt be hoping the Bernie Bros don’t make another appearance in 2020.

Also on rt.com
‘I can’t go back’: Elizabeth Warren digs herself even deeper hole in ‘Native American’ ancestry row


‘Bernie or busters’ and ‘Clintonistas’

Sanders sorely disappointed many of his hardcore supporters when he eventually endorsed Clinton against Trump in 2016, with many feeling he had abandoned his core principles. Others felt it was his only option politically, given Trump was the alternative. If Sanders had not endorsed Clinton and Trump won, his chances at success in 2020 would be very slim.

Even with that endorsement, however, Sanders will have a seriously difficult time winning over Clinton’s hardcore fans, who blame many of his prominent surrogates for failing to throw their support behind the eventual nominee. Actress Susan Sarandon joined Sanders multiple times on the campaign trail in 2016, but then chose to back the Green Party’s Jill Stein, who Democrats argued was a Russian plant in place to take vital votes from Clinton (despite exit polls showing that most Stein voters would never have voted for Clinton anyway). To this day, some Clinton supporters blame Sarandon specifically for Trump’s win.

As I watched Trump today, I couldn’t help thinking about Susan Sarandon, Jill Stein, Jim Comey, and editors who put a zillion email stories on the front page above the fold and downplayed the Russia story, who did far more on Clinton Foundation than Trump’s. Thanks to all of you! https://t.co/qtKESflwbx

I know. I hate being bitter. It’s such negative energy but when I think of the MSM coverage in 2016 and Susan Sarandon pouting at the DNC convention and Jill Stein sitting at a table with Flynn and Putin … I can’t help by go there.

Clinton fans also tried to paint Sanders himself as a Russian stooge at one stage, pointing to the fact that he spent his honeymoon in the Soviet Union (a terrible sin, according to Democrats of 2019).

Sanders also drew some ire in 2016 for not releasing his full tax returns. While he did release a two-page summary, many asked why he didn’t release his full federal returns. Sanders is known, however, as being one of the least wealthy members of the Senate. What he did release of his tax returns show a combined income between him and his wife in 2014 of $205,000 — so it’s unlikely questions surrounding his taxes will be a major issue for him.

Sanders supporters claimed in 2016 that the media had tried to ignore his campaign, frequently choosing not to cover large rallies that he was holding around the country. On one occasion, the major networks gave Trump’s empty podium 30 minutes of airtime while ignoring a major speech being given by Sanders at the same time.

Having proven his popularity in 2016 (even without the kind of coverage Trump and Clinton received) it will be harder for the media to play down his campaign this time. That is, of course, if Sanders can still hold onto that popularity four years later.