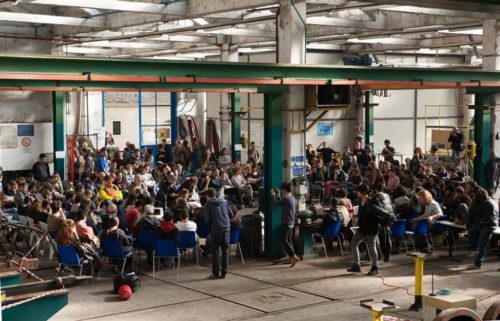 A common feature in every crisis situation, from the upheavals of the early 20th century to the neo-liberal re-structurings of the late 20th century, is the emergence of workers’ control – workers organising to take over their workplaces in order to defend their jobs and their communities. We interviewed Dario Azzellini* to talk about this issue in depth: the emergence of new values and social relations not just in the recuperated workplaces but also in the communities, the need to re-orient production, the overcoming of the separation between political, economic and social spheres, and the role of workers’ control in the larger struggle against capitalism.

Ricardo Vaz:  Why is workers’ control an important issue?

Dario Azzellini:  It is an important issue because if we look at what is socialism, what Karl Marx described, the living example for him is the Paris Commune. It is the people taking matters into their own hands, and the state as such disappears because power is no longer delegated.

But I would say that workers’ control is one first step on a path to socialism, in the sense that control over production and workplace should not be only on behalf of the workers but also of the communities, the self-organised people in general. And even that is still not the last step, because as Marx says, the commune is the finally discovered political…