The world waits with bated breath as a “mad king” descends on Singapore, his finger itching to press the launch button and totally destroy his adversaries. Few disagree that a “radical and absolutist” dictator who can “use the power of the state to suppress the opposition while shielding itself from all potential sanction or limitation” should not have access to a possibly world-ending arsenal of nuclear weapons.

“Surrounded by a clique of sycophants who are willing to justify any course he might take,” there is little stopping this impulsive ruler from making a sudden, cataclysmic decision that could forever alter the course of human history. Indeed, “a party organized around a single extreme personality seems like a brittle proposition.” With this “cult of personality” in place, his people will be dragged unwittingly and hopelessly into the nuclear abyss along with him.

It turns out that the only person standing between this man and the destruction he portends may be North Korean leader Kim Jong-un. 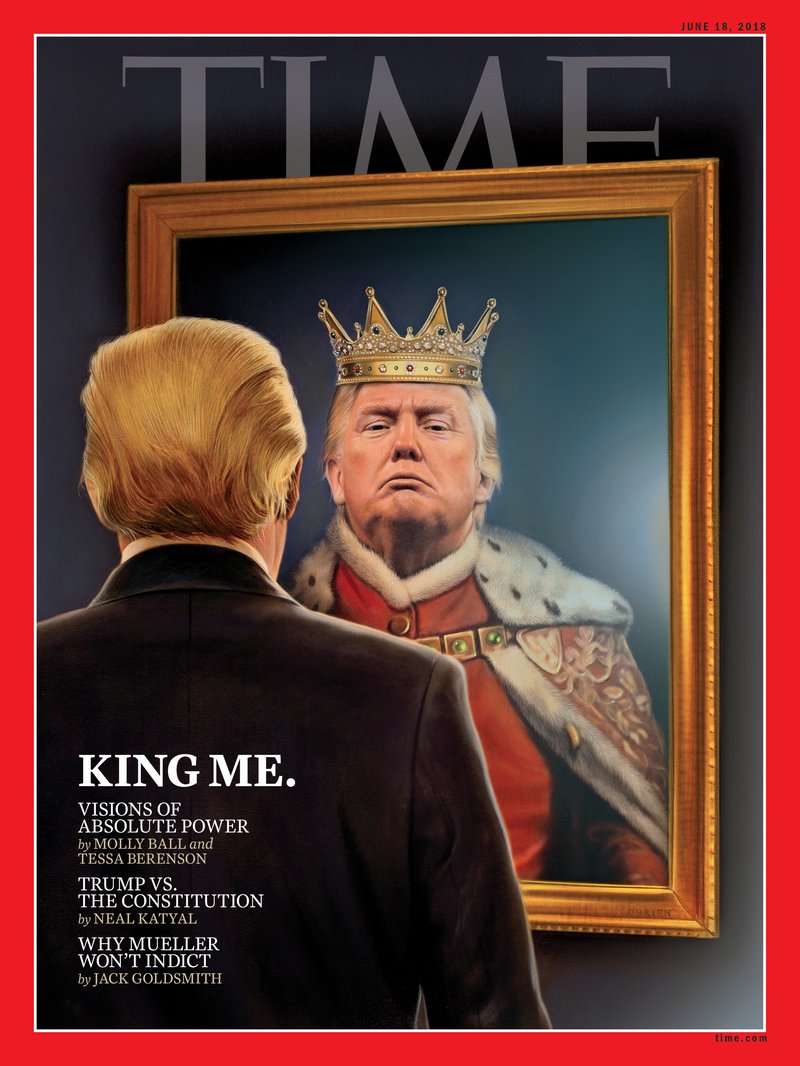 Time (6/7/18) was just one of many outlets that depicted Donald Trump as a “king-in-waiting”—yet corporate media still expressed general dismay that the “leader of the free world” would accept a meeting with North Korean Supreme Leader Kim Jong-un.

In the weeks leading to the historic summit between US President Donald Trump and Supreme Leader Kim, corporate media have lamented many ways the former is converting the presidency into an authoritarian institution. Quoted above, Time (6/7/18), the New York Times (6/3/18), The Week (6/5/18) and The Atlantic (6/7/18) all referred to Trump as a king-in-waiting when he declared a unilateral power to pardon himself.

Esquire (6/4/18), unwilling to publish the word “president” without an asterisk, sees the whole Trump apparatus edging dangerously toward dictatorship, a point on which the Daily Beast (6/1/18) concurred after Trump called for the firing of TBS’s Samantha Bee. The Times (6/7/18) similarly warned of a dictatoresque cult forming around him, while the Washington Post (6/8/18) worried that Trump’s narcissism is isolating the United States from any potential allies.

With an arsenal of over 6,000 nuclear warheads at its disposal, one might expect this concern over the United States’ authoritarian trajectory to be reflected in analysis of events as they unfolded in Singapore. But when corporate media’s focus turns outward, it seems the only radical, isolated and cultish dictator we need to worry about is Kim.

According to Harry J. Kazianis (CNBC, 6/6/18), Trump has already handed over “the ultimate concession, a legitimizing meeting with the leader of the free world—for nothing in return.” The New York Times (6/6/18) also noted that the mere occurrence of a summit with the United States might have resuscitated the image of “a murderous dictator and nuclear lunatic”—referring to Kim. Nevertheless, NBC (6/11/18) envisioned a “best-case scenario” in which Trump-qua-president secures the “complete, verifiable, irreversible dismantlement of North Korea’s nuclear program.”

If Trump really is transforming the office of the president (and the United States along with it) into a hermit kingdom, it is hard to see what is left to justify his insistence that North Korea surrender its nuclear weapons. Trump was already said to have relinquished US moral authority as soon as he took office (FAIR.org, 3/20/17). Both countries cite security concerns, but only one is guilty of waging a campaign of mass murder in the other’s territory (FAIR.org, 9/27/17). And US behavior in Iraq and Libya following disarmament of those countries revealed the worthlessness of its word on this issue (Foreign Policy, 5/30/18), long before Trump reneged on the international agreement with Iran.

A healthy concern about Trump’s authoritarianism is certainly warranted (FAIR.org, 2/3/17), but by construing his domestic politics as the work of an unprincipled, unpredictable and increasingly dangerous tyrant, corporate media have illuminated the fact that there is only one remaining idea that makes a qualitative difference between the president’s nuclear arsenal and North Korea’s: American exceptionalism.

Anders Corr illustrated the exceptionalist logic in Forbes (4/30/17).  “North Korea,” he explains, “is an autocracy that violates human rights and international law and therefore cannot be trusted with this most destructive of weapons.” Western nuclear powers, on the other hand, “are mature democracies that have shown strong support for core international values like democracy, human rights, environmental sustainability and international law.” In other words, as Hillary Clinton once put it, “America is great because America is good.”

For pundits like Corr, the source of the United States’ self-evident legitimacy as a nuclear power lies in its supposed pluralism. In their clarion call about the cult of Trump rising within the Republican Party, the New York Times editorial board (6/7/18) noted that, “by contrast, Democrats show signs of taking a more pluralistic approach,” which “might result in at least one party oriented around a set of ideas.”

The pluralistic symbolism of Barack Obama’s presidency had warded off concerns about Washington’s nuclear capabilities (New York Times, 11/4/08), despite his willingness to wage war in over half a dozen countries and his $1 trillion program to “modernize” the US arsenal. If corporate media can lay responsibility for emerging authoritarianism at the feet of Trump alone, the thinking goes, then the potential for a pluralistic renaissance preserves US ascendancy as a nuclear power.  Contrariwise North Korea, lacking pluralist potential, is by definition a threat to the world order. 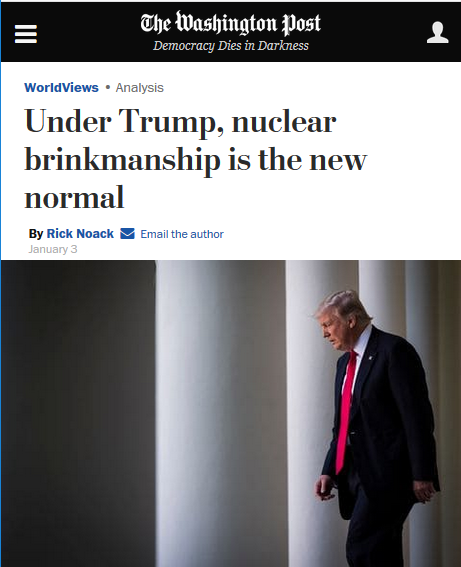 The Washington Post (1/3/18) downplays the role that the US’s thousands of nuclear warheads played in the old normal.

Even still, Trump pushed the envelope and caused much consternation among media elites by suggesting that the United States would be willing to strike first with a nuclear weapon. Rick Noack wrote for the Washington Post (1/3/18) that, prior to Trump, “US leaders have been dissuaded from nuclear-weapons use by moral restraint”—though in fact, as other commentators have long pointed out (e.g., Foreign Policy, 2/19/13), the US is “the country most staunchly opposed to renouncing the first use of nuclear weapons.”

Despite its ignoble status as the only nation in the world to have actually dropped atomic bombs on one of its enemies, the United States’ reputed moral eminence has always served as the basis of apologia for its nuclear aggression. While former US President Harry Truman initially held that “a quarter of a million of the flower of our manhood were worth a couple of Japanese cities,” the evident horrors of nuclear annihilation forced a change in this moral analysis. By 1959, Truman had reconfigured his argument, telling students at Columbia University (Truman Speaks, p. 67) that “the dropping of the bomb stopped the war, saved millions of lives.”

The notion that US nuclear weapons have “saved millions of lives” is so entrenched in the minds of most Americans that Japanese historian Sadao Asada (Living With the Bomb, p. 177) refers to it as “the Truman orthodoxy.” But political scientist Richard Price (The Chemical Weapons Taboo, p. 40) identifies this rationale with a more general US proclivity “to marry the logic of the pursuit of unlimited technological efficiency with the avoidance of war and the amelioration of suffering.” Trump’s bellicose statements and questionable integrity have the awkward effect of undermining a doctrine at the heart of US national identity.

On the eve of the summit, the New York Times (6/11/18) primed its readers by enumerating North Korea’s moral disqualifications, which include torture, imprisonment without trial and assassination programs—which are also, of course, features of the US imperial system.  As Glenn Greenwald (Guardian, 2/18/13) observed years ago, “that the US, due to its objective superiority, is not bound by the same rules as others is the most cherished and aggressively guarded principle” in foreign policy circles.

Despite recognizing the damage Trump has done to this axiom, corporate media are unlikely to change their attitude toward a confrontation between the world’s most and least powerful nuclear nations.  For now, like Trump and Kim, America’s exceptionalism reigns supreme.