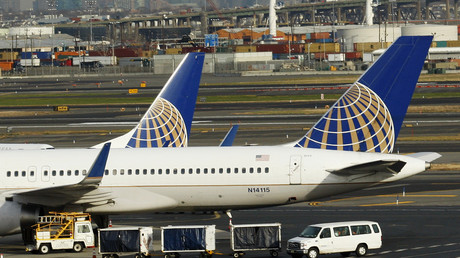 Several UK papers have gone into a panic over a United Airlines pilot who took a nap during a flight from Newark, New Jersey to Glasgow, Scotland, in plain view of the passengers. Aviation insiders say that was perfectly normal.

The sight of a pilot stretched out in a first-class seat catching some z’s an hour into the 7-hour flight caught the attention of a retired police officer. The vigilant passenger later told the Daily Record that before taking a nap, the pilot changed into his daily clothes and left his uniform folded on a nearby seat – a development that made the retiree even more suspicious. After sleeping for about an hour and a half, the pilot woke up and called the crew to let him back into the cockpit, the passenger said.

“I don’t think the captain of a flight packed with hundreds of people should be in such a vulnerable position,” the officer told DR, noting that he would have likely to be banished if caught dozing in a patrol car.

The story was picked up by several British newspapers under equally eye-catching headlines. The sensationalist spin was slammed by several air travel experts, however, who pointed out that the practice of a pilot sleeping midflight is not only normal, but is actually mandated by regulations.

Federal Aviation Administration (FAA) regulations require a pilot to take a rest if the flight time exceeds 8 hours. While there might be a dedicated rest area for pilots on larger jets, on smaller trans-Atlantic planes like the Boeing 757 there is a seat in business class reserved for each of the pilots so they can rest comfortably, wrote John Harper of Boarding Area.

“Nothing else about this situation was unusual in any way,” apart from the pilot partly changing out of his uniform, Harper wrote.

United actually told the Daily Mail that the plane was steered by the crew of three and that the pilot was on his mandated break at the time of the “incident.”