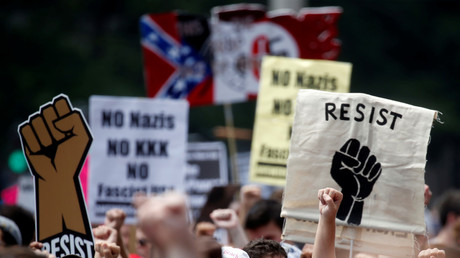 Heavy police presence is seen in the center of the US capital as crowds of anti-nationalists protesters have gathered to protest Unite the Right Rally one year after Charlottesville clashes.

Counter-protesters have gathered across from the White House in Lafayette Park in Washington DC to oppose a white nationalist rally that has been approved to take place in the US capital on Sunday afternoon. Many demonstrators were seen carrying signs stating “shut down white supremacy” and chanting “No KKK, no fascist USA!” “We will be here until these fascist forces are gone, however long that takes,” a protester told AP.

Unite The Right demonstrators have been seen gathering outside the US capital, and will be delivered to the protest site in buses.

The white supremacists rally organizer Jason Kessler earlier said that he expects 100 to 400 people to participate in his event in front of the White House.

Kessler’s escort awaits: a big square of cops, double lines of trucks and cars front and back, a line of motorcycle cops and bike cops on each side. pic.twitter.com/aGmo5eC6Nd

The authorities had promised an enormous police presence to keep white supremacists and counter-protesters apart, and to avoid brawls. Buses carrying the Unite the Right protesters are being escorted by double lines of police cars and a line of motorcycle police. The demonstrators were reportedly told they have to surrender flagpoles.

Scuffles broke out after a counter-protester grabbed Unite The Right participants near a metro station in downtown Washington, photos on social media show.

Failure to separate raging crowds in Charlottesville one year ago resulted in clashes.

“I’m here to drown out hate and amplify this message,” John Walsh, 43, from Boston told USA Today, “As a white, middle-age man, I think I have a voice and feel a duty to use it to counter this insanity.”

Another protester, Bob Baker, said: “I am a patriot. I deeply love my country, I’m deeply disturbed by what I’m seeing these days.”

Meanwhile, more than 100 people have gathered in downtown Charlottesville demonstrating against racism. The rally marked the one-year anniversary of the Unite the Right rally which resulted in heavy clashes between white nationalists and counter-protesters. The group was chanting, addressing police officers who were accompanying them: “Will you protect us?”

The event in Charlottesville was attended by Susan Bro, the mother of Heather Heyer, who was killed when a Unite The Right demonstrator plowed his car into a crowd of counter-protesters. “We have a huge racial problem in our city and in our country. We have got to fix this or we’ll be right back here in no time,” she said.

Charlottesville rejected Unite the Right’s request to stage the repeat rally, so the march has been relocated to Washington DC, where police have promised a heavy presence that will separate the demonstrators from the likely much-larger counter-protester gathering.