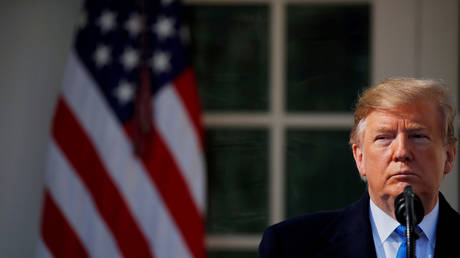 The recent arrest of WikiLeaks publisher Julian Assange has put the White House in the awkward position of having to explain away US President Donald Trump previous praise for the whistleblowing website.

Trump was a fan of WikiLeaks’ whistleblowing back in 2016, when the website released leaked documents from the Democratic National Committee, including the emails of the Democratic presidential nominee Hillary Clinton’s campaign chairman John Podesta. Delighting in the incriminating information that came to light thanks to Assange and his people, Trump declared he loved WikiLeaks, and called the documents a “treasure trove”.

Now that Assange has been arrested and indicted in the US with conspiracy to hack a government computer network in 2010, Trump’s affections are all gone. “I know nothing about WikiLeaks. It’s not my thing,” he said dismissively earlier this week, leaving others to do the awkward explaining.

American media could not help but jump on the opportunity to remind the White House about the president’s past statements – MSNBC even made a point of counting how many times Trump had mentioned WikiLeaks previously, and came up with an impressive 141 in just the final month of his campaign alone. Fox News took the opportunity to ask White House spokeswoman Sarah Sanders about the sudden change of heart.

It turns out those were all jokes.

“Look, clearly the president was making a joke during the 2016 campaign,” Sanderds said.

She also assured Fox News that the Trump administration “certainly” takes the issue “seriously” now, then quickly recovered and turned it into an attack on the Obama administration.

“In fact, our administration is the only one that’s done anything about it,” she said. “We’re the only ones that have taken this whole process seriously in actually doing something to solve the problem.”

Also on rt.com
Toe the line or go to jail: Tulsi Gabbard says Assange arrest is a message to Americans


Sanders said that the only reason Assange is being “looked at” at all is the fact that he worked the US Army whistleblower Chelsea Manning, who handed him over classified US documents back in 2010, adding that it was Obama who commuted Manning’s sentence. Trump himself has called Manning a “traitor“ before.

Assange was arrested by the British authorities after his asylum was revoked by Ecuador, which also suspended his citizenship. He is now facing extradition to the US and possibly more severe charges there.