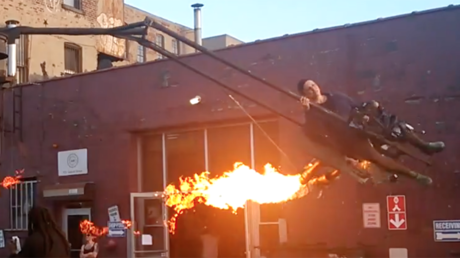 Carnivals promote the great American tradition of valuing entertainment over safety regulations. But one ride really maximizes the fun versus fear factors of carnival rides by building a merry-go-round powered by a jet engine.

A project from the Madagascar Institute in Brooklyn is bound to be a hit at either a town fair or Burning Man. By attaching a pulsejet engine to a rollercoaster model, riders are given the opportunity to take to the sky in a blaze of glory – literally.

The burning carousel only seats two people, as any more would likely burn the eyebrows off of someone’s face. In addition, the pulse engines seem to require a more manual start up than rides meant to be operated by bored teenagers or carnies.

This is not the Madagascar Institute’s first time playing with jet engines. In 2006, they affixed a pulsejet engine to a motorcycle for a Mad Max style ride.

A video posted to Vine shows four different people directly involved with starting the merry-go-round, with one man at the helm of the controls. However, the video also features the attraction making so much noise that it sets off a car alarm, so it may not be appearing at your state fairgrounds anytime soon.