Donald Trump’s long-time attorney Michael Cohen’s guilty plea is bad news for the US President. However, it’s not the hammer blow that his adversaries think it is.

In a federal court in Manhattan on Thursday, Cohen pleaded guilty to making false statements to Congress in 2017.  In statements given to the Senate Select Committee on Intelligence, Cohen said that Trump’s efforts to build a Trump Tower in Moscow ended in January 2016 and were not discussed with other members of the Trump company. He also said that he never planned to travel to Moscow to pursue the project, and had received no word from the Russian government regarding approvals for it.


Now, Cohen admitted that the project actually lasted until June 2016 and was discussed extensively with members of the Trump company. Cohen said he discussed traveling to Moscow with Trump, and that he had been contacted by a press secretary to Russian President Vladimir Putin, who Cohen had asked for assistance in moving the construction project forward.

Cohen’s admission appears to contradict Trump’s repeated assertions that he had no business dealings in Russia during his campaign. Trump has denied the Russia connection multiple times, including during a televised debate with Hillary Clinton that October.

I don’t know Putin, have no deals in Russia, and the haters are going crazy – yet Obama can make a deal with Iran, #1 in terror, no problem!

Cohen’s testimony is not backed by hard evidence but, even if it were and if Trump outright lied during the debate, he won’t be dragged away in irons. Lying to Congress, as Cohen did, is a federal crime. Lying on television, on the other hand, is just a bit shady.

Twitter was abuzz with talk of indictments for Trump after news broke of Cohen’s guilty plea on Thursday morning. However, the Mueller probe was established to find evidence of collusion between the Trump campaign and Russia to influence the 2016 election. The charges against Cohen were unrelated to collusion, and the attorney’s guilty plea does not implicate Trump in any ‘collusion-related’ crime.

More Trump crimes. More Trump lies. How many smoking guns does it take for Washington to recognize that this president poses a real and present danger to our country? https://t.co/lbDGPvrFdV

Could Democrats launch an effort to have Trump impeached? Possibly, but highly unlikely. Some Democrats, like Reps. Maxine Waters and Al Green, have already called for the president’s impeachment dozens of times before, for petty ‘crimes’ like asking NFL players to stand for the national anthem, and “being such good friends with Putin.”

Although Democrats now control the House of Representatives, presumptive speaker Nancy Pelosi has shot down talk of impeachment, calling it a “divisive” activity, and one that shouldn’t be done “for political reasons.”


Trump was well within his rights as a businessman to pursue deals in any country he chose to, including Russia. Even if his apparent obfuscation of the truth fell under the “high crimes and misdemeanors” necessary to trigger impeachment proceedings, these proceedings would be dead in the water from the get-go.

After securing a majority in the House, the motion to impeach would then go to the Senate, where it would need a two-thirds majority. Republicans control the Senate 53-47, making chances here infinitesimally small.

The most likely result for Trump will be a fresh round of investigations launched and committees convened by House Democrats. The president’s relationship with Russia will likely come under increased scrutiny, but it remains to be seen whether a House committee can find something that Mueller’s multi-year, $20 million probe hasn’t yet. 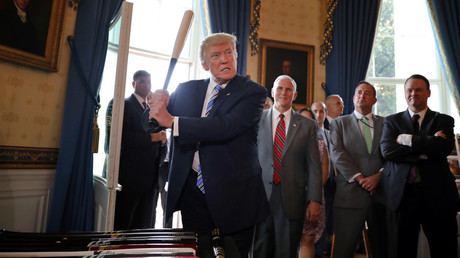 Speaking to reporters on Thursday, Trump accused Cohen of “lying” to secure a shorter sentence. Cohen confessed to tax evasion and campaign finance violations in August, and is due to be sentenced in early December. Cohen is facing a possible term of 46 to 63 months in prison and a potential fine of up to $1 million. His voluntary cooperation with Mueller, however, could see this punishment lessened significantly.

For Trump, Democrat-led investigations are unlikely to chip away at his popularity among Republican voters, the majority of whom would support him even if Mueller proved his campaign conspired with Russia. Trump vowed this Wednesday to respond to any investigations with a “devastating” document release that he said would expose the FBI, the Justice Department and the Clinton campaign as conspiring against him.

“If they go down the presidential harassment track, if they want go and harass the president and the administration, I think that would be the best thing that would happen to me,” he told the New York Post. “I’m a counterpuncher and I will hit them so hard they’d never been hit like that.”