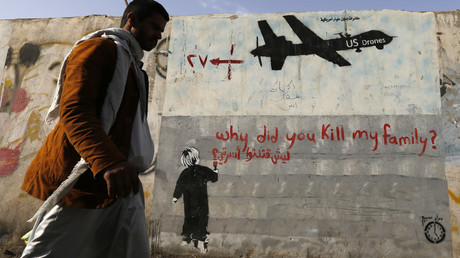 They sit in rooms resembling hi-tech shipping containers. Joysticks in hand, they spend hours watching grainy screens, displaying people in faraway lands going about their daily lives — and they hold life and death in their hands.

They are the men and women who operate the United States’ controversial drone warfare program — and they frequently get it disastrously wrong.

A newly-released report by the Associated Press claims that one third of people killed by US drones in Yemen this year were civilians with no association to terror groups like Al-Qaeda, the intended targets.

But intention and reality often diverge sharply when it comes to death by US drones — and the horror is not confined to Yemen. From Pakistan to Afghanistan, to Iraq, Syria and Somalia, US drone strikes — which are often hailed by the US military and government as “precise” and even “surgical” — have killed scores of innocent civilians.

In recent years, multiple whistleblowers — former drone technicians, camera operators and image analysts —  have come forward to shed light on the horror and reality of what US drone bombing really entails. Perhaps an indicator of the level of stress involved, the people who do these jobs also quit them in record numbers. In 2015, an internal Air Force memo published by the Daily Beast revealed that there was a serious “outflow” problem with drone pilots due to the “unrelenting pace of operations.” Even when the Air Force began to offer six-figure salaries, it did not stem the outflow from the program.

But long, arduous shifts and high pressure are just the “official” explanations for the outflow problem, Laurie Calhoun, the author of ‘We Kill Because We Can’, an in-depth look at the US’ drone war, told RT.

Apostate operators and sensors have become disenchanted with the profession and are plagued by feelings of regret and guilt for having agreed to kill on command people who never threatened them personally with death.

In the drone age, Calhoun says, while the operators risk no physical harm, the explanation for their PTSD must derive from “moral factors.”

‘Killing fellow humans on the other side of the planet’

It’s easy to assume that the men and women operating drones are entirely detached and unfeeling maniacs, but often they are ordinary men and women who are lured with high salaries and assured by the military that they will be part of something morally good and justifiable.

READ MORE: Life in fear: Report says 1 in 3 US drone-strike deaths in Yemen are civilians, including children

Christopher Aaron, a former image analyst, who worked at the Counterterrorism Airborne Analysis Centre in Langley, Virginia and in Afghanistan as an intelligence liaison, told RT that he began to have second thoughts about the work during his first deployment in 2006 when he noticed how the military would celebrate successful kills, but the next day he would see “more than the intended number of targets” in funeral processions on the screens in front of him.

Some of Aaron’s colleagues also began to doubt what they were doing, but did not know how to express their concerns to senior management, he said. “We kept it internal. The military itself did not want to hear dissenting voices, only the intelligence they required.”

When he finished his second deployment in 2009, Aaron became extremely ill, physically and emotionally. It took five years for him to regain his health, through a combination of self-care and being able to speak out publicly about what he had experienced.

The cognitive dissonance amongst those who work in an office killing people on the other side of the planet remotely, and then leave work and go to the grocery store, the gym, or to their families, can only be suppressed for so long.

While many, like Aaron, experienced mental anguish over the drone kills, it is certainly true, Calhoun said, that the military at least tries to select candidates for the job “who are unlikely to experience compunction upon killing their fellow human beings.”

Potential candidates can sometimes be “vetted” by testing them on video games and exposing them to “kill TV” in which they view footage of people being incinerated by drone strikes. Anyone who balks or raises questions could be removed from consideration for the program, she said. Even more disturbingly, she explained, people who are already inclined toward criminal behavior can now command lofty salaries for killing people without any risk of death or incarceration for doing so.

In ‘National Bird’, a 2016 documentary about the devastating impacts of US drone wars, investigative journalist Sonia Kennebeck spoke to three other whistleblowers who have been trying to expose the dark realities of the drone program.

One man, identified only as Daniel, was a homeless teen whose male family members were in prison for petty crimes. Another, Heather Linebaugh, was a high-school graduate looking for a way out of rural Pennsylvania — not the kind of callous psychopaths you might imagine are drawn to a job that involves treating human beings, who often cannot be accurately identified, like video-game targets.

“I was under the impression that America was saving the world, like, that we were Big Brother and we were helping everyone out,” Linebaugh told Kennebeck.

“It’s so primitive, raw, stripped-down death. This is real. It’s not a joke,” she said.

You see someone die because you said it was okay to kill them. I was always shaking. Sometimes I would just go to the bathroom and just sit on the toilet. I mean just sit there in my uniform and just cry.

For Linebaugh, after three years on the job, the psychological trauma proved too much and she was diagnosed as suicidal. Two of her colleagues committed suicide and many others relied heavily on alcohol.

Another former imagery analyst, Michael Haas, told Rolling Stone, that he and his colleagues would call alcohol “drone fuel” because it essentially “kept the program going.”

“Everyone drank. There was a lot of coke, speed, and that sort of thing,” Haas said. “If the higher ups knew, then they didn’t say anything, but I’m pretty sure they must have known. It was everywhere.”

READ MORE: Trump’s military drops a bomb every 12 minutes, and no one is talking about it – Lee Camp

Could it be the case that the higher ups turn a blind eye to this substance abuse because it produces the necessary results? Whistleblower Brandon Bryant told Rolling Stone that when he first arrived at the Creech Air Force base outside Las Vegas, Metallica heavy metal music was played to get new recruits prepared for the job. “Gentlemen! Welcome to Creech,” an officer announced. “While here, it will be your job to blow shit up and kill people!”

There is a common misconception that the use of drones minimizes civilian casualties, but the facts and figures do not back up that claim. In a shocking 2014 figure on Pakistan, US drones killed an estimated 1,147 people while attempting to take out 41 men with links to terror groups.

Targets are chosen based on intelligence which comes from informants, but strikes can also be carried out based on observations of suspicious patterns of behavior in potential targets. Operators technically have “no way of knowing whether the analysis on which an order to kill rests is sound,” Calhoun said, who explained that while the execution of an unarmed and unthreatening person is considered a war crime when committed by a soldier on the ground, it is deemed acceptable if done from the air. “Those who ponder this question are likely to abandon the profession,” she said.

And those who go further and blow the whistle have already faced government intimidation. The man identified as Daniel in Kennebeck’s documentary estimated that as many as 50 FBI agents were involved in a raid on his home, during which documents and electronics were seized. “To me, that’s simply an attempt to silence whistleblowers,” his lawyer, Jesselyn Radack said.

READ MORE: Remote controlled killing: Drone warfare reduces horrors of conflict for those who can afford it

In 2015, hours after Bryant testified before the German parliament about the “essential” role played in the US’ drone war by the Ramstein air base, the whistleblower’s mother was confronted at her home in Montana by two air force officers who told her she was on Islamic State’s (IS, formerly ISIS) “hit list” — another clear case of intimidation according to Radack, who also represents Bryant.

But for people like Aaron, moral questions prevail, because it seems like the killings only lead to more violence and radicalization on the ground. For Islamist militants and radical preachers, the US drone war has become a rallying cry for more recruits in their insurgency, and each of the innocent casualties only adds to their numbers.

How many more ‘terrorists’ have we now created, from those impressionable boys who see the prophecy of their teacher come true?