The voice of a “dying” senator on the major reshuffle in the Trump administration is of no great importance, special assistant to the US president Kelly Sadler believes, according to media reports, citing sources. 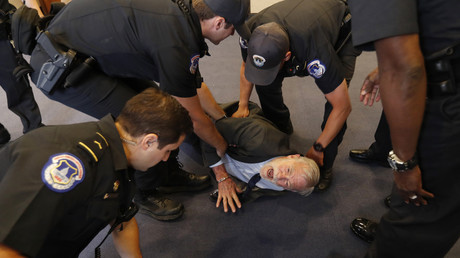 “It doesn’t matter, he’s dying anyway,” Sadler reportedly said during a closed-door White House meeting of communications staffers on Thursday. The bizarrely irreverent remark was made in the course of a discussion on Gina Haspel’s controversial nomination to lead the CIA, and McCain’s stance on it.

Arizona Republican McCain made no secret of the fact that he offers no support for the divisive nominee. On Wednesday, the politician called on his fellow senators to reject Haspel’s nomination, slamming her “disturbing” role “in overseeing the use of torture by Americans,” and her “refusal to acknowledge torture’s immorality.”

The 81-year-old senator himself did not respond to the mocking comment, but his wife Cindy McCain stepped in.

“May I remind you my husband has a family, 7 children and 5 grandchildren,” she tweeted. The post gained more than 50,000 likes and over 20,000 shares as of Friday morning.

Many social-media users commented to offer their support and prayers for her husband, who has been battling brain cancer. They have also called for the White House official to be sacked, launching the #FireSadler hashtag.

@kellysadler45 May I remind you my husband has a family, 7 children and 5 grandchildren.

Some, however, were not so kind. “I don’t feel bad about @kellysadler45 words,” one person wrote, gaining two dozen likes and some opposing comments.

As the backlash continues to gain momentum, sources told media outlets that Sadler called Meghan McCain, but the conversation did not go smoothly. Meanwhile, the White House had to break its silence on the reports. Without denying that the comment had been made, they said: “We respect Senator McCain’s service to our nation and he and his family are in our prayers during this difficult time,” according to AP.