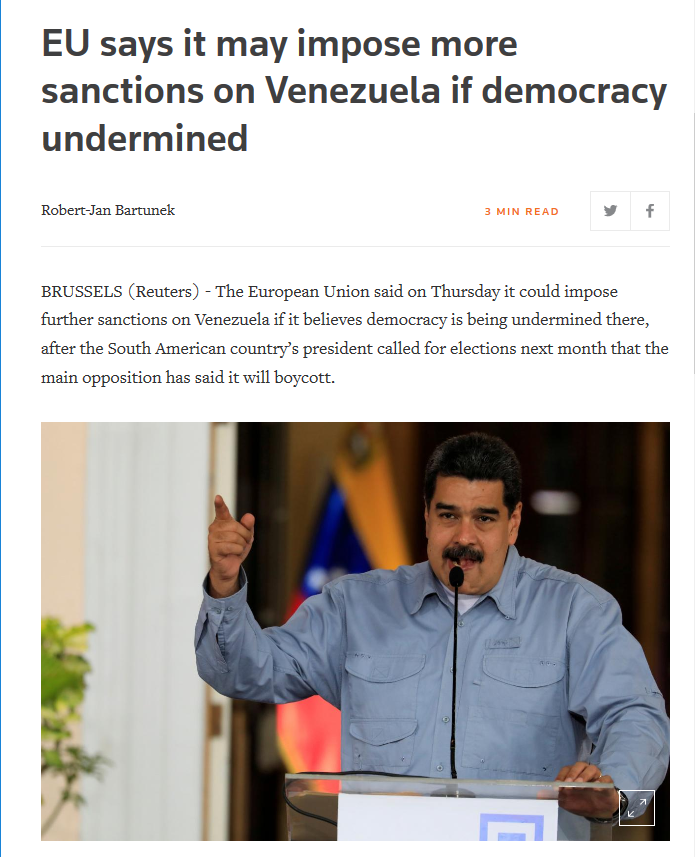 A Reuters article (4/18/18) reports that the European Union “could impose further sanctions on Venezuela if it believes democracy is being undermined there.”

The line nicely illustrates the kind of journalistic shorthand Western media have developed, over years of repetition, for conveying distortions and whitewashing gross imperial hypocrisy about Venezuela.  A passing remark can convey and conceal so much.

The EU’s sincerity in acting on what it “believes” about Venezuelan democracy is unquestioned by the London-based Reuters.  Meanwhile Spain, an EU member, is pursuing the democratically elected president of Catalonia, Carles Puigdemont, for the crime of organizing an illegal independence referendum last year. Weeks ago, he was arrested in Germany at Spain’s request, and other elected representatives have been arrested in Catalonia, where Spain’s federal government deposed the elected regional government after the referendum.

In July 2017, a few months before the referendum in Catalonia, Venezuela’s opposition also organized an illegal referendum. One of the questions asked if the military should obey the opposition-controlled National Assembly, which was an extremely provocative question, given the opposition’s various efforts to overthrow the government by force since 2002.  The referendum required an extremely high level of political expression, organization and participation. It allegedly involved 7 million voters. The Venezuelan government disregarded the results—as Spain disregarded the Catalan referendum results—but unlike Spain, did not jail people for organizing it, or send police to brutally repress voters. In fact, two weeks later, Venezuelan voters (overwhelmingly government supporters, since the opposition boycotted and did not field candidates) were violently attacked by opposition militants when they elected a constituent assembly.  The attacks resulted in several deaths.

Venezuelan President Nicolás Maduro has hardly failed to call attention to the hypocrisy of both the EU and Spain, but the Reuters article made no mention of it.

Reuters also reported that “the country’s two most popular opposition leaders have been banned from competing” from Venezuela’s presidential election on May 20. Reuters didn’t name the two supposedly “most popular opposition leaders,” but in the past (e.g., 4/12/18, 2/28/18, 2/19/18) the wire service has identified them as Leopoldo Lopez and Henrique Capriles. As it happens, according to the opposition-aligned pollster Datanalisis, whose results have been uncritically reported by Western media like Reuters for years, opposition presidential candidate Henri Falcón has been significantly more popular than Capriles in recent months, and barely less so than Lopez. 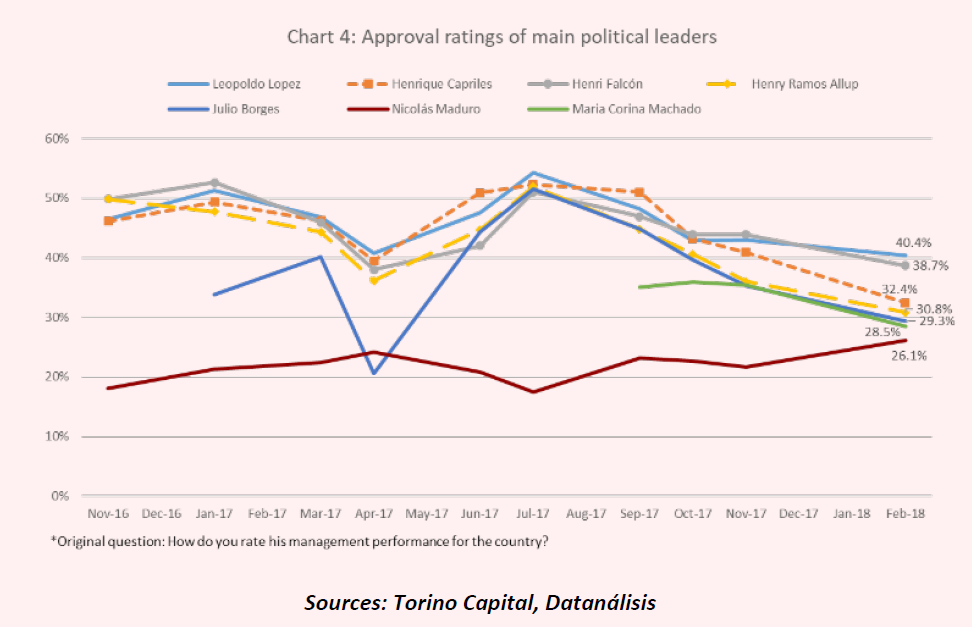 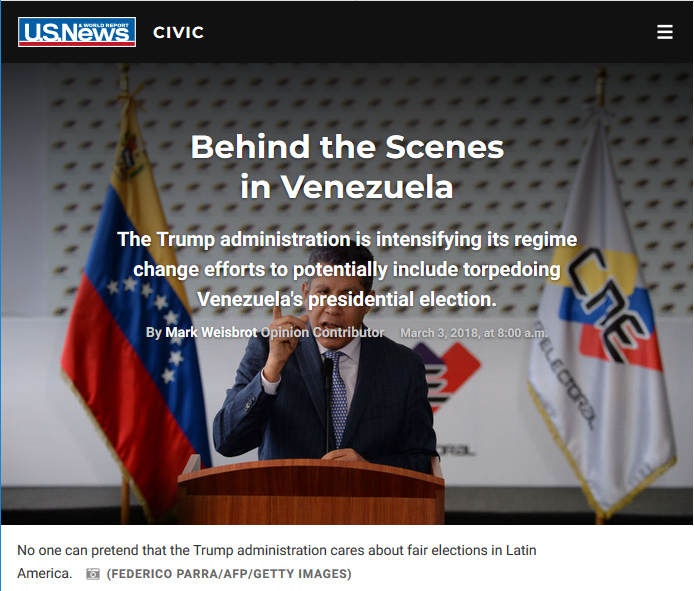 Mark Weisbrot writes in US News (3/3/18) that US policy toward Venezuela is being set by Marco Rubio, “a hardliner who does not seem interested in an electoral or negotiated solution to Venezuela’s political crisis.”

Mark Weisbrot (in an opinion piece for US News, 3/3/18) broke the news that US government officials had been secretly pressuring Falcón not to run, so that the election could be discredited as including no viable opposition candidate. Two weeks later, Reuters (3/19/18) discreetly reported Weisbrot’s scoop.

However, by far the most important thing Reuters neglects telling readers about the “two most popular opposition leaders” is that had they done in the EU what they’ve done in Venezuela since April 2002, Lopez and Capriles would both be serving long jail terms.

Capriles and Lopez together led the kidnapping of a government minister during a briefly successful US-backed military coup in 2002 that ousted Venezuela’s democratically elected president, the late Hugo Chávez, for two days. Lopez boasted to local TV that the dictator installed by the coup (whom Lopez called “President Carmona”) was “updated” on the kidnapping.

Imagine what Carles Puigdemont’s predicament would be if, rather than organizing a peaceful referendum, he had participated in a foreign-backed, ultimately unsuccessful military coup against the Spanish government. Needless to say, running for public office would not be on the table. That would be the least of his worries.

In Venezuela, Capriles eventually served a few months in prison for participating in the coup, while Lopez avoided doing any time, thanks to a general amnesty granted by Chávez. Lopez was finally arrested in 2014 for leading another violent effort to overthrow the government.

I’ve reviewed before (teleSUR, 1/9/18) violent efforts to overthrow the government that Lopez, Capriles and other prominent opposition leaders have been involved with since the 2002 coup. I also described how Julio Borges and Henry Ramos (two other prominent opposition leaders) have openly sought to starve the Venezuelan government of foreign loans as it struggles with a severe economic crisis.

In August, Trump’s administration imposed sanctions on Venezuela’s entire economy that will cost Maduro’s government billions of dollars this year (FAIR.org, 3/22/18). It has threatened to go even further, brandishing an oil embargo or even a military attack. With sufficiently compliant media (and the collusion of big human rights NGOs like Amnesty International), such depravity becomes possible.

The Reuters article also says that Venezuela’s economic “collapse has driven an estimated 3 million people to flee the country.” No need to tell readers when the economic “collapse” began—2014—much less who made the estimates or if other sources contradict them. In fact, the UN’s 2017 population division numbers estimate Venezuela’s total expat population as of 2017 at about 650,000—only about 300,000 higher than it was when Chávez first took office in 1999. Even a group of fiercely anti-government Venezuelan academics estimated less than 1 million have left since the economic crisis began. (See FAIR.org, 2/18/18.)

Cherry-picked statistics aside, when Western powers want a democratically elected government overthrown, the approach is clear. Complete tolerance for violent foreign-backed subversion—which the powerful states and their allies would never be expected to tolerate—becomes the test for whether or not a state is a democracy. The targeted government fails the test, is depicted as a dictatorship, and all is permitted. Only the tactics required to bring it down need be debated.

Messages to Reuters can be sent here (or via Twitter: @Reuters). Please remember that respectful communication is the most effective.