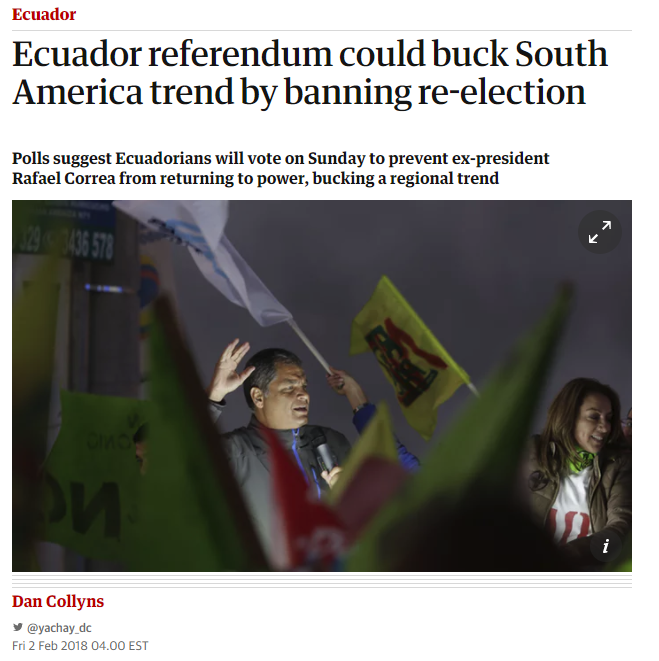 In an article for the British Guardian (2/2/18), Dan Collyns wrote:

But since taking office, Moreno—the world’s only wheelchair-using head of state—has made good on his pledge to be his own man.

What Lenín Moreno actually pledged during his election campaign several months ago was to continue the “Citizens Revolution” of Rafael Correa, whose left-wing government Moreno was part of for 10 years. Moreno called Correa the greatest president Ecuador ever had during the campaign. And here is a video of Moreno leading a crowd in cheers of “Rafael! Rafael!” at a campaign rally.

Moreno is now, through a referendum that he never proposed on the campaign trail—it was actually proposed by his right-wing opponent—asking voters to  (retroactively) re-impose term limits, handpick a body with “transitional” powers to fire 150 authorities (judges, prosecutors, regulators etc.…) and drastically reduce taxes on wealthy land-speculators. Moreno did not campaign for any of those things.

He is now also talking about a “free trade” deal with the United States—another policy he would never have dared to propose while he needed Correa’s support to get elected. Further, Moreno has given Ecuador’s private banks exclusive control over electronic money—which he never would have proposed while he needed Correa.  In 1999, the private banks, after years of corruption and deregulation, totally crashed Ecuador’s economy.  Reining them in, including their media power, was key to the economic success Ecuador had under Correa.

In short, as many Latin American politicians did during the neoliberal ’80s and ’90s, Moreno campaigned left then governed from the right.  Wasn’t Moreno perfectly free to “be his own man” as a presidential candidate, by resigning from Correa’s government and running as the right-wing politician that he became after the votes were counted? 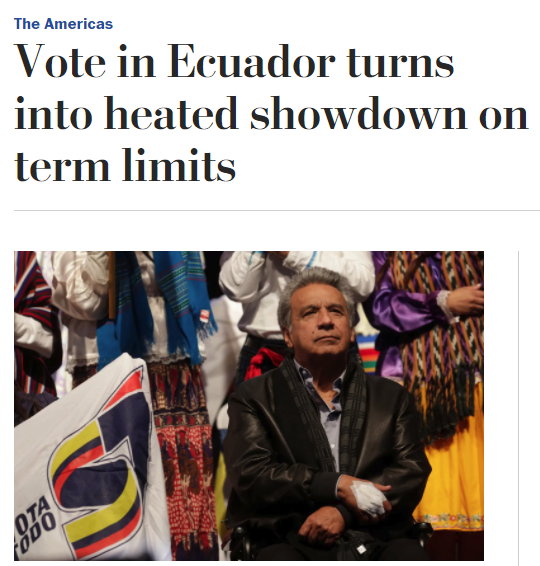 The Washington Post (2/2/18) presents a dubiously constitutional referendum that would bar the president’s chief political rival from running against him as a blow for political reform.

Collyns isn’t the only Western reporter to ignore this question. A Washington Post article (2/2/18) put it: “Long expected to follow Correa’s political lead, Moreno has instead charted his own path.” Moreno was indeed expected to follow through on his central campaign promises, not his right-wing opponents’.

How can Moreno get away (so far) with his post-election about face? By quickly turning on Correa, he immediately won over Ecuador’s big private media, and quickly made changes to public media so that it provided negligible opposition to his right turn.  For example, Moreno promptly put a former editor of the right-wing newspaper El Comercio in charge of the government-run El Telegrafo. The results were obvious during a January 21 TV interview broadcast across the country, in which journalists from two right-wing networks and a third from public media interviewed Moreno.

I wrote in more detail about that TV interview in a piece (CounterPunch, 1/31/18) I wrote about the tax giveaway Moreno is promoting for Ecuador’s big land speculators. All three journalists reinforced the notion that Correa’s ten years in government were a disaster, characterized by excessive public debt and corruption. None challenged Moreno from a perspective that defended Correa’s record of reducing poverty, reducing crime and improving public services, which Moreno praised to the sky as a candidate in order to get elected. (Economists Ha-Joon Chang and JK Galbraith wrote about the economic achievements under Correa—and responded  to some of their critics.)

None of the journalists challenged Moreno over forcing through a referendum without a ruling from the Constitutional Court on the questions. A leaked recording of a meeting of the Constitutional Court judges on November 28 revealed that some judges feared for their safety after Moreno publicly “demanded” that the court approve all the referendum questions. Judges at the November 28 meeting pleaded with the president of the Constitutional Court to put out statements explaining that they were within the legal time limit to make a ruling. A judge, Tatiana Ordenena, had in fact already prepared a report, over 300 pages long, that made extremely important edits to two of seven questions voters will be asked on February 4.

Her report allowed Moreno to ask voters to re-impose term limits, but not to make them retroactive to 2008. Her edit would therefore have opened the door to Correa and many of his allies running again for positions they had been elected to between 2008 and the present day. Even more importantly, her report gutted a proposal to allow Moreno (no doubt in partnership with the banks and other unelected power brokers who now have his back) to fire and replace about 150 different authorities: judges, prosecutors, electoral authorities and regulators.

A day after the November 28 meeting, Moreno simply called the referendum by decree, obviously not willing to take any chances that he would not receive the blank check from the court that he had publicly “demanded.” At the meeting, none of the judges seemed to consider that Moreno would bypass the court. The meeting for a final ruling was set for December 5.

Moreno justified his decree by pointing to a referendum Correa had called by decree in 2011 that allowed the residents of a small town to vote on which province they officially wanted to reside. That local referendum made no constitutional amendments—obviously, since it involved a minuscule fraction of Ecuador’s electorate. According to Correa, the court simply let the time limit expire and, at any rate, a regulation was passed in 2015 that allows the court to extend its legal time limit for ruling on referendum questions.

Moreno did not cite any national-level referendum called by Correa without a constitutional court ruling, because Correa would never have gotten away with one. The outcry nationally and internationally would have been deafening. Moreno’s bullying of the judiciary gets passed over in silence by Ecuador’s media, and the international media follow suit.

The Guardian’s Collyns (2/2/18) referred to Correa’s “authoritarian style,” while disregarding the authoritarian substance of Moreno’s behavior. The Washington Post article  (2/2/18) called Correa a “strongman”—an impossible to define (and therefore refute) term which is used to smear democratically elected leaders corporate media do not like—but didn’t say a word about Moreno bullying judges and ramming through the referendum by decree.

Similarly, Ecuador’s new media uniformity, which enabled Moreno’s successful bullying of the Constitutional Court, is portrayed as a welcome injection of press freedom. An article in USNews.com (2/1/18) raved about Moreno’s “tolerance of independent journalism.”

Clearly, Ecuador is not the only country whose mass media could use a lot more ideological variety and critical thinking.