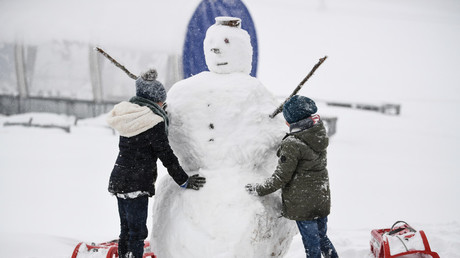 Weather Channel reporter Mike Seidel was mocked on Twitter for bringing woke politics to his weather reports, after he called a snowman a “snowperson.”

“1st snowperson of the season and the 2nd snowfall in less than a week in Nashua, NH,” he tweeted on Monday, presumably deploying the gender-neutral term ‘snowperson’ to avoid triggering all the snowwomen and non-binary snowtranssexuals out there.

1st snowperson of the season and the 2nd snowfall in less than a week in Nashua, NH. Thanks to @TheMattSaffer for the eyes, nose, etc.
Thanksgiving forecast to be the coldest on record in nearby Boston with a high of 21° and wind chills in the single numbers. pic.twitter.com/1xpFts6ORL

Seidel’s uber-2018 language was instantly mocked on Twitter. “Frosty the Snowperson…just doesn’t have the same ring to it,” one commenter wrote.

Believe it or not, Seidel’s tweet was not the first reference to androgynous snow-people this winter season. In Britain, the BBC was ridiculed earlier this month when a children’s presenter called snowmen ‘snowpeople.’ Cantankerous TV host Piers Morgan mocked the broadcaster, and even Star Trek actor WIlliam Shatner joined in, tweeting “the whole world’s going cray!”

The modern trend towards stripping children’s icons of their nasty, toxic masculinity has begun to creep into the festive season as of late. A tongue-in cheek petition to rename Santa “person Christmas” fooled several Australian tabloid newspapers last year, but a very real Slate article five years ago suggested stripping Father Christmas of his white, masculine identity and reimagining him as a cuddly, completely inoffensive penguin.