The mayor of Tijuana blasted the government for leaving the city helpless as it struggles to cover the needs of some 5,000 caravan migrants. The city’s resources are stretched to the limit and it will not bear more, he said.

Tijuana, a city on the US-Mexico border, just across from San Diego, has seen an influx of Central American migrants that had set out in caravans from Honduras and Guatemala in early October hoping to reach the US. According to the mayor, 4,976 migrants have arrived to the city, with the majority of them finding shelter at a sports complex, which authorities temporarily converted to house them.

The presence of hundreds of distraught migrants has taken its toll on the city, with clashes reported between locals and the unwanted guests. The upkeep of the migrants has cost Tijuana a hefty sum – nearly 550,000 pesos a day [$27,000], mayor Juan Manuel Gastelum said Friday, accusing the government of lackluster response to the crisis and unwillingness to share the burden.

“We do not have the necessary and sufficient infrastructure to fully attend to these people to give them a decent space,” Gastelum said at a press conference, adding that he will not pay for the migrants’ stay in the city with the money intended for the locals.

“I will not spend Tijuanans’ money, I will not bring Tijuana into debt now, in the same way, we haven’t done so these past two years,”

the mayor said. Accusing the administration of outgoing President Enrique Peña Nieto of turning its back on the increasingly difficult situation in the city. Gastelum said that Tijuana had to appeal to international organizations, including the UN, for assistance.

“We are in a humanitarian crisis and the federal government must be held accountable!” Gastelum tweeted.

Gastelum, who is in opposition to the current Mexican government, has been vocal in his disdain for the federal authorities and has sided with US President Donald Trump. Gastelum stirred controversy after he was spotted wearing a red “Make Tujuana great again” cap, and invited an endorsement by the US President himself, who tweeted that like Tijuana, the US is “ill-prepared for this invasion.” 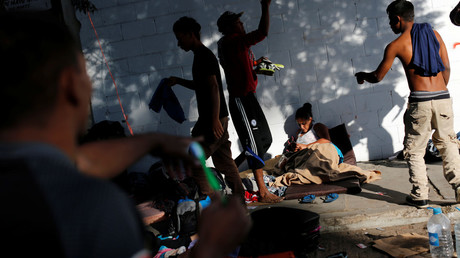 While Gastelum has not been a popular figure among the Tijuanese, with his approval rating in single digits, many locals appear to support his anti-migrant stance. Last Sunday, dozens of protesters took to the city streets chanting “Tijuana first” and “Long Live Mexico.”

One source of the residents’ growing concern is the surging crime rate associated with the caravan migrants, who often lack proper accommodation, food and basic utilities.

The city authorities have released new data on Friday which states that 108 Central American migrants have been arrested so far, including 104 for administrative offenses, such as possession of drugs, public intoxication and disturbance. The remaining four are to be prosecuted for robbery, fights and insulting authorities.

Gastelum has recently drawn backlash and was forced to apologize for calling migrants “bums” and “pot smokers” preoccupied with nothing but disturbing the “tranquility and security of Tijuana.”