Janine Jackson interviewed Peter Bibring about excessive force law for the April 13, 2018, episode of CounterSpin. This is a lightly edited transcript.

Janine Jackson: Amy Hughes was not suspected of a crime. She was standing still, outside of her home in Tucson, holding a kitchen knife by her side. Three police officers, responding to a “check welfare” call about a woman hacking at a tree, arrived and saw Hughes’ roommate, Sharon Chadwick, in the yard, and Hughes some six feet away from her. An officer yelled at Hughes to drop the knife. It’s not clear whether she heard.

Neither two of the three officers called to the scene, nor Chadwick herself, felt that Hughes was threatening. The third cop, Andrew Kisela, felt differently, and without warning shot Hughes four times through a chain-link fence. She survived, and did not go quietly, suing for the violation of her Fourth Amendment rights. The Supreme Court, however, has just ruled that Kisela can’t be sued, that he’s covered by something called “qualified immunity.”

Among myriad disheartening aspects in this case should be included the idea that many had, that there was a greater chance of making charges of excessive force by law enforcement stick in Amy Hughes’ case, because she isn’t black (although she has a history of mental illness—and people with disabilities, along with LGBTQ people—are also disproportionately likely to be shot by law enforcement).

What can we possibly see as the lesson of the court’s ruling in this case, and where do those who seek accountability—not to speak of justice—go from here? Peter Bibring is the director of police practices at the ACLU of Southern California. He joins us now by phone from Los Angeles. Welcome to CounterSpin, Peter Bibring.

Peter Bibring: Thank you for having me.

JJ: Kisela v. Hughes was a 7-2 ruling, not a close one. Sotomayor, with Ginsburg in the dissent, said the decision “tells officers they can shoot first and think later.” Is there another possible interpretation in what the Court has said here? What do you make of it? 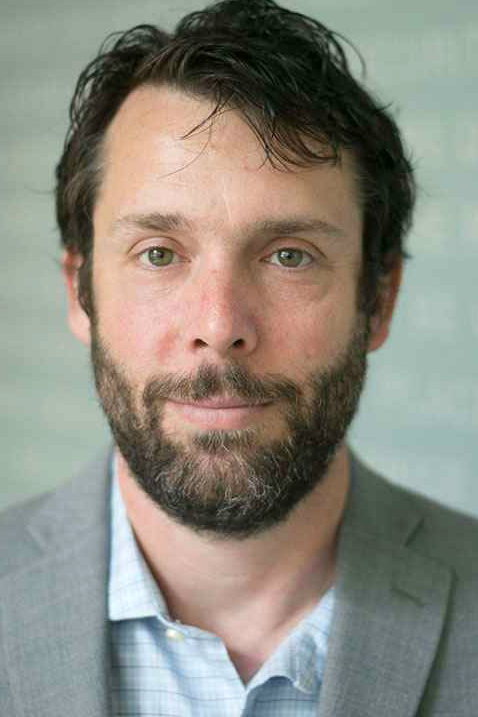 Peter Bibring: “The Constitution, as this Supreme Court has interpreted it, does not require officers to use deadly force [only] as a last resort.”

PB: I think Kisela is disheartening for anyone who expects the Supreme Court to provide a meaningful check on police shootings and excessive force. First of all, there is the standard that the court uses in evaluating police force cases, under the Fourth Amendment. That standard does not require that an officer who shoots do so only if there are no other alternatives. There may be other alternatives that officers could have pursued, but the Constitution, as this Supreme Court has interpreted it, does not require officers to use deadly force as a last resort.

The second issue in the Court’s opinion is their interpretation of a doctrine called “qualified immunity,” which is a little bit technical, but basically a doctrine that says, courts shouldn’t hold police officers liable, it shouldn’t even allow officers to be sued, unless their conduct was clearly against the Constitution.

And one of the things that the court said is that because there wasn’t a case exactly like this one, the officer, even if this conduct was a violation of the Constitution, wouldn’t have a reason to know. That is a very troubling holding here, because the Court didn’t even let the case go forward, because it held that a reasonable officer could not even have known, would not have had fair warning, that the Constitution might prohibit an officer from shooting in this situation.

And given the facts that you describe, it’s really extraordinary. It’s worth emphasizing: The officer shot Hughes through a chain-link fence. There was no question that the officers’ lives were not in danger. The only question was whether Hughes posed an immediate danger to the person standing next to her, which was her roommate. And the testimony showed that they were chatting and that Hughes seemed contented and not agitated in any way.

But the Court still said, it wasn’t a matter of a jury having believed the officer’s account over Hughes’ account. The court held that on the facts, even if Hughes provided evidence of them, that the case could not go forward.

The issue is that the federal Constitution and civil suits for damages, particularly under the construction that the Court has given in this case and in prior cases, just doesn’t provide a meaningful check on police use of force. Part of that is the standard of “reasonableness,” that doesn’t require officers to use deadly force as a last resort. Part of that is the doctrine of qualified immunity, that excuses officers from even shootings that might be unconstitutional, if there isn’t a prior case that clearly indicates that.

But another reason is just that money damages are not a very good deterrent anyway. There’s research that shows that individual officers effectively never pay money damages; it’s always the government, the local police agency, that pays. And the way that budgets are set up, that is never an effective deterrent. Either that money comes out of the city’s general fund or, even if it comes out of the department’s fund, it’s budgeted for, and departments that run over their budget simply ask the municipality for more money.

JJ: That’s exactly what I wanted to move on to, because cases like Kisela certainly encourage a person to think that the law is just not going to be the arena for justice on these issues. And that’s why people are in the street, you know? But we also need a multi-front fight. And so it’s very interesting to hear that in California, there is some possible forward movement in terms of policy or law. So maybe tell us more about this Police Accountability and Community Protection Act.

PB: Yeah, the bill, which is Assembly Bill 931, carried by Shirley Weber, an Assembly member from San Diego, would change the state law that authorizes police officers to use force, and be explicit that deadly force should be used only when necessary, only when alternatives—such as using de-escalation tactics to defuse a situation and avoid force, or using lesser alternatives — when those aren’t reasonable in the circumstances.

It would also make clear that an officer’s use of force would be evaluated not just on their decision to pull the trigger at that particular moment, but on the officer’s entire course of conduct. So that an officer who effectively creates a circumstance where they’re under an imminent threat might still not use force, legitimately, under this standard.

And a good example of that is, under the current constitutional law, an officer who jumps in front of a moving vehicle might be faced with a deadly threat of a vehicle coming towards them, and could potentially fire and kill the driver, even though they both created that circumstance by jumping in front of the car, and might have had alternatives as simple as stepping out of the way. 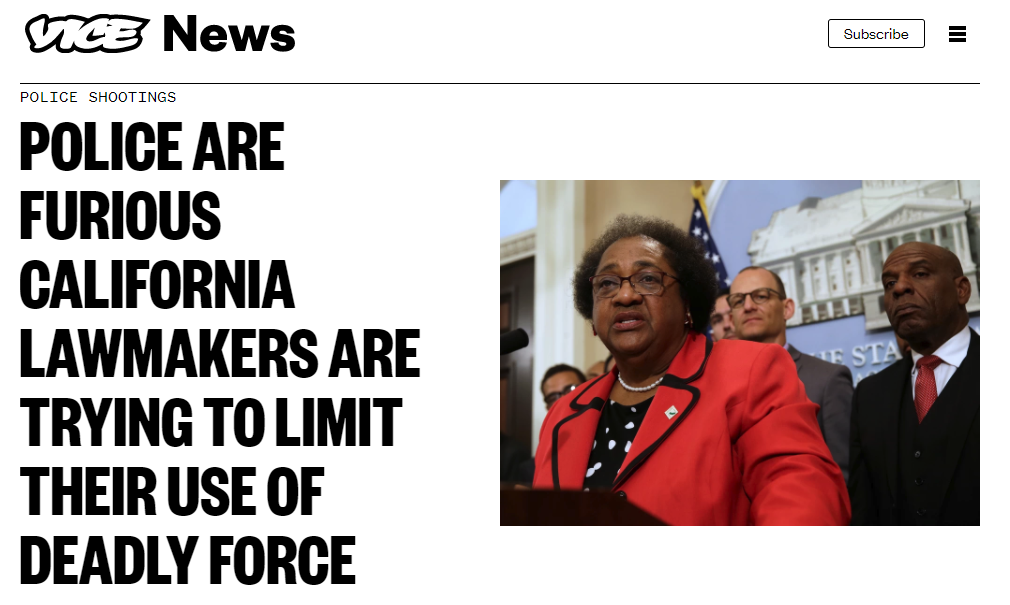 JJ: Right. Well, what do you make then, of the response? I mean, people knew as soon as this came forward, and this is of course in immediate response to the killing of Stephon Clark, but, of course, in really bigger-picture response to the thousands of killings by law enforcement of unarmed people, of people holding things that were not guns, in which we were constantly being asked to consider a decision made by law enforcement reasonable, even when a person captured on video appeared to be posing no threat. All of this led up to the putting forward of this law, of this bill, in California, and we could expect a big pushback from it. And here it is, you know?

And so we have the Los Angeles Police Protective League saying, “The new proposal demands that officers have a Monday morning quarterback’s perspective before game day on Sunday.” Followed by,  “If enacted, it will either get cops killed or allow criminals to terrorize our streets unchecked. Pick one.” And then the putatively sympathetic, that I’ve heard, which is, well, this is just going to change the words that cops use when they try to justify excessive use of force. How do you respond to that?

So first, some major law enforcement organizations—the Police Executive Research Forum and the International Association of Chiefs of Police, both associations of police management—have put out recommendations about use of force policies that recommend departments adopt higher standards than the constitutional minimum. Part of the problem is, police officers are essentially authorized to use any force that isn’t illegal under the federal Constitution. We can ask more of our police than that.

Some departments have, in fact, adopted these higher standards, particularly those that were under US Department of Justice supervision, so Seattle, Chicago recently adopted the higher use of force standard, and New Orleans and some others.

And in Seattle, there’s very clear evidence that since adopting a higher use of force standard, that requires necessity for deadly force, that looks at the officer’s entire course of conduct, that requires de-escalation, all the elements of this bill—their use of force has dropped, their crime rate has also dropped, and there has been no evidence that the use of force standards have put officers in any greater danger; officers haven’t been subject to assaults or additional danger because of this standard. So the bill puts in place a common-sense rule that police should only shoot people when they absolutely have to, and one that has proven effective.

JJ: We’ve been speaking with Peter Bibring; he’s director of police practices at the ACLU of Southern California. You can follow their work on this and other issues online at ACLUSoCal.org. Peter Bibring, thank you so much for joining us this week on CounterSpin.

PB: Thank you for having me.