Janine Jackson re-aired an interview with Megan Hustings about the criminalization of feeding homeless people for the August 17. 2018 episode of CounterSpin; it originally was broadcast on the January 13, 2017, show. This is a lightly edited transcript.

Janine Jackson: In the winter of 2017, seven people were arrested in Florida for the crime of serving food to homeless people in a public park. Media didn’t take much notice, though one wire report explained that while you might think feeding the hungry sounds good, it’s “actually a legally complicated matter that could violate laws and even send you to jail.”

CounterSpin asked Megan Hustings, director of the National Coalition for the Homeless, for some background on food-sharing, and what municipalities that criminalize it are hoping you’ll misunderstand.

MH: What’s key about food-sharing, especially as Food Not Bombs tends to do it, which is just going out into the community, into the parks where people congregate, is that it finds people where they are. We have someone, a long-time advocate who was homeless himself, who always says that homeless people are the least lazy out there, because they have to walk, you know, two miles from the shelter to get their lunch, and then two miles back to get dinner, and come back at night. So oftentimes, even though there might be free food or meals available, they’re not always convenient for folks who are staying outside. So those who do feed in public areas like parks are providing a very needed service.

JJ: Let’s talk about the pushback on that, because what one gets from the media coverage, which of course is kind of thin and occasional, is, oh sure, it sounds like a good idea, but there’s really these actually very good reasons that it’s not a good idea. What forms do the restrictions tend to take? 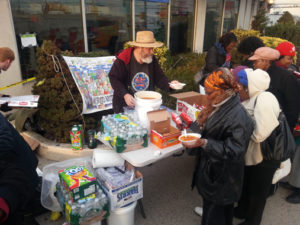 MH: They can take many forms. The restrictions that we know about have been anywhere from requiring a permit, which I believe is what is on the books in Tampa—permits to share food—and sometimes that requires that you do it actually indoors, or have some sort of facility where food prep is highly regulated. Orlando had a law on the books that said that you cannot share food with more than 25 people in public places, so folks were getting arrested when they handed out that 26th sandwich.

In general, these ordinances have been around for a very long time. We’ve been tracking them for about 20 years, and what we see is that, in general, what communities are in effect doing is making homelessness less visible. Even though that might not be the outward intention, that’s usually what happens.

And in the case of Tampa, we have to mention that there was a large college football event earlier this week, and so it was odd that even though there had been a law on the books for a very long time, that police and the city had not responded by asking the Food Not Bombs folks to move along until there was the event that a lot of people would be paying attention to in the city, and perhaps wanted not to see this kind of sharing of food or these, quote unquote, “types of people” in their city.

JJ: There seems to be this idea that somehow helping homeless people in this sense, and feeding them, is creating or driving homelessness, as though if you didn’t feed them, they wouldn’t exist? 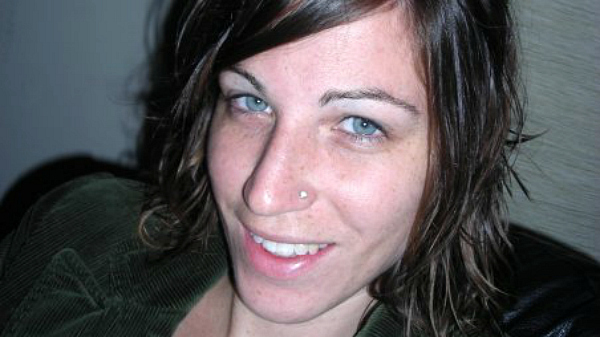 Megan Hustings: “What we see is not just restrictions on feeding, but also there’s been lots of laws that restrict camping or sleeping, even sitting down in public places.”

MH: Yeah, and we find that very troubling, especially troubling, because homelessness has so many causes, and something that we have really highlighted in recent years, with the increased number of encampments that are springing up across the country, is, first of all, there’s not enough affordable housing in our communities, but also there’s just not enough shelter, either. And unfortunately, even federal funding has been, in recent years, tailored more towards permanent supportive housing programs, which are extremely successful and really doing a great job of housing a small number of folks. And so there’s a lot more people who are just not finding the resources or the help that they need on a daily basis. But, again, I think what we see is not just restrictions on feeding, but also there’s been lots of laws that restrict camping or sleeping, even sitting down in public places, sitting on sidewalks or even benches.

There’s not just ordinances, but also subtle things that cities do, like putting arm rests in the middle of public benches so that you can’t lie down. Here in DC, we have bus stop benches that have little dividers between the seats, and they’re very, very skinny, so it would be very difficult to lie down and be comfortable.

So there’s these little things here that are subtly saying, we don’t want to see people who are homeless in our cities, in our downtown areas. You know, we try to move them along in any way we can. And we just think that this is really antithetical to ending homelessness, and truly doing something to help people get off the streets.

And we understand that there’s a lot of cities’ mayors who get a lot of feedback from their community that homelessness is a large problem, but we’re not going to solve it by saying, “You can’t be homeless here.” That’s not looking at all at the causes of why somebody is homeless, or really what the issues are that are preventing them from getting and affording long-term housing.

JJ: Let me just ask you, finally: I guess folks who are motivated to do things, we’re all going to have to decide what our relationship to the law should be when we disagree with those laws. That’s going to be a choice that, I guess, more and more folks are going to be making.

Let me ask you, are there not things that municipalities themselves can do? We hear about places making themselves sanctuary cities, so maybe there’s going to be a federal law that’s pressing deportation, but we’re going to make a statement that in our community we’re going to do things differently. Are there those sorts of tools available in terms of homelessness and feeding hungry people?

MH: Most definitely. Again, at the root of homelessness is the lack of affordable housing. Communities across the country, we’re all struggling to find housing that we can afford. So that’s the basic level; we really need more advocacy from folks, calling your legislators—they really do actually want to hear from you!—and being involved in advocacy efforts to really increase funding for affordable housing programs.

There’s also a number of cities who have endeavored to support encampments and folks who live in them while longer-term housing solutions are found. So there are some encampments across the country, some cities who have agreed to do things like trash pickup and mail delivery services, even, anything to provide a higher standard of living for folks who only have the ability to live outdoors, or there’s not a viable option for them to be indoors at the moment.

So that’s definitely something that we encourage. If there’s more of a realization that there are positive things we can do to ultimately end homelessness while also supporting the individuals who are on the streets right now, that’s much preferable to the alternative.

JJ: We’ve been speaking with Megan Hustings, director of the National Coalition for the Homeless. Find their work online at NationalHomeless.org. Thank you very much, Megan Hustings, for joining us this week on CounterSpin.

MH: Thank you. Thanks for having me.