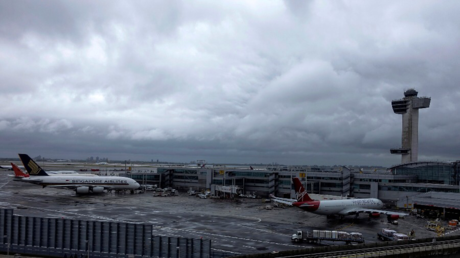 The winter-related chaos at New York’s JFK airport has gotten worse. After three days of flight disruptions due to the ‘bomb cyclone,’ a water main break caused a further shutdown of international flights into Terminal 4 Sunday.

The water main break resulted in Terminal 4 being flooded, triggering evacuations and causing a huge luggage pile-up. The incident also forced the suspension of international arrivals at the terminal. While departures were not affected, JFK airport managers warned passengers via twitter to expect “heavy” traffic into T4. Footage posted online showed water flowing into the arrival terminal, flooding the area.

“There are about three inches of water inside the west end of Terminal 4,” Airport Spokesman Scott Ladd said. “We have maintenance crews on the scene mopping and cleaning up. The inner roadway at the arrivals area is closed due to excess water, but the outer roadway is open.”

Thousands of flights were canceled or delayed at JFK due to the “bomb cyclone” winter storm that hit the Big Apple Thursday. The severe weather conditions continue to affect the airport. Nearly 50 flights were canceled and more than 300 delayed by Sunday afternoon, according to FlightAware. The reason for the rupture has not yet been determined, but the big freeze could be the cause, as the cold conditions has been affecting and damaging airport equipment in the past few days.

The winter storm conditions “created a cascading series of issues for the airlines and terminal operators over the weekend,” the Port Authority of New York and New Jersey, said in a statement Sunday. “These included frozen equipment breakdowns, difficulties in baggage handling, staff shortages, and heavier than typical passenger loads.”